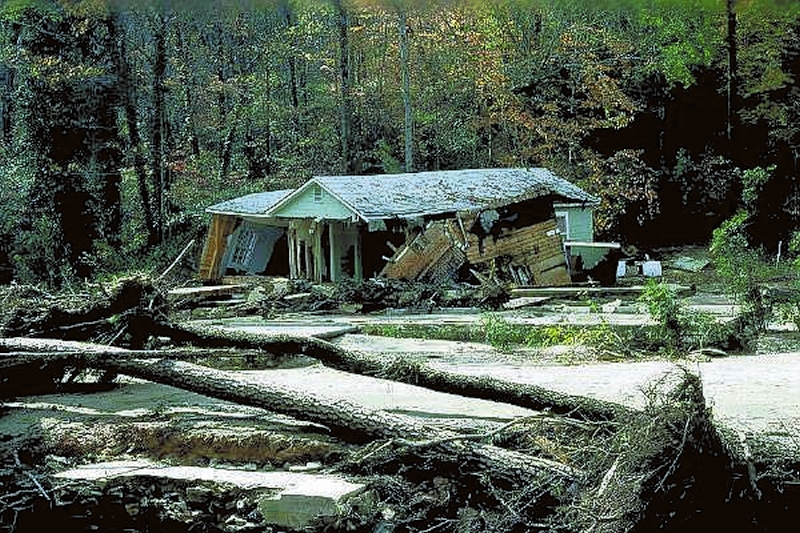 In 1977, the flooding water from a failed dam destroyed this dormitory on the campus of Toccoa Falls College. Photo from U.S. Geological Survey

On the Sunday before Halloween, a special excursion train will head from the N.C. Transportation Museum to the small town of Toccoa, Ga.

If the weather cooperates, passengers will take in a lot of fall colors on the trip. They’ll be able to spend time at the town’s harvest festival, and shuttles will take them to see beautiful Toccoa Falls, which at 186 feet is one of the tallest free-falling waterfalls east of the Mississippi River.

In reading about the excursion the other day, Rowan County Commissioner Greg Edds couldn’t help but feel nostalgic. Toccoa Falls College was a summer retreat for Edds when he was a boy.

His grandparents lived on the college campus. Grandfather Fred Hansen served as the school’s vice president while Edds was growing up in Winter Haven, Fla.

“We would usually travel with my folks to see my grandparents each summer,”  Edds says, “and my sister and brother and I would stay for a month or more. I still have friends today that I hung out with on campus each summer.”

Edds and his siblings swam almost every day in the campus lake, a pond they called “the pool.”  Edds says it was just a few hundred yards from the base of the falls, and it had a beach, diving boards, and a lifeguard was on duty at the deep end.

The summer days at Toccoa also were filled with playing basketball and tennis, riding bicycles up and down the college roads and running around with the kids of professors who also lived on campus.

“It is one of my fondest childhood memories,” Edds says of staying with his grandparents, Fred and Audrey.

“Toccoa’ is the Cherokee word for “beautiful.”

But Edds’ Toccoa memories are divided in two by something that happened Nov. 6, 1977. About 1:30 a.m. that Sunday, the earthen Kelly Barnes Dam failed, sending water from the 55-acre lake behind it racing downhill toward the college.

The water was said to be traveling at 120 mph, and though it was roaring like a freight train, many of the people in homes, dormitories and a trailer park in its path were sleeping and not able to evacuate in time.

In all, 39 people were killed.

A fatality list paints the grimmest of pictures. Karen Anderson, a 29-year-old married student and her children, Becky and Joey, died in the onrush of water, debris and mud. There was Ruth Moore, a 24-year-old secretary of the college alumni association and her infant son, Jeremiah.

Volunteer fireman Bill Ehrensberger, his wife, Peggy, and their three children were gone.

Mary Williams, 75, had been on the college staff for 35 years. Theology professor Edward Pepsny died in the waters along with his wife and two children. Mary Jo Ginter, 26, was lost, along with her four children, Nancy, Brenda, Rhonda and Tracy.

There were many more.

“Just a few students died,” Edds says. “Most were professors and administrators and their families. My grandfather was friends with all of them and we knew all of them from being on campus so much.”

Five other houses and five more college buildings had significant damage. The town of Toccoa’s water-supply pipe also was crushed, and the city’s water was contaminated for several days.

First Lady Rosalynn Carter made a visit to Toccoa not long after the tragedy to offer her support. She would write in memoirs later that what she found instead was hope, courage and love.

A federal investigation, made at Ga. Gov. George Busbee’s request, was released before the end of 1977, and it could not point to one specific cause for the earthen dam’s failure.

The report said, “The most probable causes are a local slide on the deep downstream slope probably associated with piping, an attendant localized breach in the crest followed by progressive erosion, saturation of the downstream embankment, and subsequently a total collapse of the structure.”

In other words — disaster.

The Kelly Barns Dam was about 400 feet long, 20 feet wide at its crest and 42 feet high at its maximum section. It started out as a rock crib dam, completed in 1899. In 1937, the then Toccoa Falls Bible Institute looked for a more reliable power source, so it built the earthen dam over the rock crib dam.

Until 1957, the dam served as a power source for the Bible Institute, which later became Toccoa Falls College. Though the power wasn’t needed any longer, the dam provided a nice recreational lake.

Torrential rain had been falling in Stephens County, Ga., before the dam broke that November morning, and four volunteer firemen, including Ehrensberger and David Fledderjohann, who also would die in the flood, started knocking on doors of the trailer park sometime after midnight warning of the rising waters of Toccoa Creek.

It was reported the water was 30 feet high heading toward the town after the dam broke.

You might be wondering where Fred and Audrey Hansen, Edds’ grandparents, were the morning of Nov. 6, 1977. The couple had left their college home the night before the dam broke to travel out of state.

“They called him to alert him of the disaster,” says Edds, who was 14 at the time, “and he rushed back to campus to begin assisting in the cleanup.”

Before becoming vice president at Toccoa Falls College, Fred Hansen had used his engineering background to work for a company in central Florida that built steel bridges for the military.

“The experience he had dealing with government contracting became critical to the college as state and federal assistance poured in and the college was being rebuilt,” Edds says.

Fred Hansen spent the next several years bringing the campus back from the tragedy.

The college named a road after him: Hansen Drive. And Edds gave the eulogy at his grandfather’s funeral. Fred and Audrey Hansen lie at rest in Toccoa’s city cemetery. When Edds’ mother, who lived in Florida, died three years ago, she also was buried in Toccoa.

She wanted to be with her parents, Edds says.

It was two years after the 1977 flood before Edds returned to Toccoa.

“There was so much repair work and rebuilding going on during that time that everyone felt it was best if we stayed in Florida,” Edds says.

So for the folks going on the excursion train to Toccoa Oct. 30, do these things: Enjoy the leaves. Have fun at the harvest festival. Take in the beauty of Toccoa Falls. Remember 39 lost souls.

And think of a boy and his summers — before the great flood.