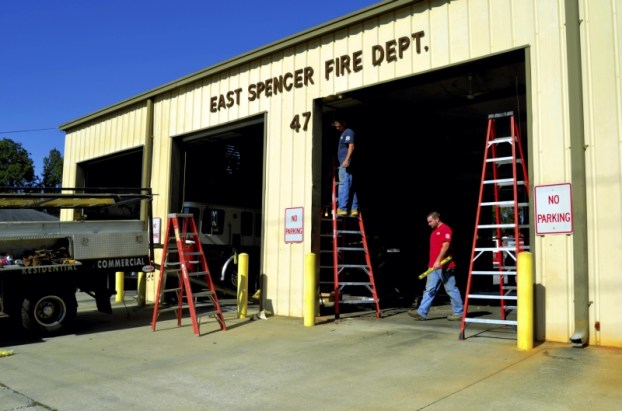 Russell Johnson, left, and Jeremy Chase, both of Perry's Overhead Doors cut into the wall and overhead at the East Spencer Fire station. The work also included hanging a new automatic garage door. The repairs are being done to make room so that a future truck will fit into the station. The first door was widened a few years ago and another door will be widened in the next budget year. Shavonne Walker/Salisbury Post Russell Johnson, left, and Jeremy Chase, both of Perry’s Overhead Doors hang a new automatic garage door at the East Spencer fire station. The repairs are being done to make room so that a future truck will fit into the station. Shavonne Walker/Salisbury Post

EAST SPENCER — In minutes, a crew from Perry’s Overhead Doors had cut into a side wall at the East Spencer Fire station, and in less than 20 minutes the crew installed a new, larger automatic garage door.

The changes, which cost an estimated $2,800 to make, are just a few of the improvements the department is making at the station and its nearby annex. East Spencer fire officials have been quick to point out they really need a new station, but making repairs to the one they have will have to do for now.

The repairs were part of a request at the town board’s planning retreat earlier this year. Marshall Moore, interim fire chief at the time, said there were several vehicles that needed to be replaced. Part of replacing dated vehicles would include widening the current door frame to accept larger trucks.

The fire station has three garage bay doors, one of which had already been widened a few years ago. The cost of a second door will be covered in a future budget. The town budgeted the project, which included cutting the side walls and overhead frame to take the side walls from 10 feet to 12 feet wide.

The project also included the installation of a garage door and power opener that will be operational from inside the fire truck.

“Revenues will determine when the second door will be repaired,” said Fire Chief Josh Smith.

Smith said it could be a possibility after July 1 in the upcoming budget year. He said the department does not currently have a new truck in hand.

The fire station office, bathrooms, walls and floors will need repairs and coats of paint. The work at the annex, located behind the local post office and just yards from the fire station, also includes painting. Smith said it’s likely that all of the painting will happen in November.