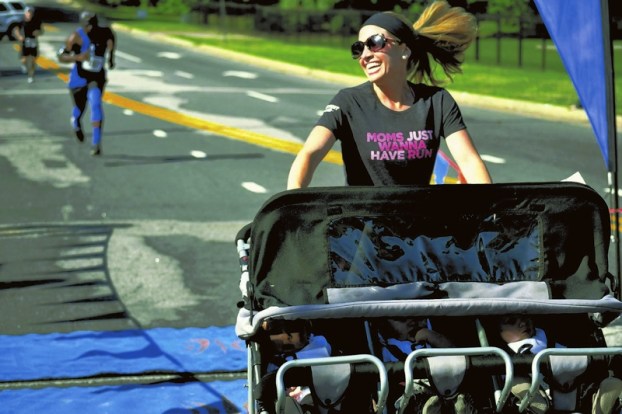 Suzy Holt Goodwin, a 1999 East Rowan High graduate, competes in an earlier race this year with her now 1-year-old triplets. Goodwin plans to push the triplets in the N.C. Halloween Half Marathon Oct. 30 in Fayetteville and set a Guinness World Record in the process. Submitted photo

Three’s company: Mother will push 1-year-old triplets in half marathon

Several years ago, as part of her training for the cross country team at East Rowan High School, Suzy Holt Goodwin crisscrossed the trails at Dan Nicholas Park or she and friends might run along Sides Road and head for the Hardees in Rockwell.

At Hardees, they would grab an ice cream cone before running their return route. A health and wellness professional today, Goodwin laughs but understands how she made ice cream her reward system.

Goodwin, 35, will be running for a different kind of reward Oct. 30 when she competes in the N.C. Halloween Half Marathon in Fayetteville and attempts to establish a Guinness World Record.

She will be the first person trying to complete a half marathon by pushing a triple stroller. Riding in the stroller will be her 1-year-old triplets: Gideon, Gabriel and Charlotte.

Goodwin is a veteran runner, having competed in scores of marathons and races. She has a personal goal of running a marathon (26.2 miles) in each of the 50 states, and she already has accomplished that in 42.

She also participates in demanding CrossFit training, and she had been lifting weights two to three times a week.

But with this half marathon, Goodwin is facing an arduous task.

Goodwin stands 5 feet, 3 inches tall and weighs 115 pounds. The triple stroller weighs 45 pounds by itself, and her triplets’ total weight together is 70 to 75 additional pounds. The downtown Fayetteville course looming ahead of her — it will include the Cape Fear River Trail — is pretty hilly.

“Getting the stroller up the hills will be the challenge for me,” Goodwin says. “… It is a little crazy.”

No one has attempted to run this far pushing a triple stroller, and Guinness officials have decided they will accept an application for a documented world record for anyone going 13.1 miles (a half marathon’s distance) or more.

“The good news is I’m setting this record — I’m not trying to break a record,” Goodwin says.

She has a chance.

In May, Goodwin pushed her three-and-a-half-foot-wide stroller to victory in a local 5-kilometer run in Fayetteville. She was the top female finisher, even with the stroller.

If Goodwin has any strategy for the race, it is to carry with her plenty of Cheerios, Goldfish and light plastic toys to keep Gideon, Gabriel and Charlotte occupied. She also plans to haul diapers.

If one of the infants becomes sick and can’t be part of the race, Goodwin says her Plan B is substituting in the triplets’ older brother, Christian, who will turn 3 later this month. Christian is a veteran when it comes to strollers and his mom’s running.

She also competed in indoor and outdoor track, usually running 0ne- and two-mile events and sometimes being asked to man a relay leg on distance races. She graduated from East Rowan High in 1999.

Goodwin met her husband, Trey, who grew up in Oxford, at the University of North Carolina at Greensboro. He joined the U.S. Army and is now in his 15th year. Trey’s military career took the couple to places such as Washington, D.C., Kentucky, Missouri, Alaska and now back to the state they consider home.

Trey Goodwin is a captain with the 4th Psychological Operations Group at Fort Bragg, but he was in his fourth tour in Afghanistan when Suzy was pregnant with the triplets and already raising young Christian back in Fayetteville.

Suzy was hoping to carry the triplets for at least 35 weeks before delivery, but she had a seizure at the 30-week mark, pushing her into an early labor. Goodwin was lucky. Her mother and a friend were at her home when she had the seizure and made sure she reached the hospital.

At Cape Fear Valley Medical Center, doctors told her the babies looked as though they were coming, though they would try everything they could to stop her labor if possible.

“It was just too early,” Goodwin says.

Meanwhile, the American Red Cross worked with the Army in trying to get Trey home. In the end, he missed the delivery of their triplets by three hours. He made the trip from Afghanistan to Fayetteville in 54 hours.

The triplets were born in August 2015, and for the next two months they were in the neonatal intensive care unit (NICU) at Cape Fear Valley Medical Center. Each of the triplets had different issues to conquer in NICU, so their development benchmarks have had to be adjusted by a couple of months.

Charlotte is just taking her first steps, while her brothers are still in the crawling stage. To celebrate their one-year anniversary of coming home from NICU, Suzy wanted to mark the occasion by running in the half marathon and using it as a way to raise funds for the NICU and March of Dimes.

“They took great care of our kids,” she says of the doctors, nurses and respiratory therapists.

As for the half marathon, Goodwin says the challenge turned out to be finding a longer-distance race which allowed strollers, and she recalled seeing strollers in the Halloween Half Marathon last year.

To help with her application to the Guinness Book of World Records, Goodwin will have help from the race director, a friend who will provide video documentation at important points along the course.

Goodwin also will line up witnesses verifying she completed the half marathon, and she’s thinking of attaching a GoPro video camera to herself.

Goodwin says her babies have shown different personalities. Charlotte is a leader, maybe even a diva. She’s highly vocal and mischievous, her mother says.

Gabriel is a sensitive fellow, who smiles with his eyes and seems to flirt with women. A trip in the stroller is one of the best ways to calm him down.

Suzy and Trey call Gideon “The Moose” because he eats a lot. Gideon probably had the roughest road in NICU, but he seems to be thriving now. He likes music and shows empathy for his brother and sister.

If one of them is laughing or crying, Gideon does the same.

Trey has been able to stay at Fort Bragg since the babies were born. The family lives off the post and has a lot of family support, Trey’s mother, has moved to Fayetteville from New Hampshire.

Suzy’s parents are close by in Concord. A friend from her running club took care of Christian for a couple of days when the triplets were first born, and Suzy says she has “a great tribe” of family and non-family members who have provided a lot of help.

If taking care of four young children and training for a half marathon weren’t enough, Goodwin works from her home, doing health promotions for SilverSneakers, a program linking seniors and their health plans to gyms and fitness centers.

Looking back, Goodwin thinks her own love for fitness began with running in middle school and high school and just wanting to be part of a team.

When the Halloween Half Marathon comes, she will feel as though she’s competing for a team again —  the people at March of Dimes and the neonatal intensive care unit at Cape Fear Valley.

“I’m definitely going to go out there and give it all I can,” Goodwin says.

To make a donation to the Cape Fear Valley Medical Center Foundation in connection to Goodwin’s run, go to https://donate.cfvfoundation.org/sslpage.aspx?pid=298. In the drop-down designation box, go “Suzy Goodwin — Running for a Cause.”

Zoning still at heart of case for, against proposed SECU site in Granite Quarry

By Mark Wineka mark.wineka@salisburypost.com GRANITE QUARRY — There were plenty of arguments made Monday against a rezoning of roughly 30... read more