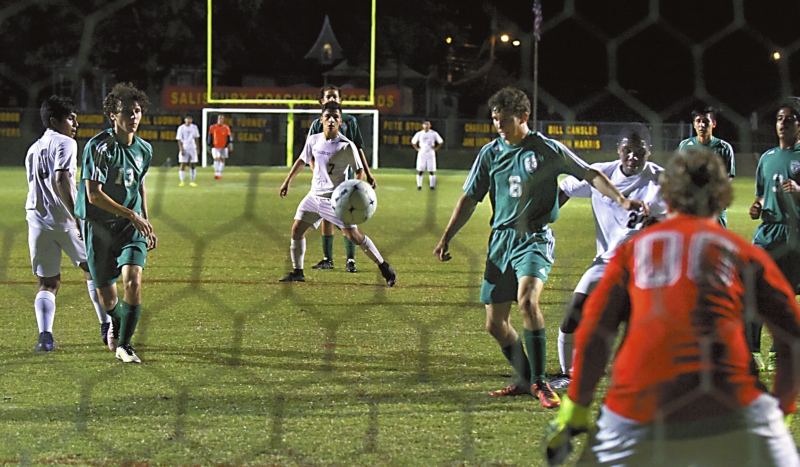 SALISBURY — There were 13 reasons for the Salisbury boys soccer team to celebrate on Wednesday — one for each of the conference championships the Hornets have captured since 2004.

Two nights after suffering its first CCC loss in four seasons, the defending 2A state champion earned another league title with a 2-0 victory against visiting West Davidson.

“Outside of winning the three state championship games, this is the proudest I’ve been of any team,” longtime coach Matt Parrish said. “When you graduate eight starters and 11 kids — and still have your name written at the top of the ledger — that’s a big deal. I told them this game was important. This game meant something.”

Especially considering the new playoff format places an emphasis on winning percentage. Salisbury (13-3-4, 6-1-1) will go in as a top seed, but anything can happen.

“It was kind of a do-or-die situation,” said junior forward Melvin Bonilla. “Thomasville and Lexington made things hard for us, but we pulled through like we always do. The loss to Thomasville (1-0 on Monday) complicated the whole thing.”

So did an ankle injury to leading scorer Andrew Kalogeromitros (18 goals, 8 assists), who missed his first match of the year but is expected back for the post-season. Salisbury received goals from Bonilla in the first half and sophomore Brandon Ibanez in the waning moments to fend off West (3-13-1, 1-6). Defenders Pedro Cruz and Luke Holland played China Wall defense in the midfield and keeper Jack Fisher made six saves to record the Hornets’ seventh shutout.

“I’m proud of the way my kids played,” West Davidson coach Joe Patterson, who’s team edged Lexington 3-2 in overtime on Monday. “I saw some of that same effort in the second half tonight. But give Salisbury the credit. They won. They were able to take care of some counters and made plays.”

Salisbury spent much of the first half playing kick-and-run and trying to connect the dots. It finally succeeded with 10:16 remaining in the half when Rodje Ross slid a doorstep pass to Bonilla, who buried a shot behind West keeper Sebastian Horn.

“I was making a run and he just put it on my plate,” Bonilla said. “Right at my feet. All I had to do was finish.”

Parrish, who’d been fretting since the end of Monday’s loss, was the first to let out a cheer.

“That’s what we were trying to get the kids to do the whole time,” he said. “We had two moments of Salisbury soccer in the first half. That was the first one — six passes, all at the feet, which resulted in the Bonilla goal. The second one was five passes, all at the feet, and the keeper had to come out and make a diving save. That’s how we have to play to be successful.”

The pulse of the match nearly changed when West Davidson had a goal disallowed midway through the second half. A long throw-in from the left sideline bounced past Fisher and into the net, but the play was nullified by the referee’s ruling.

“The trajectory kind of changed,” Patterson observed. “So it had to hit something. We thought it might have gone in off one of their guys.”

Instead it was waved off, igniting Salisbury’s energetic finishing kick. The Hornets launched five shots-at-goal in the last 10 minutes and connected when Ibanez scored and insurance goal with 5:05 to play. The play unfolded when Santiago Cabellero — on of six SHS seniors recognized at halftime — air-mailed a 50-yard centering pass toward the WD goal. Ibanez, with his back to the cage, headed a soft shot over his shoulder and past Horn. Ibanez called it a set play that has worked “plenty of times.”

Parrish had a different take. “It was a good goal,” he said. “Put it there, make it dangerous. That time it worked.”

Next up for Salisbury is a non-conference match at Ledford tonight, then a short layoff before the state playoffs open Nov. 5.

“We had to win tonight,” said Cabellero. “That was our mindset. Now we’ve got to keep it up to get where we want to go.”