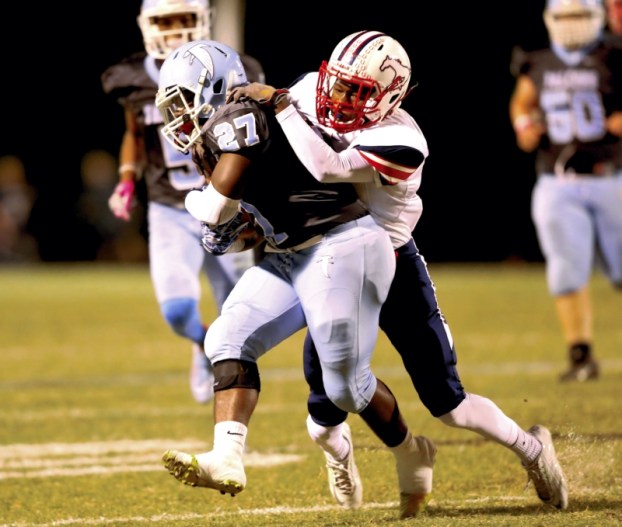 James Sipes / for the Salisbury Post ... West Rowan’s Martavio Rankin (27) picked up 30 yards before East Rowan’s Kenderreck Patterson (17) brings him down during last Friday’s game, a win for the Falcons.

Prep football notebook for Week 9 …
North Rowan defensive end Zion DeBose politely announced via Twitter on Sunday that he was withdrawing from his verbal commitment to Appalachian State.
He thanked the Mountaineers for recruiting him and said he was not ruling out Boone as his future destination, but he was now receptive to recruitment by other schools.
DeBose, who is 6-foot-3 and 230 pounds, is considered by many to be one of the top prospects in North Carolina. He is rated as a three-star prospect on a scale of five.
One recruiting service ranks him as the second-best prospect among North Carolina defensive ends in the class of 2017. They also rank him 35th in the South and 89th in the country.
DeBose’s de-commitment to Appalachian State was triggered by an offer from Missouri — his first SEC offer.
DeBose also has offers from Purdue, Kansas, North Carolina, N.C. State, Duke, East Carolina, Charlotte, Cincinnati and Western Michigan, and the list may be even longer. There’s no doubt more offers will be forthcoming now that he is uncommitted.
DeBose usually dominates CCC competition, and he registered his 11th sack of the season on Friday when North Rowan (6-2, 2-0) demolished West Davidson, 42-0. He has 21 tackles for loss.
•••
Dalynn Cuthbertson, normally a defensive back, helped out on offense due to injuries and scored his first touchdown of the season Friday on a pass reception.
Cuthbertson said his father didn’t get a chance to see him play very often because he lives in Ohio. His father is Mario Sturdivant, one of the all-time great quarterbacks at North and in the county.
•••
Darren Williams, the defensive end across from DeBose, had two sacks against the Green Dragons. Linebacker Victor Lyles was in on 10 tackles. Defensive tackle Matthew Hoosier had two tackles for loss.
•••
Safety Chris Clodfelter picked off a West Davidson pass at his 25-yard line and had visions of his second pick-six of the season.
Clodfelter weaved his way to the West Davidson 10 before losing a fumble, so there were two turnovers on the same play.
“I was switching hands and a guy punched the ball out,” Clodfelter said.
It was Clodfelter’s third interception of the season.

Salisbury
It’s always nice to win on homecoming, and Hornet fans were elated with Friday’s 20-10 CCC win against Lexington.
•••
Most of halfback Cameron Horne’s athletic success prior to Friday’s 128 rushing yards has come in track and field. He placed third in the 110 and 300 hurdles in last spring’s county championships.
“It’s not like I hurdle a lot of guys, but track really helps me with football as far as endurance and as far as discipline,” Horne said. “Everyone looks at track and thinks it’s easy, but I work at least as hard in track as I do in football.”
•••
Halfback Trell Baker had 14 carries for 79 yards against Lexington, matching his season high. He also had 79 against Surry Central.
“Everyone thinks of Baker as a speed guy who wants to get into space, but he also runs the ball hard,” Salisbury coach Ryan Crowder said. “He had a very good game against Lexington — running and blocking. And a lot of our success depends on how hard guys play when they don’t have the ball.”
•••
Last season, Jaylen McDowell was a safety.
Now he’s a tight end/defensive lineman. He did some good blocking for the Hornets on Friday.
•••
Cordarius Montgomery had a big interception for the Hornets (2-6, 1-1 CCC) on Friday.
•••
Nick Austin only had two carries against Lexington, but he got his fourth touchdown of the season.
•••
Lexington scored a touchdown with about five minutes left to cut Salisbury’s 20-3 lead to 20-10.
“I think we could’ve stopped them on that drive if we’d taken a timeout, but we were up three scores, it was taking them a long time to score, and we just wanted the clock to keep running,” Crowder said. “If they’d gone out of bounds, we would’ve taken a timeout, but as long as the clock was moving we weren’t going to stop it.”

West Rowan
In a 49-20 win against East Rowan, West had 204 rushing yards and 263 passing yards. That’s the first time this season that a Rowan team has managed 200-plus yards in both categories.
The Falcons strive for balance, and they’re achieving that goal.
•••
West (7-1, 6-0) has won six straight games and has duplicated the streak that it had last season when it surged from 1-1 to 7-1. Concord ended the winning streak at six last season. West hopes for a different result at Concord this Friday.
•••
Jovon Quarles enjoyed his sixth consecutive 100-yard rushing game on Friday and boosted his season total to 988 rushing yards.
That’s the longest streak of 100-yard games for a Falcon since Dinkin Miller had 14 in a row in 2011.
•••
In his six starts at quarterback, sophomore Payne Stolsworth has thrown 13 touchdown passes and one interception.
•••
Right tackle Avery Allen, a tight end last season, had a big night for the Falcons, paving the way for Quarles and Martavio Rankin to rack up five rushing TDs.
Rankin’s previous season high was 36 yards, but he had 122 against East.
•••
Former Falcon Bryant Young has thrown touchdown passes for Statesville in each of the past two weeks.
•••
Kortez Weeks continued his assault on the record books with six catches for 135 yards and two TDs. Weeks is now fourth on the county’s all-time reception list with 140. He’s likely to pass North Rowan’s Dre Byrd, who had 142, for third place on Friday.

South Rowan
Running back Sayquan Anthony does a lot for the Raiders (1-7, 1-5 SPC). In Friday’s 53-15 loss to Central Cabarrus, he had a 51-yard run for South’s most explosive play and he also blocked a kick.
•••
Receiver Daevonne Harris found the end zone twice for the Raiders. He caught a two-point conversion pass from Brett Amburn and a touchdown pass from Austin Chrismon.
•••
Chrismon had his most efficient passing game of the season, 8-for-13 with two touchdowns and no interceptions.
•••
Koby Campbell had an unusual outing, putting points on the board with a PAT kick and a TD reception.
•••
Mark Austin is mostly a blocker, but he reached 100 rushing yards for the season at Central.
•••
South hosts Hickory Ridge on Friday. Daniel Yow was an assistant at Hickory Ridge before coming to South.

East Rowan
In a 49-20 loss to West Rowan, bright spots for the Mustangs were quarterback Tate Houpe and receiver/DB Steven Hardin.
Hardin more than doubled his receiving stats for the season with 10 catches for 117 yards and a TD. He also blocked the punt that Max Wall recovered for a touchdown.
Houpe was on the throwing end of Hardin’s big receiving night. He was 21-for-29 for 226 yards, with TD passes to Hardin and Franklin Downing.
Houpe had a career high for completions. It was the second-biggest yardage game of his career. He had 260 passing yards in last season’s opener against North Rowan.

Carson
Not much has gone right lately for the Cougars (3-5, 2-4 SPC), who have lost four straight. That’s the longest skid in Joe Pinyan’s four years at the helm.
They do have a chance to right the ship this week at Northwest Cabarrus. That’s a team Carson has mauled the last two seasons.
•••
Carson has been out-rushed by almost 500 yards and has been out-passed by a little more than 500, so the stat sheet tells part of the story.
•••
Safety Andrew Jerman has been used more on offense lately. He’s had a rushing TD and a receiving TD in the past two weeks.
•••
Isaac Bell had another two-point conversion catch in the 35-8 loss to Concord. That makes eight in the last two seasons.

Davie
Jared Griggs kicked two more field goals in the 45-42 win against North Davidson.
That gave Griggs 10 for the year, the most by a Davie kicker since Michael Rowe had 10 in 2007.
•••
Davie (8-1, 4-0 CPC) finally cracked the AP top 10 poll, coming in at 10th.
•••
Davie linebacker James Boyle soloed or assisted on 47 tackles in Davie’s first three CPC wins against R.J. Reynolds, Reagan and West Forsyth and has more than 100 tackles for the season.
•••
Davie is off this week and will heal some injuries for its final push. The War Eagles will wrap up the regular season with CPC games against two more winning teams — Mount Tabor and Parkland.

A.L. Brown
A 21-7 loss to Cornelius Hough threw the Wonders (6-2, 2-1) into a dogfight in the MECKA with Mallard Creek, Hough and Vance.
All four have one loss. Brown beat Vance. Vance beat Mallard Creek. Mallard Creek beat Hough.
•••
Josh Endicott was a promising athlete at A.L. Brown a few years ago and was on the varsity football, basketball and baseball squads as a freshman.
Endicott’s family moved in the fall of 2014, early in Endicott’s sophomore year, and Endicott is now at Upperman High in Baxter, Tenn.
Endicott, who is 6-foot-8, committed recently to the University of Cincinnati as a baseball pitcher.