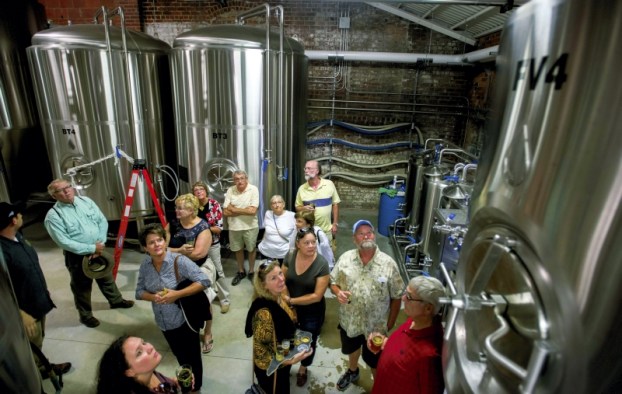 The 2016 Rowan County Chamber of Commerce Farm Tour held Tuesday focused on new breweries and barley production in the county. One of the day’s activities was a tour of the brew house at New Sarum Brewing Company. Jon C. Lakey/Salisbury Post Aaron Goss, from Carolina Malt House, and his business partner Steve Bauk (off camera) gave a presentation at the Piedmont Research Station about their new malt production plant. Goss said Carolina Malt will be the largest malting facility in North Carolina and will be able to supply a significant percentage of state’s malt using barley from local farmers. Jon C. Lakey/Salisbury Post

SALISBURY — Farmers, business owners and other members of the public got to learn more about barley production and microbreweries during this year’s Farm Tour.

“It’s more of an opportunity for business leaders, farmers and the public to visit local agricultural facilities in Rowan County,” she said.

Elaine Spalding, chamber president, said the point of the event was to show people the vibrant agricultural industry in the county.

The committee decided to focus this year’s tour on barley production and microbreweries because of the openings of New Sarum and the Morgan Ridge Railwalk & Brewery, as well as the soon-to-be-open Carolina Malt.

Aaron Goss and Steve Bauk from Carolina Malt met the group at the Piedmont Research Station and gave a presentation about the history of barley and beer, as well as the malting process.

Goss showed a timeline of beer drinking that showed that fermented beverages were made in China as far back as 7,000 B.C.

“We know with some certainty that humans have been enjoying beer for 9,000 years,” Goss said.

There was even a Sumerian goddess of beer named Ninkasi that had a hymn dedicated to her that included descriptions of the brewing process.

Goss said that while hops began to be added to beer about 1,200 years ago, malt has always been a key component.

“Malt is really the defining factor of beer,” he said.

Breweries usually do not do their own malting, so it ends up being imported from facilities thousands of miles away.

Goss said Carolina Malt will be the largest malting facility in North Carolina and will be able to supply a significant percentage of state’s malt using barley from local farmers.

“All of our barley came from within 30 miles of our facility,” Goss said.

Goss talked about the malting process, which involves steeping, germination and kilning, with an option of roasting for different flavors.

At the end of the presentation, attendees asked questions about when they expect Carolina Malt to be in production, how many employees they expect to employ, the shelf-life of the malt and the ability to create custom malts.

Goss said they hope to be in production by the end of the year. Probably around 12 employees will be working there at the start, with 10 or 20 more being added on as production increases.

Malt hits its peak freshness at 30 days, but Goss said it has a shelf life of two years. And because they will be able to control each step of the malting process, customization is possible.

Afterwards, the group was taken out into the fields of the Piedmont Research Station to hear from Dr. Paul Murphy, a plant breeder and, more specifically, a small grains breeder.

Albertson said many don’t know what the research station does, and the tour is a good way to let the public get a glimpse of the research.

“We feel like the research station is the secret of Rowan County,” she said.

Joe Hampton, director of the station, said the goal at the facility is to figure out a way to increase production efficiency on farms to keep up with the world’s growing population, which is predicted to increase by about 2 billion people by the year 2050.

“Somebody’s got to feed them. Hungry people are mean people,” he said.

Murphy explained how the farmers and researchers are working to develop new varieties of wheat and oats, as well as changing the breeding process to increase efficiency.

He said between 35,000 and 50,000 different experimental varieties are planted each year.

The group moved on to Morgan Ridge Railwalk Brewery & Eatery for a lunch, tour and tastings, and then visited New Sarum Brewery for another tour, tasting and mini farmers market.

During lunch at Morgan Ridge, Sen. Tom McInnes, who is also on the agricultural business committee for the state, talked to the group about how innovative Rowan County farmers are and how other areas could follow in their footsteps, according to Spalding.

Albertson said the committee is thinking about exploring cheese for next year’s tour. Previous tours explored the county’s dairy and wine industry. In the future, there may be an art and agriculture tour.

Spalding said the tour group was able to learn about the economic impact of agricultural business in the county.

“It’s just been a really good, productive day,” she said.

The chamber will hold its Farmers Appreciation breakfast in March during the Power in Partnership breakfast series.

Three’s company: Mother will push 1-year-old triplets in half marathon

Several years ago, as part of her training for the cross country team at East Rowan High School, Suzy Holt Goodwin crisscrossed the trails at Dan... read more