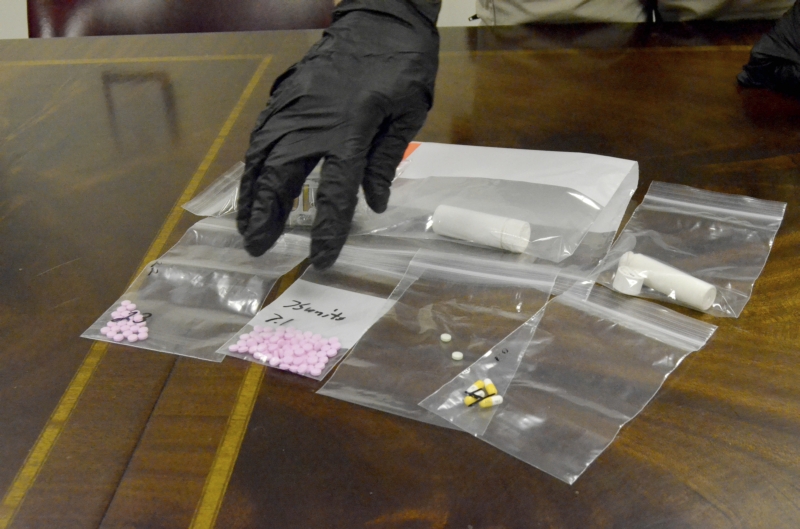 Rowan investigators say these were the pills and plastic tube that were found during a cavity search of Granite Quarry resident Jamie Agee. She was charged with trafficking along with child abuse offenses after her daughter was found to be holding pills and nearly $600 in cash. Shavonne Walker/Salisbury Post

SALISBURY — A woman faces felony drug trafficking charges today after she was found with a number of pills, some of which were discovered during a cavity search. Rowan authorities say her 10-year-old daughter had been given some pills and nearly $600 in cash to hold.

The Rowan County Sheriff’s Office charged Jamie Dawn Agee, 31, of the 600 block of South Salisbury Avenue in Granite Quarry, with felony sell/deliver schedule II (opana), possession with intent to sell/deliver opana from an undercover transaction, trafficking opium by transportation and possession, contributing to the delinquency of a minor, misdemeanor child abuse and misdemeanor possession of drug paraphernalia. Authorities say she bought some pills from an undercover officer on April 20.

Investigators arrested Agee during a traffic stop Monday around 2 p.m. on Julian Road. She was the back seat passenger. During a search, they found 75 10-milligram tablets of oxycodone in a small tube concealed inside Agee’s body. Her daughter had another tube that contained 20 tablets of 10-milligram oxycodone and was holding $587 in cash.

Agee remains in the Rowan County Detention Center under a $100,000 secured bond. She was  convicted of misdemeanor larceny on Jan. 14 and was on supervised probation for 12 months. Agee also has a pending probation violation charge.

Her daughter has been placed in the custody of the Rowan County Department of Social Services.