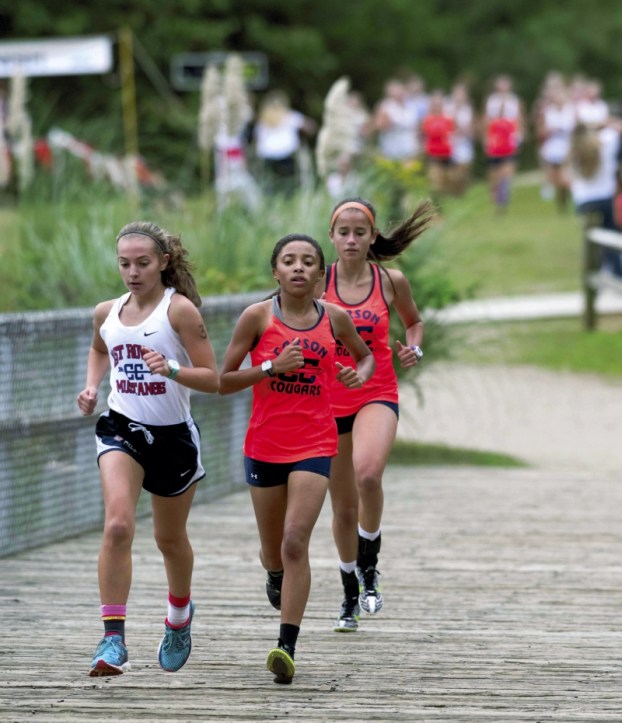 SALISBURY — There are a lot of championship banners in the West Rowan gym, but the only two for boys cross country are from the 1990s.
Now they’ll add a third. The Falcons dominated the South Piedmont Conference Championships at Salisbury Community Park on Tuesday, putting six runners in the top 12, including runner-up Andrew Burgess.
West has been stout all season, but there was still some nervousness for coach Scott Foster when all 10 league teams convened in one place.
“We’ve only had one bad race all year (Statesville Invitational), but you can always have a bad day, and we knew some of the Cabarrus teams were strong,” Foster said. “But the guys did what they needed to do. We beat a lot of good programs.”
West also got high finishes from Nathan Zauner (5th), Thomas Waldo (9th), Cade Harrill (10th) and Cameron Butler (11th) on its way to a 37 score, 42 points better than second-place Northwest Cabarrus. Oscar Bautista (12th) didn’t figure in West’s team score, but he finished ahead of a lot of people and he joined five teammates on the All-South Piedmont Conference team.
Cox Mill’s Jack Trabucco, a sophomore, was the individual boys champion. He ran 17:07.89 to finish almost 10 seconds in front of Burgess, a junior.
“This was a hillier course than the flatter courses we’re used to running on at Dan Nicholas Park or Frank Liske Park,” Cox Mill coach Justin Kuralt said. “Jack has run a best of 16:23 (at McAlpine in the Wendy’s Invitational) and he could make the state meet. On paper, he will make it.”
Trabucco was happy with the win and agreed with his coach that he wasn’t running on a course conducive to a fantastic time.
“Just a lot of hills and I was trying not to trip over a root in the woods,” Trabucco said. “It really was a tough course, but I was able to lead all the way.”
Burgess, the Rowan County champion, usually out-kicks the competition, but Trabucco was able to keep him at arm’s length.
“I’m good on the hills and that’s where I gradually made up ground on some of the other top runners like Sean (Incardona) and Ethan (Bemis),” Burgess said. “But I just never could get close enough to Jack to make a move.”
Still, Burgess spearheaded a team triumph. There will be a banner in the gym to remember this special squad, and there’s some satisfaction in that.
“The guys really turned up their mileage all year and they worked very hard for this championship,” Foster said. “I’m proud of ’em all. They did things the right way.”
West will face a big challenge qualifying for the state meet as a team. The Midwest is a difficult region because there are so many strong 3A teams in Union County. Only four teams at the Midwest Regional (Oct. 29) will qualify for the state event (Nov. 5).
•••
Team scores: 1. West Rowan 37, 2. Northwest Cabarrus 79, Cox Mill 80, East Rowan 93, Hickory Ridge 106, Carson 140, Robinson 227, South Rowan 234, Central Cabarrus 251, Concord 253
Other All-SPC runners (top 13): 3. Sean Incardona, East, 4. Ethan Bemis, NWC, 7. Logan Bemis, NWC, 8. Jonah Evans, Carson, 13. Ross Alexander, East.

Girls race
The Taylors are swift.
Carson junior Taylor Wiggins and Carson freshman Taylor Conrad finished 1-2 in the individual race in the South Piedmont Conference Championships held on Tuesday evening at Salisbury Community Park.
Wiggins and Conrad also were 1-2, in the same order, in the Rowan County Championships.
But this was a much more challenging outing — a much hillier course, combined with serious heat. Wiggins broke 20 minutes at the Dan Nicholas Park in the Rowan County Championships in ideal conditions. Under the circumstances, she probably was even better on Tuesday with her 20:25 clocking.
Wiggins is only 5 feet tall, but she’s a good enough athlete that she’s played lots of minutes for Carson’s varsity basketball team the past two seasons.
But it looks like cross country is where she’s really going to make her mark. She came out of nowhere to shine last season in her first year of competition.
Wiggins drew cheers from a big crowd as she emerged as the frontrunner with no one else in sight.
“It’s a very tough course here, and it was a really hot day,” Wiggins said. “I wasn’t leading at the start, but when we got to that second mile I had enough left to speed up and pass the girls ahead of me.”
Conrad may be a freshman, but she’s smart enough to know that if she can stick close to Wiggins, she’s going to be near the front. Conrad finished 42 seconds behind Wiggins but ahead of every one else.
“The weather was the biggest factor today, but I had to keep telling myself that it was a factor for everyone, and I was able to keep pushing through the woods,” Conrad said. “I didn’t want to disappoint anyone today — including myself.”
Conrad will become a familiar name for those who follow Carson athletics. She’s also a good basketball and soccer player.
The Taylors led Carson to a third-place team finish. Jessie Nichols also had a solid run for the Les-Lee Peeler-Cougars and finished 15th.
The team competition came down to a close struggle between Hickory Ridge (50) and Northwest Cabarrus (53).
Hickory Ridge had the fourth, sixth and seventh finishers, while Northwest’s top three placed fifth, eighth and 10th.
South Rowan’s Madison McGuire, a freshman, surprised a lot of people. She placed ninth and was the third-highest Rowan finisher.
•••
Team scores: 1. Hickory Ridge 50, 2. Northwest Cabarrus 53, 3. Carson 76, 4. Central Cabarrus 117, 5. Cox Mill 137, 6. South Rowan 179, 7. East Rowan 191, 8. Concord 192, 9. West Rowan 235, 10. Robinson 245.
Other All-SPC runners (top 13): 3. Jennifer Mohler, Central, 4. Kaitlyn Schmidt, Hickory Ridge, 5. Mikenzly Specht, NWC, 6. Kennedy Poppler, Hickory Ridge, 7. Jordan Cruce, Hickory Ridge, 8. Ashleigh Thomson, NWC, 10. Meghan Rhoney, NWC, 11. Jessie Connick, Cox Mill, 12. Allyson Halbach, Concord, 13. Isabella Saliba, Hickory Ridge.