‘They would help us’: Fourth-graders collect donations for hurricane victims 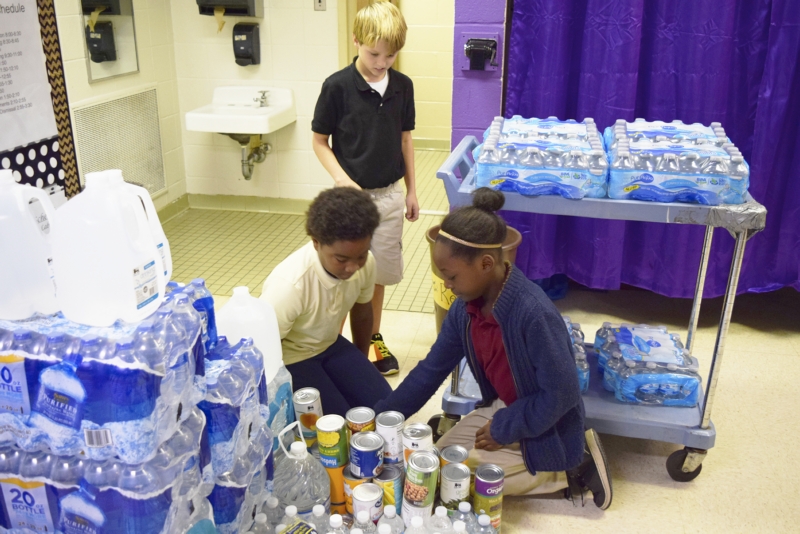 Izairy Ervin, left, Landon Overcash, center, and Nagenoah Williams help make room for a water donation. They, and the rest of their class, have been collecting donations for those affected by Hurricane Matthew for a week. Rebecca Rider/Salisbury Post

SPENCER — It started out as a lesson in current events. Kristina Sheets, a teacher at North Rowan Elementary School, had her fourth graders read up on the effects of Hurricane Matthew. She couldn’t have guessed the impact it would have on them.

As students looked up pictures of flooded streets and houses, of kids their own age or younger wading through high water, and read about the damage, something began to happen.

“I felt bad for them, and I hope that they will be OK,” student Jackelyn Esquivel said.

Sheets said the class often talks about giving and being kind to others. She tells her students that people have two hands — one for helping themselves and one for helping others. And when the class discussed how the wet weather and winds of the hurricane had affected them versus how it affected places like Florida, the students wanted to do something.

Moved by compassion, the class decided to donate supplies.

“They’re the ones that really wanted to go forward with this,” Sheets said.

The class researched areas hit hardest by Matthew and began to think of what to donate.

“We got in groups and researched what the Red Cross really needed,” student Skyla Brown said.

The list was full of necessities like water, canned goods and flashlights. With their research in hand, the class held a vote on what they should collect, and water won out.

Last week, Sheets sent her students home and had them ask their parents for gallon jugs of water, packs of water bottles or canned food. At first, it was just Sheets’ small class of fourth-graders, but she was encouraged to expand the project by another teacher.

“We’ve got to go big,” the teacher told her.

So the class extended an invitation to the rest of the school, and reached out to the community. The students had already built a large pile of water jugs and bottles and cans of food in the corner of the classroom, but Monday morning they got their first outside donation — several shrink-wrapped packs of water bottles.

“We’re hoping by the end of the week it will be a large donation by the community,” Sheets said.

For the students, it’s been a lesson in compassion and thankfulness — Sheets has asked them to think about how they would feel if they came home one day and everything, even their house, was gone.

“I feel like we don’t appreciate what we have now,” student Dasia Elder said, “Because some people don’t have what we have.”

Because of that, she said, it’s important to give to others. After learning about the devastation caused by Hurricane Matthew in Florida and eastern North Carolina, Kristina Sheets’ fourth grade class at North Rowan Elementary stepped up to help. The class collected water and canned goods for a week, and this week has asked the rest of the school and the community to help, as well. Rebecca Rider/Salisbury Post

Student Azarea Miller said that giving when you’re able is important, because one day you may be the one in need.

“If we had a hurricane right now, they would help us,” she said of the Red Cross.

Initially, the supplies were meant to be sent to Florida, but with the flooding crisis in the eastern part of North Carolina, the class may switch tracks.

The class will be accepting donations through Friday, and Sheets said she plans to donate the goods to the Red Cross Friday afternoon or sometime Saturday. She hopes there’s enough that she’ll have to hire a truck.

But mostly, she’s proud of her students.

Other district schools are also reaching out. According to school system Public Information Officer Rita Foil, Rowan County Early College will be helping other early colleges affected by the storm, fifth-graders at Rockwell Elementary are holding a penny drive for Haiti and South Rowan High School is holding a “RoCo for RoCo” drive this week to collect items for flood victims in Robeson County — needs listed include: bottled water, toiletry items, baby items and non-perishable food items.