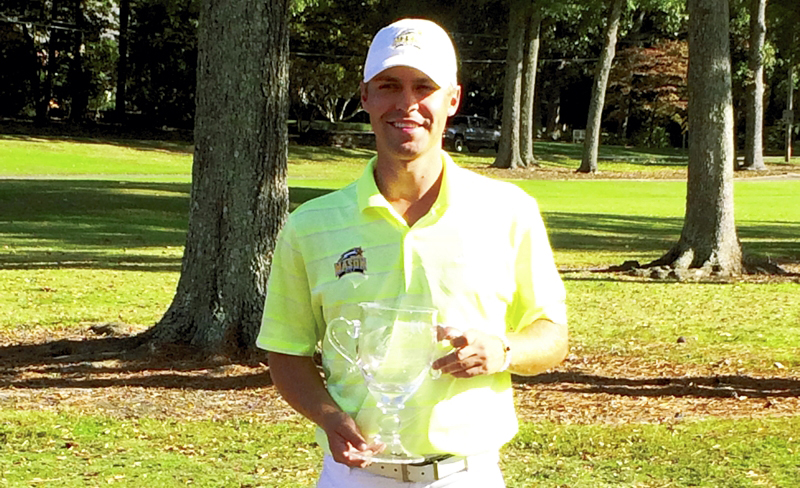 Edwards had the best round of the third and final round on Tuesday, a 3-under par 68 at Alamance Country Club. Edwards’ total of 10-under par 203 was matched by Elon’s Jake Leavitt and North Carolina’s Jose Montano.

The individual victory was Edwards’ first as a collegiate player. Edwards, a junior, qualified for and played in the prestigious U.S. Amateur in August, at Oakland Hills Country Club in Bloomfield Hills, Mich. He had a two-day score of 145, but missed the cut.

At the Phoenix Invitational, Edwards shot a blistering 5-under par 66 in Sunday’s first round, but “slipped” to a 69 on Monday.

Leavitt and Montano were one shot back of Edwards after the first round, but went by him in the second round. Montano shot a 65 on Monday while Leavitt carded a 66. Yesterday, Edwards led the way with a 68, and Leavitt and Montano fell to 70 and 71, respectively. All three golfers ended up 10-under par.

Logan Shuping, an East Rowan High School graduate, played as an individual for East Carolina and tied for 42nd place. Shuping, a freshman, shot 72-71-74, for a 4-over par 217. Shuping actually finished ahead of two of his East Carolina teammates who were involved in the team action.

Shuping was tied with Chance Watson of Appalachian State, Jeremy Wall of Loyola and Cole Patterson of Presbyterian.