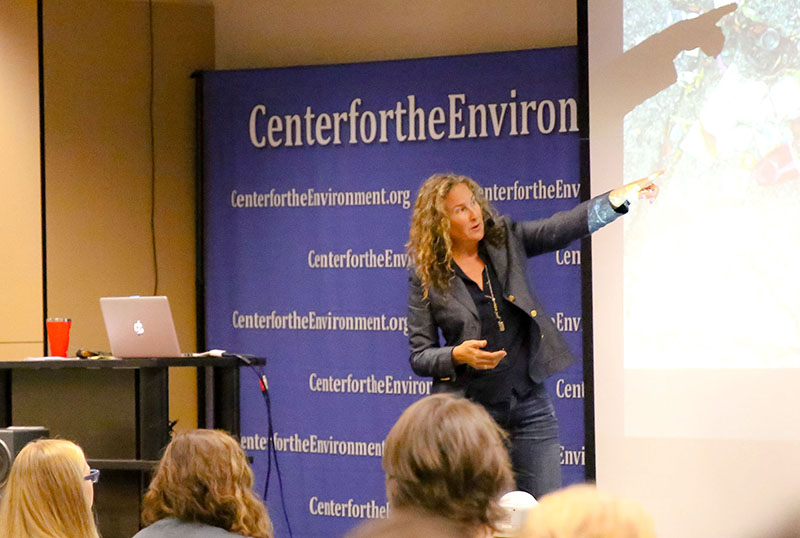 Submitted photo Dianna Cohen shows slides of plastic pollution during her visit to Catawba College's Center for the Environment.

As an artist, Dianna Cohen’s medium of choice is, unconventionally, the plastic bag. Cohen’s inspiration for using plastic bags came from the sense that she was “transforming a material that we think of as waste … and turning it into gold.”

While creating with this medium, she started to learn more about plastic bags and, in turn, about the effects of single-use plastics on the environment. This led Cohen to co-found Plastic Pollution Coalition — a coalition of around 500 different groups whose main focus is plastic pollution clean-up and education.

Cohen spoke at the Center for the Environment at Catawba College on Sept. 29. She told the audience about her origin story from artist to advocate. One of the big turning points in her career, from artist to co-founder, was learning about the Great Pacific Garbage Patch, she said. This garbage patch is located in the Pacific Ocean where a gyre, or naturally occurring vortex in the ocean, has formed.

Cohen described gyres as areas in the ocean that end up having a “toilet bowl effect” for all of the waste that ends up in the ocean. Cohen later learned that there are 11 gyres throughout the entire globe where trash has accumulated and that within these gyres “there is a 6-1 ratio of plastics to plankton.” These alarming facts are what ultimately made Cohen an advocate for change in terms of plastic pollution.

For Cohen, there is no doubt that pollution is a bad thing, but why did she spotlight just plastics? Cohen showed a collection of photos in which both land and sea animals had either been tangled in plastic waste or had mistaken the plastics for food. For example, she showed Chris Jordan’s famous photo of a dead albatross whose corpse reveals a belly full of plastics. “It is not as if these animals are dumb,” Cohen explained to a student after the talk. “They are just trying to figure out their surroundings and fill their bellies.”

So what are some ways that others can start being an advocate for change in the field of plastic waste? Cohen explained that in schools today, students are taught “the 3 R’s: Reduce, Reuse, Recycle,” but at Plastic Pollution Coalition they like to add a fourth R: Refuse single-use plastic.

Some ways that you can do this are by not asking for a straw at a restaurant, bringing reusable bags to the grocery store and even bringing your own cup to a coffee shop. Cohen said that her purse always contains the “essentials” – a steel straw, a set of reusable utensils and a canvas bag.

Cohen believes that the current era is “like the gold rush in the wild, wild West” for companies who are creating sustainable alternatives to plastics. She is especially keen on encouraging students to be the inventors of the future.

The Center for the Environment was founded in 1996 to educate the college community and the public about environmental stewardship and sustainability, provide value-added education for students through interaction with thought leaders and opportunities for experiential learning, and bring diverse people and groups together to catalyze sustainable solutions to our most persistent environmental challenges. For more information, visit www.CenterForTheEnvironment.org.