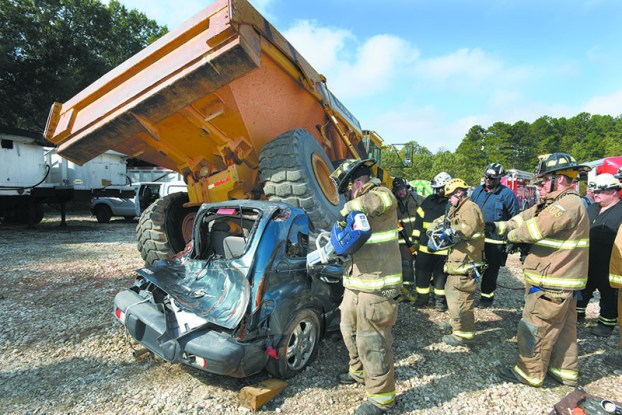 Rowan firefighters and Rescue Squad members use hydraulic lift equipment in lifting this heavy dump truck off a car in a training session. Once the dump truck has been stabilized, cutting tools were used to get the victim out of the vehicle. The Rowan County Rescue Squad had heavy lifting training at Kepley Rigging and Towing. photo by Wayne Hinshaw, for the Salisbury Post

The Rowan County Rescue Squad conducted a heavy lifting  training event at Kepley’s Rigging and Towing for the squad members and the local firefighters.

The training was in four training stations with the rescue members each getting a change at all four stations. One station involved lifting and stabilizing a truck trailer off a car that had a rear-end collision with a tractor-trailer. There was also training in lifting a heavy duty dump truck off a car to free a victim. The heavy duty dump truck could be a highway accident, an off-road accident in a quarry or a construction situation.

In each station, hydraulic lifting equipment was used to do the heavy lifting and wooden timbers were used to stabilize the heavy object off the small car or truck vehicle so that a victim could be extricated from the crash. Metal cutting equipment was also used to cut the door off a car for those who had never used the equipment.

The instructors leading the training were Billy Leach, Jr., “Toot” Lee, and Scott McCaskill. All had special expertise in heavy lifting rescue.

An interesting footnote in the training came when Billy Leach told the members that they could use the car’s seat belts to pull a car from under another vehicle if needed.  Leach assured them that the seat belts were strong enough to pick up the vehicle by lifting with the seat belt.

Workers at Kepley Towing proved the point to be true by picking up a vehicle with their wrecker using the seat belts in the vehicle.

By Shavonne Walker shavonne.walker@salisburypost.com SALISBURY — Deborah Baker had made a promise to her rescue mare, Midnight Sun, that she... read more