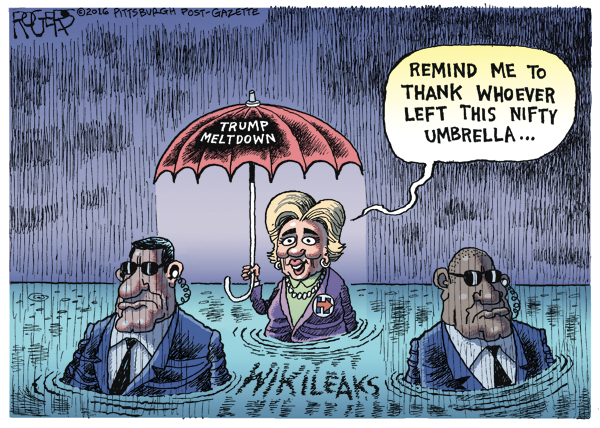 How about a closer look at Hillary Clinton’s record?

I am very upset and offended by your picture in the Sunday paper( Mook’s Place).What explanation do you have that made it necessary for you to publish this?

I don’t see any offensive pictures of Hillary published here. Guess you all have got on the band wagon with all the other news media to put all the offensive smut you can find on Trump in your newspaper.

Well, guess what — it’s not working for the people who live the great United States of America and want her to stay that way. I love America and we have drastically gone downhill in the last eight years under the president that we now have.

I don’t see you publishing any of the things that Hillary has done, lying about Benghazi to the parents of these fine young men, hiding millions of dollars in her foundation so she doesn’t have to pay taxes on it and not using the money for the charities that she claims she did, defending a man accused of raping a 12-year-old and laughing about it, defending her husband regarding the alleged rapes of so many women and then degrading these ladies, her stance on aborting almost full-term babies and then saying she has done so much for the children.

And, as far as what Trump has said in the locker room, you people can say what you want, but all of us, male and female, have at one time or another made degrading remarks about the opposite sex. If you say you haven’t you are lying to yourself.

When it comes right down to it, it’s not about what Trump said but what Hillary is doing. God help us if that woman wins this election. She is the epitome of evil and will follow in Obama’s footsteps to continue to destroy our great nation.

For all the world to see, in the Sunday paper no less, there is a disgusting, salacious, tawdry cartoon by Mark Brincefield depicting Donald Trump with his hands on a woman’s shirt, with this caption: “No, Mr. Trump, you’re supposed to shake their hands.”

This is not funny and I don’t care what your political affiliation is, this is about as low-down as you can get. I would expect something like this from the National Enquirer or Star Magazine but certainly not from a hometown newspaper.

Shame on the cartoonist (get your mind out of the gutter), and double shame on the Salisbury Post for printing it.

Oh, and before I get hate responses, I’m not a Republican!

Ross speaks up for rights

PAC money is pouring into North Carolina’s U.S. Senate race. Deborah Ross ads focus attention on Richard Burr’s devotion to and his benefits from industry lobbyists. Burr ads focus primarily on Ross’ affiliation with the ACLU as making her “too liberal.”

For conservatives, the ACLU is an easy target. Their role is to protect rights of unpopular causes and unpopular people. Constitutional rights apply equally for all; history proves that we as a people do not concede that readily.

Yes, Ross is progressive. I challenge voters to examine her values and learn that they are about fairness, truth and concern for “regular” people. Such values, oddly, are more aligned with the Christian values espoused by, but not necessarily lived by, those who denigrate people like Ross and the ACLU.

You may find yourself in need of an advocate some day; are you comfortable you will always be on the popular side?

Considered in context as opposed to sound bites in attack ads, I believe Ross worked in the ACLU on the right side for all of us “regular” people.

This is from the Charlotte Observer:

“As state director of the American Civil Liberties Union from 1994 to 2002, Deborah Ross:

Hurricane Matthew to the Salisbury area may have had only subtle impacts; however, the area in which my college (UNC Pembroke) resides and the surrounding areas were arguably struck the hardest in eastern North Carolina.

Dam infrastructure deteriorated, causing mass flooding to close major highways and other main roads in the Lumberton and Pembroke areas.

Those who have traveled through these areas know that these areas are extremely impoverished. Many are still left without power and safe drinking water, left stranded, residing in emergency shelters, and have lost their lives, unable to fight the devastation left by Hurricane Matthew.

Emergency shelters are increasing in volume and are in dire need of supplies to adequately aid the community.

Please consider donating goods such as bottled water, non-perishable foods items, toiletries of any kind, diapers, wipes, baby formula/food, and clothes ranging from infant to adult. Help to restore hope and faith in those enduring the worsening conditions occurring in Robeson County. Please contact me if you are interested: hmg005@bravemail.uncp.edu. God bless you all.

I, along with many residents of Rowan County, are very proud of our firefighters. They have stepped up and are assisting a county and a city in dire straights. Our thoughts and prayers go out to them and all of the ones involved.

I know Capt. James Farley and Capt. Chad Moss personally. They are very outstanding young men. I am sure that they jumped at the opportunity to help those in need — a great example of the Golden Rule in effect, while living in such crazy and selfish days. Very, very proud of these men.

Hillary Clinton has said that a baby in the womb — an “unborn person” — has no constitutional protections. No right to life even one minute before birth. So a smutty mouth from 10+ years ago (no chance for change, for grace for redemption?) vs. someone who (during this campaign) believes a baby can be dismembered and thrown away right up until the point of birth if the mother so chooses?

Not a hard choice for me.

A must-see at Lee Street

I just left the Lee Street Theater this night. I saw “Tuesdays With Morrie.” I had read the book and knew what it was about. However, I was totally unprepared to be so moved. Bob Paolino and Ed Whitney delivered phenomenal performances. This is a must see!