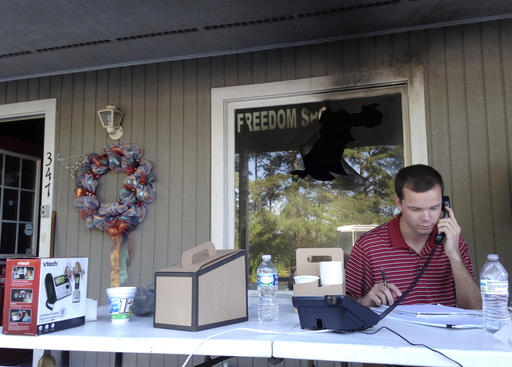 College student Blake Halsey volunteers at the Orange County GOP office.Halsey sits under the window where authorities say someone threw in a flammable device that burned the campaign office. (AP Photo/Jonathan Drew)

Somehow we need to pull the 2016 campaign season back from the brink of anarchy and restore faith in the U.S. election process.

The weekend firebombing of Orange County Republican Party headquarters is another blot on North Carolina’s good name. Americans make the ultimate political expression by casting a ballot, not lobbing a crude bomb into opponents’ headquarters. The assault was accompanied by graffiti saying “Nazi Republicans leave town or else. ”

In Orange County, this act of violence could make Republicans a persecuted minority. Over 70 percent of that county’s voters supported Barack Obama for president in 2008 and 2012. Yet someone tried to violently intimidate the local GOP in terrorist fashion. Instead, the vandal probably fired them up. The perpetrator of this crime must be found and charged.

To their credit, Orange County Democrats stepped up to help Republicans recover from the attack, raising more than $13,000 through a GoFundMe page.

After so much condemnation of Republican Donald Trump’s rhetoric, it’s a twist for this attack to come from the other side, if indeed it did. Maybe we should expect that kind of reaction — and anticipate more of it — since emotions are running so high in the presidential election. Supporters of Trump and Hillary Clinton vilify each other’s candidates in every way possible, and the last weeks of the campaign seems devoted to fear-mongering. Unfounded talk of rigged elections doesn’t help. The more people harbor fear, hate and resentment, the more likely it is that someone will turn dark words into explosive action.

Both Democrats and Republicans can work on calming frayed emotions. The message needs to go out loud, clear and united — no one benefits when people resort to intimidation and violence.