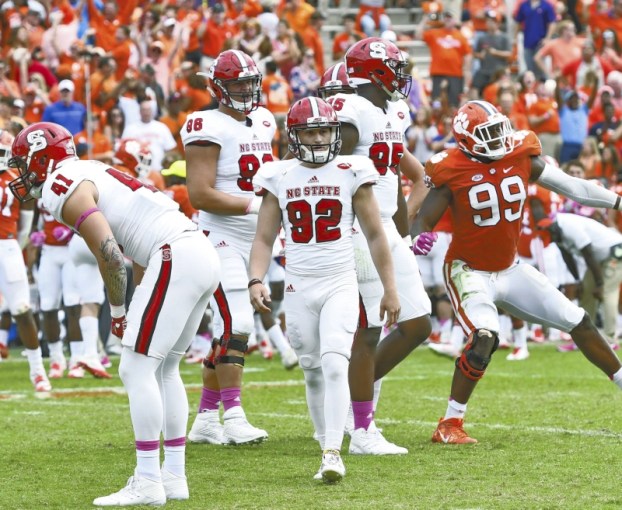 North Carolina State kicker Kyle Bambard (92) walks off of the field after missing a field goal late in the the second half of an NCAA college football game against Clemson, Saturday, Oct. 15, 2016, in Clemson, S.C. Clemson won 24-17 in overtime. (AP Photo/Richard Shiro)

CLEMSON, S.C. (AP) — Dabo Swinney rolled forward out of his crouch, exhaled deeply and slapped the ground. The Clemson coach knew how fortunate the third-ranked Tigers were to escape with their latest victory.

A little luck doesn’t hurt either.

The Tigers (7-0, 4-0 Atlantic Coast Conference) needed all of it to squeak past North Carolina State 24-17 in overtime Saturday.

The Wolfpack (4-2, 1-1) were a 33-yard field goal away at the end of regulation from quashing Clemson’s perfect start. Instead, Kyle Bambard pushed the kick right and sent most of the 82,104 at Death Valley into hysterics.

“I kind of looked up and I saw it started to sail, then I closed my eyes because I couldn’t believe it was actually happening,” Clemson defensive end Christian Wilkins said. “I waited for the crowd to cheer. They messed up because they gave us another chance.”

Given new life, Clemson responded like defending ACC champions. The Tigers converted a fourth-and-1 to keep their overtime the drive going, and then Deshaun Watson connected with Artavis Scott on a go-ahead 10-yard TD pass. Marcus Edmond intercepted Wolfpack quarterback Ryan Finley’s deep thrown into the end zone to keep the Tigers undefeated and on track for the league title game and the College Football Playoff.

It wasn’t the prettiest effort for Clemson, which gave up 397 yards and turned it over four times — including Watson’s first-ever pick six — to the Wolfpack. But it made it two straight heart-stopping home games for the Tigers, who trailed 36-28 to Louisville before rallying with two touchdowns in the final eight minutes to take that showdown victory.

Bambard was 1 for 4 on field-goal attempts.

Stevens started the second-half drama with a 28-yard interception return TD after Clemson came out of the half with a 10-3 lead. The Wolfpack tied things at 17-all on Matt Dayes’ 2-yard scoring run with 11:29 to go.

Clemson took a big hit early on when running back Wayne Gallman came out, looking woozy and out of it as he headed to the locker room. Gallman, the team’s leading rusher, did not return. Running backs coach and co-offensive coordinator Tony Elliott said Gallman’s prognosis is good.

Receiver Hunter Renfrow, who had six catches in his first game since Sept. 10 because of a broken hand, was hurt in the fourth quarter and came out the rest of the way.

North Carolina State: The Wolfpack look like a team on the rise, one of the few the past two season that has been able to take the Tigers down to the wire.

Clemson: The Tigers have been clutch, but can they keep winning with all these turnovers? They are up to 16 on the season. Clemson had 27 (which is a lot) last season and reached the national championship game.

Don’t be surprised to see the Tigers slip a notch or two when the new Top 25 comes out Sunday.

The Tigers are 7-0 for a second straight season and third time since 2011. They’ve also won 21 straight regular-season games dating to 2014 and 20 consecutive home games counting back to a 51-14 Death Valley loss to Florida State in 2013.

Bambard also had a kick hit the upright and another blocked by Wilkins.  The sophomore kicker had missed only one kick this season — and that came in last week’s hurricane conditions against Notre Dame — before coming to Clemson.

“I haven’t seen him yet,” North Carolina State coach Dave Doeren said of Bambard. “But I will. I’ll encourage him.”

North Carolina State: The Wolfpack head to No. 7 Louisville where they are 0-3 all time, including a 30-18 defeat two years ago.

Clemson: The Tigers get the week off before traveling to No. 14 Florida State on Oct. 29. Clemson has won just once (2006) in its past 12 visits to Tallahassee.

College football: Catawba back in the win column