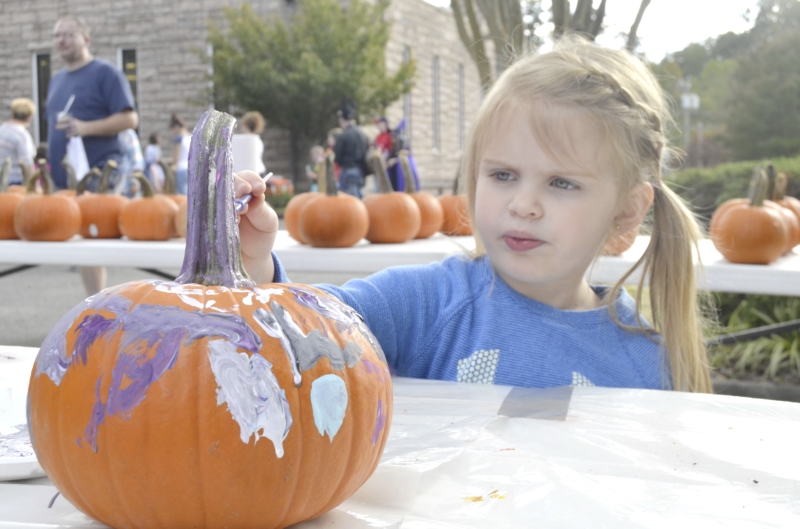 GRANITE QUARRY — Triplets Cooper, Mackenzie and Taylor Draper, 2, sat on a large piece of white paper, each painting colorful streaks on their orange pumpkins. Their aunt Renee Wiles and grandmother Cathy Lyerly helped chorale the trio while the women’s husbands took pictures and went on a search for pink paint for one of the girls.

The women and their husbands brought the children to the Red Cardinal’s Romp and Trunk or Treat fall event at Wittenburg Lutheran Church in Granite Quarry. It was a way to give their parents a break Saturday and enjoy some quality time with the triplets.

Salisbury Attorney Cecil Whitley, who attends the church, along with dozens of church staff and volunteers, have been instrumental each year in making the event a reality. Whitley commissioned local artist Cherrathee Hager to paint 27, 4-foot-tall canvas painted renderings of superhero/heroines and cartoon characters. The paintings were scattered around the church’s parking lot.

The event is part of the church’s outreach program and was started about five years ago, Whitley said.

Whitley gets excited when he sees the smiles and laughter on the children’s faces as they ran around looking at each superhero. He hopes the event grows each year as the word continues to spread.

A photographer was on hand to take pictures of the children posed with the characters and each family will have a copy mailed to them, Whitley explained.

Members of the Catawba College baseball team also volunteered at the event, helping the children with their drawings, pictures and pumpkin painting.

Ashley Heno and her husband brought their two daughters Sophia, 4, and Aubree, 4 months, in custom-made costumes. Sophia was dressed as bat girl and little Aubree was Robin.

“I love it. It’s something the kids can do,” she said.

Nicholas Coats lives a few blocks away and kept seeing the sign at the end of road advertising the event. He almost didn’t stop because he thought his children had to be dressed in costume, but he decided to stop when he saw others without costumes.

He brought sons Aiden, 8, and Madden, 5, who had fun tossing bean bags into painted ghost cutouts.

“It’s pretty cool to have a church that stays involved in the community,” Nicholas said.

It was the first time that Jamie Swan and her husband brought their children and her nieces.

“It’s awesome. It’s good to bring the family together and a way to meet other people,” she said.

Her son Caleb, 3, was dressed as Robin while her nieces Alexys Kelly, 11, and Adyson Kelly, 9, also dressed as superheroines.