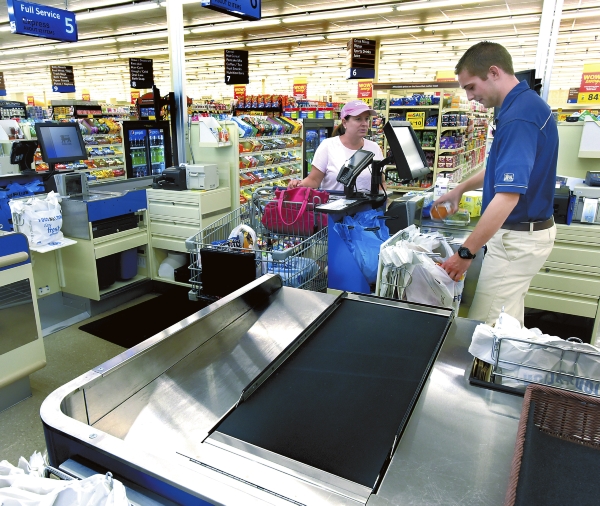 Customer Teen Aron at a checkout counter with cashier Casey Stiller at the Mahaley Ave Food Lion Store that has been completely remodeled. Wayne Hinshaw, for the Salisbury Post

1. In response to the flood devastation spawned by Hurricane Matthew, members of Salisbury and Locke fire departments headed east to help relief efforts in what N.C. county?

2. For 50 years, Leroy Sellers has been a steadfast performer for what Rowan County arts group?

3. The founding of the Hudson-Miller-Tatum VFW Post 3006 in Salisbury dates closest to what historic event?

C. The killing of four Kent State University students in 1970

D. The resignation of President Nixon in 1974

4. This past week, Carson High girls won the school’s first county championship in this particular sport. What was it?

5. This weekend, Livingstone College celebrated the 50th anniversary of what school organization?

A. The Livingstone Teachers Union

B. The Blue Bear Marching Band

6. St. John’s Lutheran in Salisbury was among churches in 100 different cities around the country that joined a live video feed discussing issues such as the election, race and divisions in the United States. What was the name of this program?

A. Listen in, Talk Back

D. One Nation Under God

7. Food Lion recently completed renovations to 142 stores in its greater Charlotte market. How much did the Salisbury-based company invest in these changes?

8. Grace Lutheran Church’s annual fish fry, which helped in raising money for 3-year-old Austin Mowry, who is fighting cancer, included something this year that Austin especially enjoyed. What was it?

9. At the Granite Quarry Civitans Fiddlers Convention, what young performer was named the first winner of the Don & Margaret Livengood Memorial Award for Excellence in Bluegrass Music?

10. Asheville sculptor Robert Winkler has won Best in Show in the 2016 Salisbury Sculpture Show, which has 18 pieces on display in the downtown and on three college campuses. Where is Winkler’s winning piece, which is titled “Moving Along”?

A. Near the Student Union building on the Catawba College campus

B. On the 200 block of South Main Street near the Meroney Theater

C. In the 300 block of East Innes Street near Robertson Gateway Park

D. In the 100 block of North Lee Street near the Visitors’ Center

By Mark Wineka mark.wineka@salisburypost.com SALISBURY — A pair of Community Voters Project workers were fired Tuesday after complaints they were... read more