My Turn, Kim Porter: Dakota pipeline will hurt people who love our land most 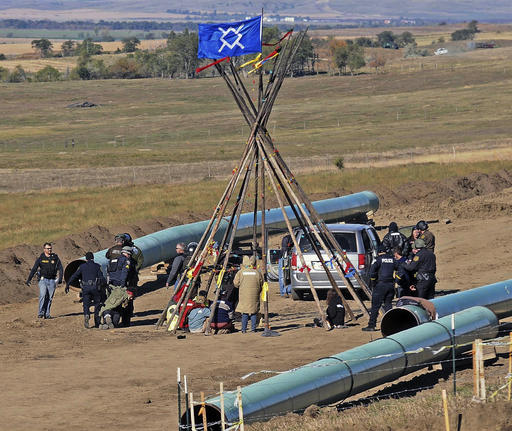 Law enforcement officers, left, drag a person from a protest against the Dakota Access Pipeline, near the town of St. Anthony in rural Morton County, N.D. (Tom Stromme/The Bismarck Tribune via AP)

When I was a child, special holidays had very little meaning in my household. “If you lift up a day, you put others down,” said my dad.

But one holiday got recognition, and it was not special or important. It was Columbus Day. Dad ranted and raved about the absurdity of honoring one who terrorized the keepers of the earth we call the USA.

Today, we continue to push Native Americans out of the way, break treaties we signed and ignore the fact they are a peaceful group who wants us to re-look at our poor attempt to save our land and water.

It was mid-afternoon when my partner, Andi, and I arrived at the Standing Rock Camp of the Lakota Indian Reservation. From the road we saw tipis, tents, fires, campers, vans, horses, corrals and thousands of people.

It looked like an overflowing KOA Camp. But as we entered, it was obvious, this was not a campground but a self-sufficient village of people from all over North America. The people were not there to enjoy the river or the surroundings. They were there to demonstrate against the Dakota Access Pipeline, which would carry almost 500,000 gallons of oil per day from North Dakota to Illinois, some 1,100 miles through private and public land, and specifically through land deeded to Indian tribes by our government through treaties. And it would cost $3.9 billion.

Within months this village grew from a few dozen Indians to thousands of people from diverse backgrounds wanting to stand with Tribal Nations against the Dakota Access Pipeline. “Water is Life” is their cry, and it is why tribes are protesting the governments stand on the pipeline.

This pipeline will go beside and under aquifers, lakes and the Missouri River. It was such a dangerous venture, the capital of the state of North Dakota re-routed it so that, if there was a spillage, it would not affect them, only those south of Bismarck. Putting it south meant it only affected Indian tribes.

Flags from more than 200 tribes dominated the dirt road into the camp. The Council Circle dominates the central part of the village. A kitchen with free food is provided three times a day. One tent has children’s books and a school. Another has clothes and supplies, all free for those of us who need them. Volunteers were cooking, cutting wood, and building facilities to house all the donations.

Programs for children, youth and elders were happening all day long. Even a legal team of volunteers is there for those considering direct action. Those of us demonstrating want to protect Mother Earth from the Dakota Access Pipeline. It is about constitutional rights and human rights, as well as energy and justice.

Columbus comes now as an oil pipeline, working its way through the land, polluting the waters. Centuries ago, he came and conquered; today we continue to come and conquer, ignoring our brothers and sisters who truly care for the land and water.