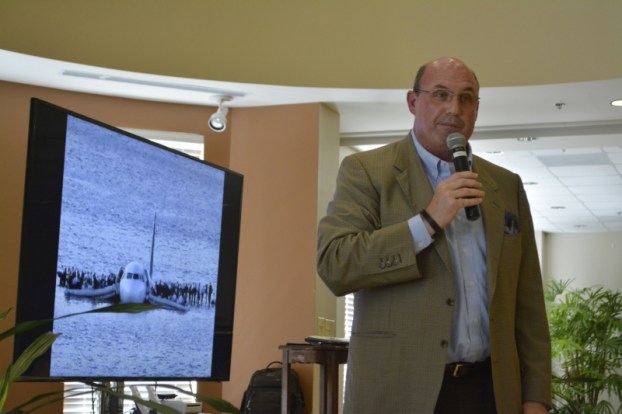 For the past two years, Dave Sanderson has told his story of surviving Flight 1549, ‘The Miracle on the Hudson,’ all over the world. Susan Shinn/For the Salisbury Post

With ‘Sully’ in theaters, Flight 1549 passenger continues to share story Sanderson holds a photo of Capt. Chesley ‘Sully’ Sullenberger with the flight’s youngest passenger, 6 months old at the time. Sanderson encouraged the mother to throw her baby to safety so others could exit the wing of the plane. She did. Susan Shinn/For the Salisbury Post

When Dave Sanderson was growing up, the words “I can’t” were not allowed.

His mother always told him, “If you can’t do it, you must do it.”

That advice served Sanderson well when he found himself on Flight 1549, the “Miracle on the Hudson” flight on Jan. 15, 2009.

“Sully,” the movie that chronicles this amazing story, was released in theaters Sept. 9 and has sparked a renewed interest about the flight. Sanderson, who became an author and motivational speaker as a result of his experience, came to Trinity Oaks retirement community on Tuesday afternoon. Sanderson also spoke here on the fifth anniversary of the flight, and residents were eager for him to return.

Sanderson, who lives in Charlotte with his wife and their four children, left a full-time job in sales two years ago to travel the world, telling his story. He travels 150 nights a year.

“God has taken me all over the world,” Sanderson said. But he was pleased that the Trinity Oaks appearance was a day trip for him.

Sanderson said he was simply an ordinary person in an extraordinary situation. Seven years ago, he was a high-producing salesman who traveled 100,000 miles a year. He was supposed to take a later flight, but ended up in seat 15-A. When he boarded, he did the same thing he always does — he put down his briefcase and picked up a magazine. And no, he didn’t listen to the flight attendants’ safety instructions.

“I do listen to the flight attendants on every single flight now,” he said, as the audience filling the special events room chuckled.

Seconds into Flight 1549, a bird strike knocked out both engines. None of the passengers realized what had happened, as they could only see the engine gone on their side of the plane.

When Capt. Chesley Sullenberger made the fateful announcement “brace for impact,” Sanderson said, “It was stone quiet.”

After the plane made a forced landing on the Hudson River, the crew and passengers worked as a team to get everyone out safely.

The flight happened eight years after 9/11.

“Another tragedy really could’ve happened,” Sanderson said, “but all 155 people on board survived.”

Sanderson said he prayed that if he died, he wanted his body to be in one piece. He also prayed that God would forgive his sins, he said. He grabbed his wallet and shoved it in his pants. Then he put his head down, and braced for the hard hit.

When he looked up, he said, he saw light coming through the plane’s window.

“Water was coming in immediately, just like that,” he said.

Many passengers escaped by walking over seats that had broken back, he said, but he decided to walk up the aisle and out of the plane.

He also remembered his mom saying, “If you do the right thing, God will take care of you.”

Because his thoughts were to help others, he was the last passenger off the plane. That meant there was no room for him on the wing. When a tugboat captain accidentally bumped the front of the plane, Sanderson jumped off and swam to the first ferry he could find. Two men — he doesn’t know who — pulled him up.

“I made it,” he said, “but I had nothing left. I was so cold. I had been in the frigid water for seven minutes, and it takes everything out of you.”

When he made it to the triage center, his blood pressure was 190/120, and emergency personnel feared he’d have a heart attack or stroke. His body temperature dropped to 94 degrees, but he recovered, and stayed overnight at Palisades Medical Center in New Jersey. He and another passenger were the only two who were hospitalized, he said. “The other 148 passengers walked home.”

His frozen underwear had been cut from his body, so he had no clothes. Someone from the Red Cross found him some sweats. It was a big deal to him, which is why he’s so passionate today about the Red Cross.

He got a police escort to La Guardia, and took a noon flight back to Charlotte. A flight attendant named Beth kept other passengers away from him as the plane landed. He was totally overwhelmed by this point, he said.

But he was later thrilled to receive his beloved Montblanc pen — his good luck charm — which was pulled from the bottom of the Hudson and repaired by the company for free. Now, Sanderson uses that pen at every book signing, and partners with Montblanc to raise money for the Red Cross.

Not long after he came home to Charlotte, he was asked to speak at the men’s pancake breakfast at his church, Providence United Methodist Church. He thought it would be a cakewalk, so to speak.

Some 600 people showed up, and they ran out of pancakes, he said. “There were some hungry, angry Methodists. But an older lady came up to me and told me, ‘I was questioning whether there was a God. You are the physical evidence that there is a God, and he does miracles. Thank you.’”

Sanderson said that the captain, crew and passengers of Flight 1549 did something that had never been done in the history of aviation.

“And that gave people hope,” he said.

In Romans 5, he said, we read that suffering produces endurance, endurance produces character, and character produces hope, and hope does not disappoint us.

Sanderson said he wants to continue to give people hope.

This month has seen some chaotic weather but with the cooler temperatures this week, more people are either turning on... read more