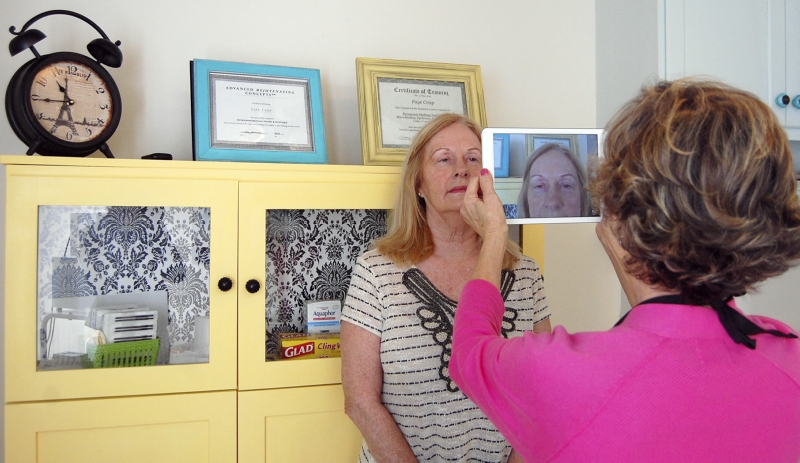 GRANITE QUARRY — Those looking for a semi-permanent solution to their thin, uneven eyebrows or wanting to fill in gaps in their eyebrows can pay a visit to Faye Crisp at Shear Creations salon.

Crisp is now offering microblading, a semi-permanent makeup technique that is used to fill in gaps, reconstruct and define eyebrows to create a fuller eyebrow look.

“It just makes somebody who looks good, better,” Crisp said.

Crisp was a hairdresser for 40 years, but issues with her shoulders eventually limited her to facials and other treatments she could do on clients while they laid on a table.

Crisp works out of Shear Creations beauty salon at 806 S. Salisbury GQ Ave. She talked with the owner about getting trained in microblading and permanent makeup and adding the technique to the facials she already did.

She said she has dabbled in art over the years sees permanent makeup as an art form.

“Doing microblading and eyes and lips, that’s a form of art,” she said.

Crisp became certified in microblading, eyeliner, lips and color correction by Samira’s Permanent Makeup Training Center in Greensboro about one month ago.

She has already performed the technique on the eyebrows of a few people who work at Shear Creations, including Judy Barnhardt.

Barnhardt said she had to dye her eyebrows every four weeks to make them noticeable, and even then she still had to fill them in with an eyebrow pencil.

She said the microblading looked good on the other girls Crisp had done at the salon, so she decided to undergo microblading to save some money and time.

Crisp first took a before-picture of Barnhardt so she would be able to compare her eyebrows to the finished result. She then used a thread to measure off where the eyebrow should start and end and where the arch should be. She used a cream to numb the area and used the microblading tool to create each stroke.

Permanent makeup, or micropigmentation, uses a needle to insert pigmented granules beneath the upper layers of the skin, like a tattoo, according to WebMD. Individuals can also get permanent eyeliner and lip color. Crisp does both.

It usually takes Crisp about two hours to complete the process. There is no down-time, so the client can go about their normal day right after the process.

The brow will do most of its healing in about a week and will fully heal after a month. Clients go back in for a follow up visit after a month for a touch-up, during which the client can darken or lighten the color if they want.

Once the microblading is done, Crisp applies a sealer on the brows and tells clients to leave their brows alone for 24-48 hours. She said there may be a little bit of flaking, but that’s just part of the healing process. She takes an after-picture so the client can see how their brows have changed.

According to WebMD, allergic reactions to the pigments are rare. Other possible negative reactions include granulomas, masses that form inside tissue, and keloids, overgrowths of scar tissue or a raised scar. There is also a risk of infection if tools are not properly sterilized.

There have also been reports of redness or inflammation after MRIs.

The microblading tools Crisp uses are disposable. She said she uses the tool once and then throws it away.

The new brows can last for up to two years, depending on how much the brows are exposed to the sun and water. The initial appointment and follow-up appointments together cost $300 at Shear Creations.