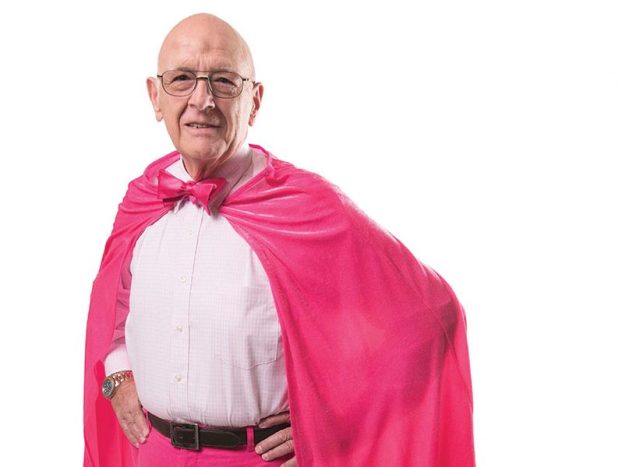 ‘There were no men to call:’ Survivor shares story of his male breast cancer

LANDIS — It was only a few weeks ago that a man at the Charlotte Ride for the Cure walked up to Dorland Abernathy and asked him what he was doing out there “in all that pink?”

It’s a reaction Abernathy has gotten used to. In October, when he dons a pink sports coat and bow tie, or his hot-pink pants and velvet cape, people often don’t know what to make of him.

When asked, Abernathy kindly, patiently explains: He, too, is a survivor.

“I was so surprised when they told me I had breast cancer,” he said. “I had never called that part of my anatomy a breast. That was my chest.”

Abernathy, a retired English teacher who now serves as the mayor pro tem of Landis, was first diagnosed with breast cancer in October 1997. But his doctor, William Birmingham, told him he’d likely had the disease since 1995.

It started off with fluid drainage from Abernathy’s right nipple. In 1995, Abernathy was living in Waukegan, Ill., and weighed somewhere between 330 and 350 pounds.

“Oh, don’t worry about it,” his doctor at the time told him. “It happens to fat men.”

It wasn’t painful, but it was embarrassing. Abernathy stopped wearing solid colored shirts and began sneaking some of his wife’s cosmetic pads to soak up the pinkish fluid. But when Abernathy and his family moved to south Rowan, he got a new job — and a new doctor.

During his first visit, the physician’s assistant examining Abernathy asked, “How long have you had that lump in your breast?” And Abernathy asked him, “What lump?’”

The office referred him to Birmingham, who ordered a mammogram. It’s an experience Abernathy recalls vividly.

The walls of the waiting room were painted pink, and the room was decked out with white wicker furniture. The receptionist stumbled and stuttered through explaining that, if he liked, he could feel the breast forms on the table to see if he could find a lump.

When his name was called, Abernathy went back to the mammogram room with a group of women.

He said they had been laughing and talking animatedly, but when he joined them, they stopped.

“And it was dead silent the rest of the way through the hospital,” he remembered.

Luckily, he went first. But what he remembers most is not the mammogram itself, but his reaction when the female technician was trying to get a sample of the drainage fluid — he burst out laughing. She asked him what was “so funny.”

“I’m an English teacher and a writer and I can’t even express myself,” he told her.

Birmingham ordered a lumpectomy, and on Monday, Oct. 6, 1997 — just three days after his 47th birthday — Abernathy went under the knife. He figured all the fuss was “much ado about nothing” and planned to return to work on Wednesday. But Tuesday, Birmingham called him into the office.

Abernathy said he and his wife, Collette, were the last people in the waiting room and it wasn’t until every other patient had left the building that they were called back.

“And Dr. Birmingham came in and sat with his back to me. He didn’t look at me,” Abernathy recalls.

Birmingham told Abernathy he had a rare form of breast cancer, cystic papillary carcinoma. Abernathy found out later that before giving him the diagnosis, Birmingham had put in several calls to his medical school professors and to an Army hospital. Abernathy was his first male breast cancer patient.

The three sat for a moment, stunned.

“I didn’t know men could get breast cancer,” he told Birmingham.

Jill McNeely, breast health navigator with Novant Health Rowan, said that less than two percent of all breast cancers will be male patients. The lifetime risk for men is 1 in 1,000, versus 1 in 8 for women.

“But when you’re the one involved, percentages don’t matter,” Abernathy said.

Sitting on that examination table in 1997, Abernathy didn’t think about statistics.. He thought about his wife, and the two children who still lived at home. If the worst happened, how would they be taken care of?

So what mattered was what would happen next. At first, Birmingham suggested they watch it for a while.

“And that’s when my wife screamed at him and said, ‘No, this is not something we watch,’” Abernathy said.

The two had known a woman who died of breast cancer after doctors decided to wait and see. Birmingham scheduled a second surgery to perform a modified right radical mastectomy for Monday, Oct. 13, just one week after Abernathy’s first surgery.

That night, Abernathy went home and searched Google for information about male breast cancer, but came up empty. He talked to his pastor, and then he called a woman from his church he knew had struggled with breast cancer.

“There were no men to call that I knew of,” he said.

On Wednesday, his pastor asked Abernathy to share his story at a prayer meeting.

“How do you go about telling somebody that you’ve got something like that?” He wondered, “…This was new territory for me. I was walking off into the darkness.”

But Abernathy was one of the lucky ones — an examination of the mastectomy tissue showed that the cancer hadn’t spread. It was a “great sigh of relief.” Two years later, Birmingham hesitantly used the word “cured.”

Abernathy said he knows he is fortunate. He was not one of the 440 men the American Cancer Society reports who die each year from breast cancer. He never had to deal with the pain, swelling or sickness that can come from breast cancer and its cures.

For the past 17 years, he’s been advocating, encouraging men to get themselves checked. The most common reaction he hears is, “Check my what?”

When he shows up to breast cancer events, decked in pink, he’s often the only male survivor there, and he said he’s yet to meet another one. And while he’s seen a rise in awareness, resources and information for men with breast cancer is still limited.

McNeely said that approximately 1,600 to 1,700 men are diagnosed per year, and the American Cancer Society predicts that by the end of 2016, 2,600 men will be diagnosed with invasive breast cancer.

For men, the biggest risk factor is genetics, McNeely said. While Abernathy was cleared of breast cancer 17 years ago, he also saw his father and brother die from different forms of cancer, and he knows that there are no guarantees.

“Life is not certain in this body,” he said. “Death is certain.”

But he thinks back on that evening in the doctor’s office, and thinks about what would have happened if he’d waited, like Birmingham suggested. His future may be uncertain, but if he had waited Abernathy is sure he would have missed 17 of the last 19 years. And the long, railroad track-like scar still stretches across his chest and over to his armpit.

“It was a wake-up call and a reminder that you don’t have forever,” he said.

Perhaps he’ll never get to do everything he planned. He’ll never own a horse farm, and he’ll never open a Christian boarding school. But he doesn’t waste time, and he tries his best to be effective — it’s why he joined the Landis Board of Alderman.

And every chance he gets, Abernathy advocates.

If a man notices something different about his chest— be it tenderness, redness, swelling or drainage — he should go talk to his doctor about it immediately. McNeely advises that men and women should know what their own breast tissue feels like. If something changes, call a doctor. Abernathy encourages women to talk to their husbands about breast cancer — if women can get it, so can men.

“Don’t let someone find it at autopsy,” he said.