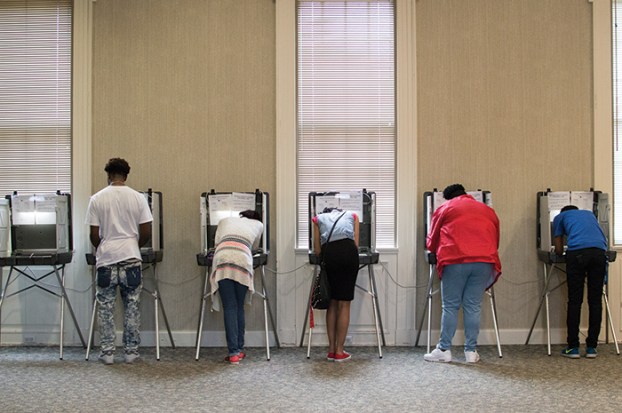 We’ve done ourselves a grave disservice in the 2016 election.

In November, American voters will cast ballots in an election that’s filled with candidates we don’t like. A majority of voters have an unfavorable opinion of Republican presidential nominee Donald Trump and Democratic nominee Hillary Clinton. Even Libertarian candidate Gary Johnson isn’t immune to the wave of discontent. Polls show more voters have an unfavorable opinion of Johnson than those who don’t.

It’s a sharp contrast to the 2012 and 2008 elections, when polls showed significant voter excitement. Polls taken just before the 2012 election showed more people had an unfavorable opinion of President Barack Obama, the Democratic nominee, and Mitt Romney, the Republican nominee, than those who have a favorable opinion. Still, those numbers were relatively close and it wasn’t a majority of people.

As a voter who hasn’t cast a ballot in a presidential election yet, I’m disappointed. Whether it was because of of laziness or a lack of interest, I didn’t cast a ballot in 2012 — when I was old enough to vote. Now, I’m faced with choosing between the better of two evils rather than a candidate I’m genuinely excited about.

There are arguments that staying home, voting for a third-party candidate or skipping the presidential election would help elect a potential disastrous candidate. That argument, however, doesn’t mean much to me. Honestly, I’d prefer that neither Clinton nor Trump were elected president.

Sure, there are some positives about both major party candidates.

Trump offers a break from traditional politicians. Voters feel that politics as usual has left us with a broken system in all areas of society. Trump also frequently demonstrates that he’s foul-mouthed. He has praised himself for having “a winning temperament,” but there are real questions about how he might act in office. Good investigative reporting has also revealed that Trump’s history is checkered with bad business deals, bankruptcies and a charity that’s operated in potentially illegal ways.

The latest revelations about possible sexual assault have drawn condemnation from a broad swath of Republicans. A handful or more have gone as far as rescinding an endorsement.

So, how is Trump viewed by the electorate?

As many of her supporters note, Clinton has an extensive history in politics — experience that works in her favor. She seems to have a better understanding of important issues facing America than Trump does. However, she also comes with significant baggage — emails and Benghazi, to name a couple.

The latest batch of leaked emails are from her campaign chairman, not Hillary herself, and are unrelated to the scandal that tied to her use of a private email service in her home. However, the statements in the leaked emails don’t help a candidate who’s already viewed unfavorably by a majority of the electorate.

Some of Clinton’s staffers, for example, discussed in leaked emails whether people chose to be Catholic solely because of political beliefs. Another email contained the phrase “needy latinos” in the subject line.

With such a negative opinion of both candidates, both sides should be worried about turnout. An Elon University poll in 2012 found that 72 percent of North Carolina voters were very or somewhat excited to cast ballots in the presidential election. The most recent North Carolina polls don’t include questions about excitement. The number is surely lower than in 2012 and 2008.

Our democratic system should seek to encourage future generations to participate in democracy. Now, both major political parties have chosen candidates that are unlikely to encourage turnout in the same way candidates did in 2008 and 2012.

My 13-year-old brother perhaps put it best recently when he said he would feel cheated if this was the first year he could cast a ballot in a presidential election.