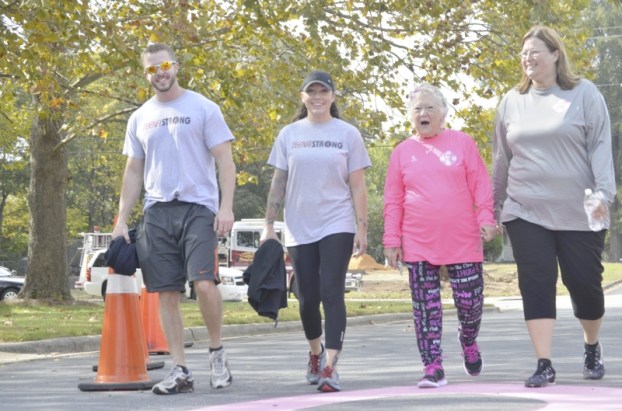 Participants in the Landis 5K Breast Cancer Run/Walk event make their way toward the finish line during Saturday's event. From left are: Chris Reddeck, Jessica Taylor, who wore T-shirts for Reddeck's mom, Teena, who has breast cancer, as well as Joyce Mock, a breast cancer survivor and co-worker Kim Deal. Shavonne Walker/Salisbury Post

LANDIS — Joyce Mock —  a lively woman wearing black tennis shoes with bright pink laces — was all smiles as she crossed the finish line. She didn’t need to be the fastest nor the first. What mattered was that she finished.

Mock, 72, was among 55 participants in the Landis Breast Cancer 5K Run/Walk event held Saturday. A breast cancer survivor, she walked along with her co-workers from the YMCA.

The proceeds from the event benefit Landis families who are in need and who may be undergoing cancer-related medical costs and other expenses.

Mock had six weeks of radiation treatments beginning in August and four rounds of chemotherapy starting in March. She had a lump found in her milk ducts and required no surgery.

She said she talked over her options with her three sons, 44, 48, and 35. They supported her, as did her church family and work family. Her sons took her to her first chemotherapy appointment, but after that Mock said she told them she could go by herself.

Her motivation has always been to be positive.

There wasn’t a history of breast cancer in Mock’s family, but one of her sisters did have kidney cancer. Above all else, Mock was thankful to Jesus for her healing.

“I said thank you, dear Jesus,” she said.

She finished the race with her support team — Kim Deal, Jessica Taylor and Chris Reddeck. Both Taylor and Reddeck were also walking in support of Reddeck’s mother, Teena, who discovered she had breast cancer eight months ago.

Teena began her first round of chemotherapy treatments in April and her second round in July. Her last treatment was two weeks ago, Reddeck said.

She’s a kindergarten teacher in Archdale. A cousin of his created T-shirts that say “Teena Strong.” He and Taylor wore those shirts Saturday.

Kate Martin, 9, pretty much ran the entire race in the lead, although trophies weren’t given out this year. The young girl participated with her mother, April. They traveled to Landis from Florida, where April’s husband is stationed in the military.

The Martins came to visit April’s father, Craig Sloop, a former Landis alderman, and figured they’d support the race while in town.

April said two of their family members have had cancer, and they wanted to show support. Kate wanted to run as well. She is a member of Girls on the Run, a youth development program that teaches girls life skills through interactive lessons and running games.

This wasn’t Kate’s first 5K and it won’t be her last. She will compete in her next race in December.

If trophies were given this year, Will Bradshaw, 10, would be crowned the winner. He said at first he was nervous with all of the people at the race, but he kept a steady pace, stopping only briefly. His gray shirt bore the words, “The Thrill,” on the back. Will “The Thrill” was running in support of his mother, Wendi Bradshaw, a breast cancer survivor. Mother and son, as well as dad Dwight, finished the race and gathered together afterward.

Wendi becomes a little emotional when she thinks about her family.

“They are my cheerleaders,” she said.

Wendi was diagnosed in 2013 after having a mammogram at a mobile mammography unit at her job.

Wendi said she had put off having a mammogram and decided she couldn’t avoid it, since it was conveniently located in her workplace parking lot. After learning her tests were positive for cancer, she elected to have a mastectomy and four rounds of chemotherapy.

She is now cancer free.

Her husband, Dwight, said he wanted to run in support of his wife and the others there who have walked similar roads with cancer.

He said the run hurt a little, but he knew if his wife and others could undergo cancer and survive, then he could run for them.

“It’s nothing compared to what these survivors do,” Dwight said.

At Senior Centers 2016 in Philadelphia, Rick Eldridge, executive director of Rufty-Holmes Senior Center in Salisbury, was presented with the... read more