West Rowan’s balanced attack is too much for Mustangs 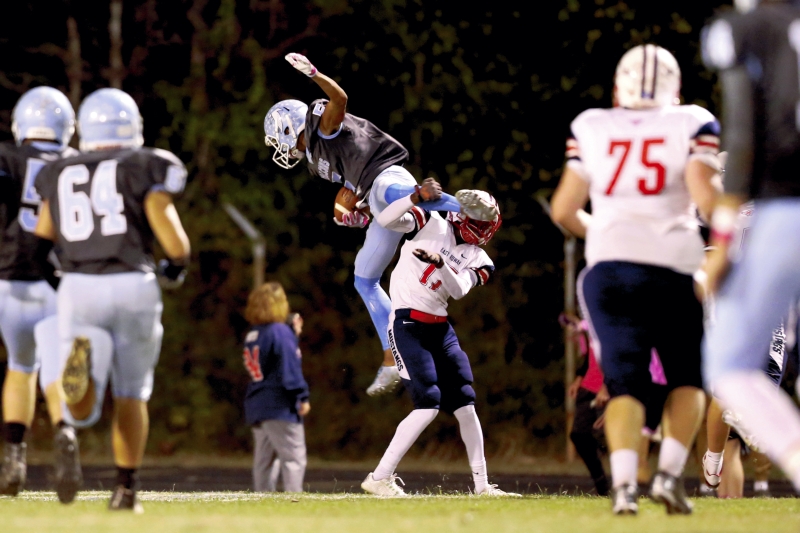 MOUNT ULLA — Playing their second game of the week, the West Rowan Falcons used a balanced offensive attack to cruise past county rival East Rowan on Friday night, 49-20, and now the stage is set for a South Piedmont Conference championship showdown at Concord next week.

The Falcons (7-1, 6-0 SPC), who played just this past Monday with a lopsided win over Central Cabarrus, showed they could quickly re-focus on the Mustangs in devastating fashion as they rolled up a 35-7 halftime lead and never looked back. East Rowan (3-5, 22-4 SPC) simply could not handle the speed and elusiveness of running back Jovon Quarles and receiver Kortez Weeks plus the sheer power of halfback Martavio Rankin. The trio combined for 373 yards of offense  and seven touchdowns in the romp.

“Every week, we want to be a balanced offense and take what the defense gives us,” said Falcon head coach Joe Nixon. “And we were able to do that tonight.” He also had praise for his sophomore quarterback Payne Stolsworth who directed the offense onslaught effectively while passing for 205 yards and two TDs. “He is doing a great job running our offense and is developing as a football player.”

But the real stars on homecoming night in Mt. Ulla were Rankin with a career best 122 yards and two scoring runs while Quarles ripped off TD runs of 32, 53 and 9 yards as part of a 116-yard rushing night. Weeks continued to frustrate opposing pass defenses with 6 catches for 135 yards and and two scoring catches.

“That was our plan tonight to balance our running and passing game,” Weeks said. “Our offensive line did a great job and all our hard work paid off.”

Quarles, who is closing in on a 1,000-yard season (988 and a county leading 12 TDs), was also quick to praise his offensive line for enabling him to break free on three scoring runs. “The blocking was very good and they opened some big holes that gave me the opportunity to score tonight.”

East Rowan was hampered from the outset when their top offensive weapon and 1,000-yard rusher Max Wall sat out the first quarter for disciplinary reasons. By the time he got into the game, the Falcons were off and running with a 28-0 lead midway in the second quarter. Wall never really got untracked against a stifling West Rowan offense as he was held to 23 yards rushing and 40 yards in receptions.

“We were missing some starters tonight due to off-the-field issues, East coach Kenneth McClamrock stated. “We got down 14-0 quickly and that is tough to bounce back against a team like West Rowan. But there were some bright spots on offense, defense and special teams at times tonight.”

The brightest Mustang performance came from senior quarterback Tate Houpe who enjoyed his most productive night of the season, hitting 21 of 29 passes for 226 yards, one interception and a pair of TD passes. He hit Franklin Downing deep down the left side for a 44-yard scoring play just before the half then found Steven Hardin from the nine with just 8 seconds left in the game.

The other East touchdown came on the first series of the second half when West lined up for its first punt of the game but a bad snap enabled Hardin to break through and block Stolsworth’s boot. Wall was right behind him, scooped up the ball at the 15 and ran in for the touchdown, but that just closed the gap to 35-13 and East could not build any momentum the rest of the way.

“I was proud of our players and coaches for getting prepared during a short week,” Nixon said. “Our players showed a lot of maturity and character for getting ready to play tonight.”

The Falcons now head to Concord High next Friday for a first place showdown with the Spiders at Bailey Stadium. Concord is a game back of West with three weeks left in the regular season. “It is obviously a big game for us,” Nixon said. “But we are planning to prepare just like we do every week. It is the next game on our schedule but it is an important one.”