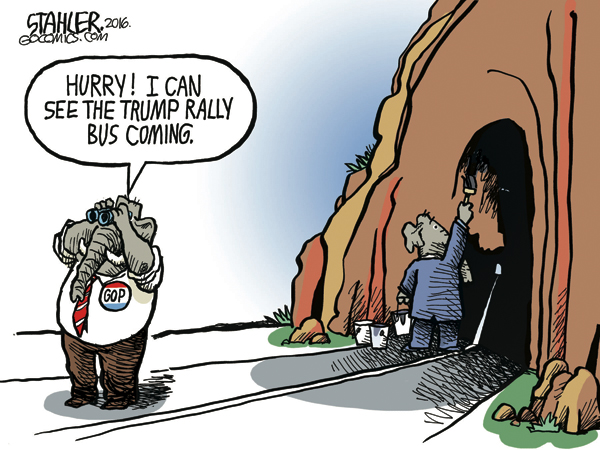 It’s been ruled by the courts that same day registration is still available. The voter ID designed to keep minorities from voting was ruled unconstitutional by the Supreme Court of the United States.

Voter ID was not designed to hinder minorities from voting. Voter ID makes sense to a lot of people.

Many activities and retail transactions require, by law, the participant to show an ID. Are all those laws designed to prevent minorities from participating in the specified activities? Would you support Supreme Court decisions that found those laws to be unconstitutional?

Not surprising at all. Voter fraud has developed into an atrocious attack on the very foundation of this country. Just do an internet search for “hidden cam NYC Democratic official” … This clearly exposes why certain politicians and party members are totally opposed to requiring the same type of ID widely accepted for numerous other rights and services. Dang shameful.

If there was any disrespect shown, it was by McClerin in refusing to accept the commission’s decision. I certainly wish him well in whatever endeavors he chooses to support in the future. We on the volunteer boards, along with elected officials and paid town staff, are working hard to improve our town, our reputation and to attract home owners and businesses to our location, and we need boards who (even though there is disagreement) will band together and work cooperatively to enhance our town.

I encourage any Spencer resident to volunteer for one of our boards and get involved in making your town a better one.

Thank you for the clarification on this matter. I’ve served on boards in the past. Been part of the majority vote at times, as well as the minority vote at other times. I’ve even been a lone dissenter. But that is not the same as having been “disrespected.” In fact, I have found Spencer’s volunteer boards to be filled with extraordinarily neighborly folk like yourself, who respect those with whom we may disagree.

I completely agree. I just can’t conceive any sane person would think Trump is fit to be president. He would be a disaster for our country.

We need someone who will keep our country progressive and not undo all the things President Obama has done to get us out of the Bush depression. There is only one person that can do that while giving equality to all people and keep the rights of women we have fought so hard for, and that is Hillary Clinton. She will be that role model we need.

Boo hoo, poor little children are scared of the real world. What scares me is knowing what Hillary has actually done, not what Mr. Trump has said. I’ve yet to hear a word come from his mouth that is not the way the real world is, not this politically correct world you all wish for. I and my family will vote for a change in Washington, Trump 2016..

Soon enough the embarrassment that is Trump will be just a bad memory, and Mrs. Clinton will have her rightful place in the White House. She will survive all of the lies that have been spread about her, and rise above all of the ignorance and hatred of the Trump campaign and his followers. Hillary 2016!

Ada continues the party slander attack on the Clinton Foundation, despite so much evidence to the contrary.

Better yet, go to guidestar.org and look at the Form 990s yourself.

How can you slander the Clinton Foundation while at the same time ignoring allegations by New York state of the Trump Foundation? http://mobile.nytimes.com/…/trump-foundation-money.html

You actually recommended a 25 percent flat tax if you were running for president? That’s a very good reason you’ll always be standing on the outside looking in.

During the primary debates, Ted Cruz suggested a flat tax of 15 percent. I wondered then if that wasn’t a little high. I would like to see a Fair Tax enacted; pay a small tax on everything you buy with the possible exception of food. Then kill that worthless 80,000-page tax code with all of its loopholes that members of Congress have inserted to buy votes.

What Donald Trump did was to use the existing law to avoid paying taxes (there is a difference in avoiding and evading). He did nothing illegal, and certainly nothing that any number of big-money people haven’t done and are not doing now. After all, the U.S. Congress said it’s OK, and presidents down the line have signed it into law.

Please don’t knock Ada Fisher. She is stating the “what is” regarding IRS rules and the U.S. Constitution. If you want either changed, then work to that effect. Otherwise, you are simply stating an opinion.

And all of those who do know the tax rules, and have followed them to file taxes for others, know that what she is stating is fact. Please stick with the facts.

I think 25 percent is too high. I prefer two brackets: 10 percent and 15 percent, no deductions.

We can haggle over the threshold, but everyone needs to have skin in the game. What purpose does it serve to have a 39.6 percent tax bracket if the wage earner actually pays 0-5 percent in federal taxes? The accountants and tax lawyers do well. IRS employees are well-compensated. A simplified tax system will result in more revenue and fewer public sector employees. Win/win.

This is indeed so sad. No time for judging because this mom lived in her own hell that night. I prayed for her and the family because that is what a Christian does.

Judge not. Let he who is without sin cast the first stone. I’m waiting.

This story has broken my heart. I can almost feel the confusion and pain this child experienced as she cooked. Guaranteed: this was caused by distracted parenting … pay attention to your child, folks!

How do you forget to look in your back seat and see if you have forgotten something?

Let’s not rush to judgment. We don’t know what people may be going through to distract us. All we can do is ask God to keep us alert. Do we have room to judge? Probably not. I don’t know the young lady and what she is going through. But one thing that I know is that we can lift her up in prayers.

Amen to that. I couldn’t have said it better. There’s this little thing called grace. We have no idea the circumstances around this story.

I absolutely understand how this could happen. Prayers for this family. Jesus, here’s another baby for you to rock.

… Editorial: Is tragedy of child’s death also a crime?

Thank you for this article. Moms today, especially working single moms, are under so much pressure to juggle everything and be perfect when doing it. All it takes is one small disruption in your routine — something as simple as a road block causing a detour — to distract you enough to forget. My heart goes out for this mom.

My family loves this little town of Salisbury. One of my 5-year-old’s favorite things to do is grab a $1 bill from her piggy bank, go to Critters and hand that dollar to Mr. Bob in exchange for quarters to ride Champion.

But when my 7-year-old entered school last year (our first encounter with RSS), to say that our family was disappointed is an understatement. My 7-year-old had to deal with chairs being thrown at her face, being spit on and being verbally threatened by classmates …

It is so sad that in this great little town, where my husband and I pay a lot of money in property taxes, we can’t even send our children to the public schools. Needless to say, our children are in private schools this year. So disappointing.

There is a huge question that must be answered when deciding what needs to be preserved: is it worth it?

There are several conditions that must be met to get a “yes” answer. First, is it worthy of preservation? Is it a common thing, or is there a rarity or uniqueness to it that makes it special? Second is condition. Is it able to be preserved, or is it cost prohibitive or to the point where preserving it would destroy what is still there? Finally, what would its purpose be if it were preserved / restored?

The truth is that historical societies need to weigh these questions carefully and make informed and sometimes difficult decisions. …

In the case of the filling station in question, it’s a unique structure that is made out of pink granite. … If you told me it was made out of the same pink granite that our area is renowned for, … that would add to its significance. Besides, how many stone gas stations are there? From an architectural standpoint, I think its a given that the building is unique and that does give a big push for being worthy of preservation.

Structurally, it can be assumed that being made of such a durable material like granite, that we can safely assume that restoration would not be too huge of a challenge.

So we arrive at the last question. What would its purpose be? With modern environmental concerns along with its location, I think its safe to say that it’s pumped its last gallon of gas. Another person suggested that it would be a good spot as an art co-op. That is a promising idea, which would compliment locales such as Rail Walk.

The current one-year hold, I don’t think, is too much to ask. It has already sat vacant for several years. What’s one more at this point? Especially if the current attention attracts a developer who would work its unique design into something that could be special. And if it doesn’t pan out, then there is, perhaps, a missed opportunity, but also an opportunity to create something potentially greater.

Your legislature has raised the sales tax on many services and electricity (and put a new sales tax on natural gas) the past two years, so I don’t think your scare tactic carries much weight. Your Art Pope legislature had to do this to raise the money they lost when they cut the tax rates for the rich and big corporations. Print the real tax situation.

State Sen. Bob Rucho was the architect of “tax reform” — the implementation of 130+ service taxes. Citizens of this once-proud state pay taxes on tickets to sports events, auto repair, HVAC repair, just to name a few.

This “tax reform” has removed many tax breaks used by middle- and lower-income people in preference for corporate tax cuts … while the average citizen foots the bill for all state services.

The great income tax reduction only affects the corporations of this state and not the citizens. Our income tax rate was “lowered” from 5.75 percent to 5.5 percent, but only takes effect in January 2017. … Many have discovered while filing our taxes we “owe” the fine folks in Raleigh when our tax returns are filed.

I agree with Ralph Walton; your scare tactics won’t work on the informed electorate. As for the Pat McCroys, Bob Ruchos and some of our local state representatives … it’s time for them to go. North Carolina, we can do better.