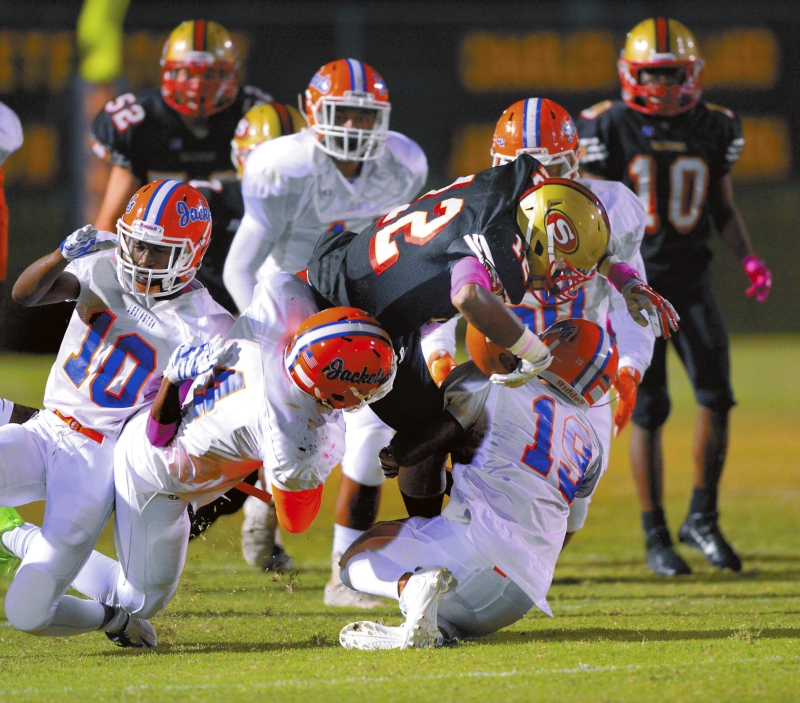 Wayne Hinshaw/for the Salisbury Post ... Salisbury running back Cameron Horne (12) ran through and over Lexington last night in the Hornets’ 20-10 victory. Horne collected 128 yards and two touchdowns. Above, Lexington’s Cameron Baker (4) and Christian Perez (19) are making the stop.

The Hornets were virtually mistake-free on offense Friday night at Ludwig Stadium and enjoyed a 20-10 Central Carolina Conference victory over Lexington.

Neither a penalty nor a turnover marred the offensive stat sheet and despite having no passing yards, Salisbury ran to the win with 239 yards rushing.

“We knew all year that we could play that way, if we didn’t turn the ball over,” said Crowder. “That was the key tonight. All season to this point, turnovers have been the problem. And tonight, no crucial holding penalties or false starts that have been putting us in first-and-15 and first-and-20 situations. We eliminated those things, played physical ball and the kids ran hard.”

Salisbury’s clean and green attack was led by senior running back Cameron Horne, who picked up a lot of his 128 yards after contact. Horne carried the rock 24 times and scored both of the Hornets’ first-half touchdowns.

“Horne runs hard,” added Crowder. “With him and (Trell) Baker, it kind of gives us a little thunder and lightning.”

Baker, a junior and about 25 pounds lighter than the rugged-running Horne, was more of the outside threat last night and picked up 79 yards on 14 carries.

“This was my best night running the ball,” said a still-pumped up Horne after the game. “I told the OL this week ‘that we need to get our snaps down and we need to block,’ and that’s what they did. All of these yards belong to the offensive line. I told those guys that I believed in them and if they block, we’ll score. That’s how it has to be every game.”

Salisbury’s defense came up big as well, allowing yardage but coming up with key stops when it had to. The Hornets kept Lexington out of the end zone until only 4:58 remained in the game, a 3-yard run from the Yellow Jackets’ Nasheed Peoples.

The ensuing kickoff, something between an onside kick and a pooch, bounced off a Salisbury up-man and the Yellow Jackets recovered. A 22-yard run by quarterback Saafir Craven put Lexington in business at the Salisbury 19, with plenty of time left.

However, two incompletions and a sack of Craven by linebacker Tywun Rivens left Lexington with a fourth-and-15. Craven connected with Peoples for eight yards, but it not enough and Salisbury took over on downs.

“The defense played very well,” said Crowder. “Lexington has some great athletes — the quarterback is pretty daggone good. We felt that they could break one at any time but we just seemed to bend and not break. They had more yards than we did but we got the points.”

On the first play of the second period, Lexington kicker Ulises Velazquez booted a 28-yard field goal to cut the deficit to 7-3.

Late in the first half, Salisbury went 70 yards on just five plays to go up, 14-3. The key play was a 32-yard scamper down the left sideline by Baker, with a defensive penalty tacked on as well. Horne picked up 20 yards on the next three plays, including a 2-yard scoring dive.

Lexington’s first possession of the second half was a 3-and-out, paving the way for Salisbury to keep the momentum.

Starting at its own 42, the Hornets chewed up most of the third quarter clock with a 15-play drive of all runs and no penalties. Four different Hornets carried the ball on the drive and Nick Austin scored a 6-yard sprint around the right corner.

Craven rushed for 92 yards on 15 carries to lead the Yellow Jackets and passed for 108 yards as well. Running back Jayron Roberts picked up 56 yards on 11 carries.

Adrian Craven was the leading receiver in the game with four catches for 61 yards.

Lexington (3-4, 0-2 CCC) hurt itself with eight penalties for 66 yards, seven of those flags hampering drives in the first half to the tune of 51 yards.

The Yellow Jackets had 279 total yards, 40 more than Salisbury’s ground attack of 239.