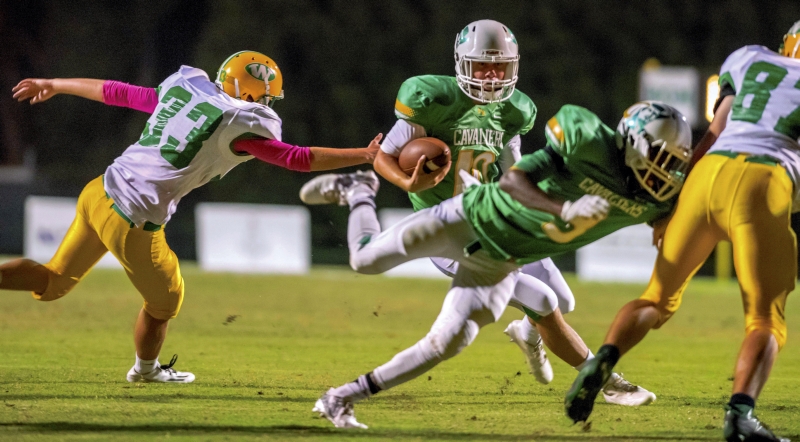 SPENCER — It’s hard to say what was more fun for North Rowan senior Dalynn Cuthbertson on Friday — being named homecoming king at halftime or scoring his first varsity touchdown in a 42-0 Central Carolina Conference romp against West Davidson.
“Homecoming week can be a coach’s worst nightmare,” North’s Ben Hampton said. “We go all-out for the celebration here, but we did a pretty good job of keeping our focus.”
Many North players served as escorts for the homecoming court at the half, but it’s not like Hampton had adjustments to make. North led at the break, 21-0, and had the game under control.
Cuthbertson, De’Andre Gray and Alonzo Sirleaf caught the three touchdown passes fired by North QB Corbin Smith, who matched the career high he set early this season against Carson. Smith added a rushing TD, while Jaleel Webster accounted for two rushing scores.
North’s stifling defense got interceptions from Chris Clodfelter and Keith Carroll. North had four sacks, plus eight tackles for loss on running plays.
North’s defense earned its first shutout of the season. Other than a 40-yard completion from QB Brett Lingerfelt to 6-foot-4 tight end C.J. McKinney, it was an empty offensive night for the Green Dragons (3-5, 0-2 CCC).
“That tight end was big, but he’s so big it was easy to find him,” said Cuthbertson, who played on both sides of the ball for the Cavaliers. “And our cover guys were faster than him.”
North (6-2, 2-0) is tied for first in the CCC with East Davidson. The Golden Eagles (7-1, 2-0) beat Thomasville, 21-14.
North got the ball first and pounded 56 yards in steady chunks on the ground. Webster, who had eight carries on the opening drive, got the TD from the 5. The first of six Jacob Young PATs made it 7-0.
“We expected to see five defenders in the box, and that’s what we got,” Hampton said. “So we were going to establish the run first, and then spread the ball around to our receivers. The gameplan worked because the offensive line played very well. We won the battle at the line of scrimmage.”
That first drive took a while.
“I came over to the sideline, looked up at the scoreboard, and half the first quarter was gone,” Smith said.
It was 14-0 before the quarter ended. North moved 62 yards for its second score, mostly on Jaden Perry’s 42-yard gallop on a draw. Smith got the TD from the 10.
“I read the defense, and the numbers were there for me to run it,” Smith said.
After a sack and a short punt, North had a short field and made it 21-0 when Smith connected with a streaking Cuthbertson for a 34-yard touchdown.
“Corbin is a smart quarterback,” Cuthbertson said. “He saw the safety blitzing. He knew I’d be open.”
The onslaught continued after the break. Smith threw a touchdown pass to Gray down the middle to make it 28-0, and then Smith tossed a high fastball to the strapping Sirleaf to make it 35-0 on the final play of the third quarter.
“We knew those pass plays should be there for us all night,” Smith said. “Our receivers were coming off the ball very fast. They were running by the defenders.”
Webster punched in North’s final TD, his fifth of the season.
“It was just a good team effort,” Webster said.
West Davidson battled. Defensively, the Green Dragons stood firmly against most running plays. Offensively, Tanner Garrison fought for more yards than an average back would’ve gotten.
“Their back did run hard,” Cuthbertson said. “That’s a solid back.”
•••
NOTES: Little went right for West Davidson, which watched a punt take a 15-yard bounce in the wrong direction. … West Davidson lined up for a 29-yard field goal and was handed a first down by a North penalty for 12 men on the field. But a few minutes and a few negative plays later, the Green Dragons were trying — and missing — a 44-yard field goal. … Darren Williams had two sacks for North. … Clodfelter nearly scored on his interception but had the punched ball punched away at the West Davidson 9. … Young boomed several touchbacks and crushed a 68-yard punt. … North sprinter Payton Russell was elected homecoming queen.