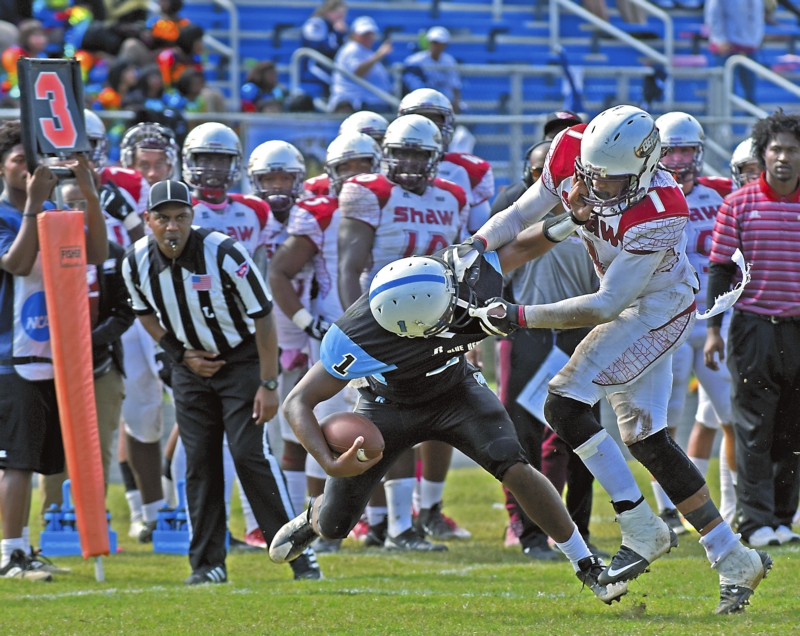 Wayne Hinshaw/for the Salisbury Post ... Livingstone QB Xaiver Longerbeam, left, and Shaw’s Keelan Jones are pulling each other’s face mask as the official reaches for his flag. A penalty was called on Jones.

Reports of the Blue Bears’ demise may be premature after Saturday’s well-executed 23-12 Homecoming Day victory over winless Shaw — a triumph that gave them not only a pulse, but also hope.

“Our coaches put us in good position and we didn’t beat ourselves this time,” safety Demasio “Big Mace” Williams said at bustling Alumni Stadium, where Livingstone (2-5, 1-3 CIAA) snapped a four-game losing streak. “It gives us our confidence back. Now we know we can win.”

Livingstone held the ball for 35 minutes, suffered only one turnover and outscored Shaw (0-7, 0-4) for the third straight year. A season that was going sour is suddenly sweet again — at least for one cloud-covered afternoon.

“This stops the bleeding,” said head coach Daryl Williams. “I’m excited for the president, the athletic director and the alumni because they’re not used to winning Homecoming. To me, it’s just another win, but it feels a little more important when everyone is watching. They saw a nice, clean football game.”

Livingstone’s crowd was already in a festive mood when the Blue Bears got the party started. On their second possession, quarterback Xavier Longerbeam established both the run and the pass and capped an 87-yard drive with a short touchdown pass to running back Latrell Flowers. In the second quarter, Tyler Keene’s 26-yard field goal and Longerbeam’s last-minute touchdown pass to Spencer Ludin helped Livingstone take a 17-6 halftime lead — its first halftime advantage this season.

“It was the offensive line holding their blocks and holding the holes,” said junior running back Jarius Richardson. “They didn’t make any mistakes.”

That’s a nice tribute to the yeoman’s work of linemen Michael Green, Dhanny Dye, Jerrod Brown, William Odomes and Isaiah Murray, who seemingly imposed their will and dictated the game’s pace.

“There were a couple of mistakes by (Shaw), but that was just us taking care of the ball,” said Greene, a senior left tackle. “They couldn’t keep up with us, with our tempo.”

Livingstone finished with 356 total yards, including 193 on the ground. Richardson benefited the most, bumping and bruising his way for 117 yards and scoring his seventh TD of the fall on a 45-yard sprint early in the second half.

“That play was really wide open,” Richardson said after recording his third 100-yard rushing game. “The line opened the hole and held it. All I had to do was be patient. It felt like everybody was just on today.”

The visiting Bears were intercepted twice, lost a fumble and were penalized 11 times for 147 yards. “That’s a lack of discipline,” said first-year Shaw coach Adrian Jones. “We haven’t figured things out. We’d get positive yards and then go right back and shoot ourselves in the foot. We came in thinking we could win the football game, but you can’t win if you make mistakes and beat yourself.”

The Blue Bears know something about that — and perhaps that’s what made this performance so refreshing. It was a game that brimmed with small pleasures, including a second-period interception by Gregory Hines at the LC 19-yard line and another by Kameron Nightingale at the Livingstone 7, midway through the fourth quarter. Then there was the tag-team of linebacker DeMarcus Nolan and Williams, who forced and recovered a Shaw fumble in the third period.

“We got the push up front,” said Williams, a 5-foot-10 sophomore from Spartanburg, S.C. “Throw in a little quarterback rush and that’s what started the whole thing.”

And helped bring the Blue Bears back to life.

NOTES: Livingstone plays its last three regular-season games on the road, beginning next Saturday at Winston-Salem State. … Longerbeam, the red-shirt freshman from Panama City, Fla., earned his fourth straight start. He passed for 163 yards and two touchdowns, but was sacked three times. The Blue Bears converted three of four fourth-down chances and turned each of their three red-zone opportunities into points. … One of the fourth-down conversions was a 23-yard run by Kendall Robinson on a fake punt. … Linebacker Jarod Richardson was Livingstone’s leading tackler with nine. Shaw’s Dominique Hannibal, a 275-pound defensive end, was in on 18 tackles.

West Rowan’s balanced attack is too much for Mustangs