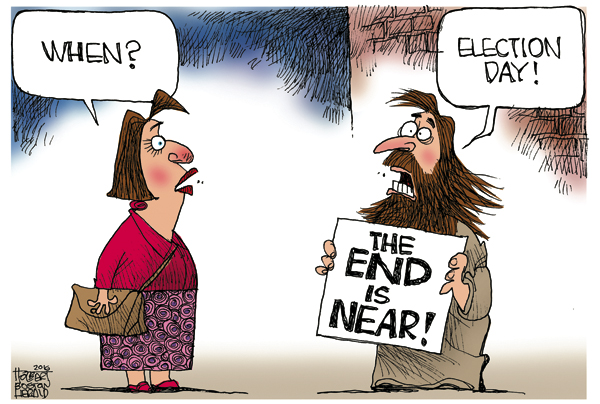 Jay Ambrose is an op-ed columnist for Tribune News Service. Readers may email him at speaktojay@aol.com.

Donald Trump is unshackled as well as unhinged. The tattletales on both sides of the political divide are uninhibited. Informative political discussion has been undone. Hillary Clinton remains unethical. The Republican Party is becoming unglued, and the United States could just maybe be on the brink of being politically unstable for years to come.

It has been a wild and crazy election year, and if its purpose was entertainment, sometimes of the X-rated variety, you could turn on the TV and smile. But what is really at stake, of course, is helping to afford the American people flourishing lives, which means discourse on real issues and having trustworthy candidates capable of carrying out reasonable policies in office.

For a polls-enhancing period, Trump was on good behavior, reading cautiously from a teleprompter and presenting arguments about economic growth and the like. Then came the story about his not paying taxes he did not owe. Next there was the tale about his calling a former Miss Universe “Miss Piggy,” causing him to spend days reviewing questionable portions of her life. And later came the video in which Trump talked about his stardom letting him get away with sexual groping.

More confirmative than revelatory, the 11-year-old video nevertheless had shock value. Some overwrought news outlets referred to it as evidence of “sexual assault,” votes were obviously swayed and many Republicans began disassociating themselves from Trump. He then announced he was reverting to his old style. He would unshackle himself from advisors who thought civilized behavior in his interest, declare civil war on other Republicans representing his only chance of winning the election and go super-nasty again.

Clinton benefits from all of this — her chances of losing get less every day — but it is not as if she’s an angel of wisdom and self-abnegation. Maybe she never called anyone a pig, but she did call millions of Americans racist, sexist, homophobic, xenophobic and Islamaphobic. Her husband Bill ruined women’s lives for the sake of sexual fun and he is her top surrogate on the campaign trail.

WikiLeaks is meanwhile having at her. This Julian Assange creation gathers information from hacking, maybe getting help from the Russians, and releases it to the public. There has been a lot coming out, such as speeches she gave to adored corporate donors, telling them on one occasion that her public views are not always the same as her private views.

In other words, when she curses fat cats, please understand that she secretly likes to scratch them behind the ears, too. She also once said she was for open borders, a position even more extreme than Trump’s wish for a Mexico border wall. New information shows coziness with the press, to its shame, and gives still more credence about pay-to-play misuse of the Clinton Foundation.

Her defenders have tried to deflect any damage by contending that the Russians are intervening in our politics, and nobody likes that. But people do like learning what politicians may do if elected, and a Clinton camp failure to say whether the information is true or false amounts to a confession it is true.

Trump keeps talking about jail for Clinton. That tells you a lot about him, as does his ignorance on just about everything. If you bother to add up Clinton’s policy ideas, the bottom line is less liberty for Americans and ruinous big government as a virtual deity. Let these dance with her lying ways and heaven help us.

The GOP is badly split and Republicans now seem less likely to win the Senate. One powerful hope for the future is Paul Ryan, hated by Trump because of his distancing himself from him, but someone who could return as speaker of a Republican House that will stymie the bad and abet the good.

Whatever happens on Nov. 8, we must aim to recuperate from this political year.

Jay Ambrose is an op-ed columnist for Tribune News Service. Readers may email him at speaktojay@aol.com.

My daughter has a birthday coming soon. As birthdays go, it’s a pretty big one. At least, it was for... read more