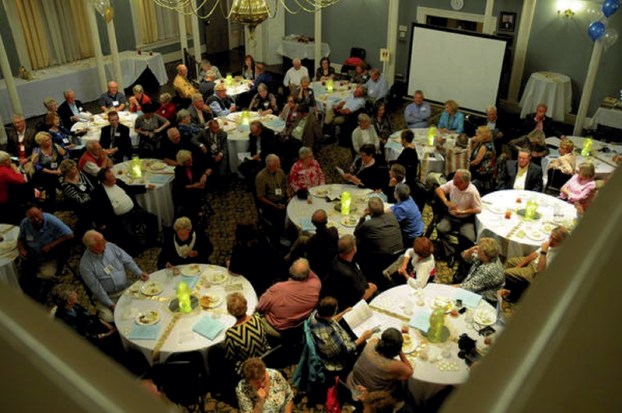 SALISBURY — It was called volunteer integration then. Carolyn Steele Snipes was a rising senior who was offered the chance to transfer from R.A. Clement, an all black school, to the all-white West Rowan High.

“When I signed up, I really didn’t think I was going to get to go,” Snipes says today. “I filled out the form. Mommy and Daddy signed it, but I didn’t believe I was going.”

It turned out Snipes’s transfer was accepted, along with eight other senior classmates from Clement. In all, 36 R.A. Clement School students covering the ninth to 12th grades, integrated West Rowan High for the 1965-66 school year.

“Charting the unknown gives you mixed feelings,” Snipes says. “I was leaving people I had been with 11 years. There were thoughts of  ‘Why did I do this?'”

Last Saturday, Snipes attended the 50th-year reunion of West Rowan High’s Class of 1966, a group of kids who came of age during a pretty turbulent time in the South and the United States as a whole.

Mixed in with the typical stuff — band practice, final exams, homecoming, prom, sports and clubs — were weightier things, such as integration and the Vietnam War.

“It was a special time in this country’s history,” says Jim Greene, who has an insurance business and is a Rowan County commissioner today.

Through it all, the West Rowan High students seemed to form close bonds, and many of these school friends remain in contact with each other a half century later. There’s a group that meets for lunch regularly at Mario’s and other local restaurants.

Another group of eight guys, including Greene, Wells Hall, Bill Watson, John Sloop, Ed Ellis, Howard Jones, Gary Pinkston and Jim Fero, have an annual golf outing. It’s been happening for close to 20 years, since the late Steve “Boomie” Kennedy recruited some of his 1966 classmates for a big golf outing to Scotland.

On that memorable trip, Watson says, the guys played 11 rounds of golf in seven days, walking 18 holes every time except once. The annual golf outings have been held regularly since 1998, and even though the rains from Hurricane Matthew washed out a Saturday tennis outing and last Friday night’s football game at West Rowan, the golfers rescheduled and played two glorious days — Sunday and Monday — at Rock Barn.

The official class reunion was held at the Rowan Museum. More than 100 people attended when spouses were counted in. “After this long,” Watson confided, “name tags really help.”

“That room was pretty crowded,” says Rosanna Moore, who decided she and her classmates shouldn’t call it their 50th reunion. Rather, their “Hurricane Reunion” seemed more fitting.

Moore knows she can’t be objective, but she thinks the Class of 1966 was special. It was filled with talented, bright people, she says, naming off the doctors, lawyers, writers, educators, pastors, businessmen, ranking military men and nurses.

“Our teachers liked us and thought we were a great class, and we thought we got a great education,” says Moore. “… There were a bunch of great personalities in that class.”

Hall, a longtime Charlotte attorney, was voted “Most Likely to Succeed” in 1966. He would go on to N.C. State University as an undergrad before heading off for Duke Law School.

Hall says part of the close bond his classmates felt and continue to have today might have come from growing up together in a rural community. Greene says the families who populated West Rowan High were working class folks — very few were really poor and very few were really rich.

It made for students who had a lot in common, “who enjoyed each other’s company and still do to this day,” Greene says.

“I think our class was fairly close,” says Watson, who was student body president his senior year.

Rural schools such as Mount Ulla, Cleveland, Woodleaf and Hurley fed into West. The kids were in 4-H together. They played Little League baseball against each other. Many attended the same churches.

Once they reached high school, the band and sports seemed to be a great melting pot, Watson says, but he knows he can’t speak for the experience of black students who joined the class from R.A. Clement School.

“Most of us were kind of naive about the whole thing,” Watson says.

Looking back, Carolyn Steele Snipes says she it was right for her to be one of the kids making integration at West Rowan High happen, and she has no regrets. She was a good student academically and a good athlete, who led Rowan County and the North Piedmont Conference in scoring as a basketball player.

She also played clarinet in the band. “I was solid,” Snipes says. “If not me, then who to go into a situation like that?”

Snipes says she did not confront too many “negative situations,” though 50 years later she’s learning more of some difficult times her fellow black classmates faced.

A turning point for Snipes came on the basketball team, when it was having a break during a tournament at the YMCA in Salisbury. She was sitting with her teammates in a restaurant when a manager said the establishment could serve the white players, but not Carolyn.

Laura Poteat, a white player on the team, told the manager they were a team and the restaurant would have to serve everyone on the team or no one.  The manager did not relent, and Laura said,  “Come on, girls, let’s go.”

Carolyn remembers Poteat had to say it twice before it sank in.

“That, to me, was very important,” Snipes says. “That was one of the good experiences I had.”

Snipes says her encounters with discrimination helped her when her own children faced different degrees of prejudice in their own lives.

Snipes went on to major in biology and minor in chemistry at Winston-Salem State University. She then became a longtime educator in Henderson and Durham schools.

“In the beginning, most of us just wanted to be part of the change,” Hogue says. “When it was time to go, a whole lot wanted to back out  — the fear of the unknown. We didn’t know if there would be rioting. We just didn’t know what was going to happen.”

Hogue acknowledges there was some crying and students who were scared, but in the end, “it was fairly uneventful,” she says. “I don’t recall any big fights or anything.”

When she looks back on her senior year, Hogue thinks fondly of certain teachers, her home economics class and the band. She was the only minority student in home economics class, and a white classmate named Tommy Kepley was kind to her, something she always appreciated.

Likewise, as she played the flute in the band, Jimmy Padgett became a friend.

“I think it was an experience that helped me later in life,” says Hogue, a nurse at the VA Medical Center, where she has been president of the union since 2006. “It helped me a whole lot because we’re all just people. We separate ourselves, which is not a good thing.”

Because she was worried her boyfriend would be drafted and heading off to Vietnam, Hogue married in her senior year. Her dream of being a registered nurse was put on hold for a long time while she and her husband raised three children.

It was more than 20 years after graduating from West Rowan High that Hogue earned her associate and bachelor’s degrees in nursing. She and her husband of 50 years now have eight grandchildren.

“We broke ground,” Hogue says of those kids from R.A. Clement who integrated West Rowan High in 1965. “We showed people it could be done and it didn’t have to be bad.”

The guys graduating high school sometimes received deferments by attending college, but they all became subject to lottery numbers and the draft. The lower your number, the more likely you would be called into military service, which often led to the controversial war in Vietnam.

Greene’s lottery number for his birthdate was “13.” He ended up joining the Army Reserve for 10 years — the 991st Transportation Co. out of Salisbury — but he would have friends who came back from the war wounded or dead.

Watson went on to be a chemical engineering major at Clemson University, where he was required to certify to the draft board each year that he was completing 25 percent of the credits required in his curriculum.

“The Vietnam War was a big study motivator,” says Watson, who was eventually drafted anyway, serving 18 months in the Army. Union Carbide held his job in New Orleans and it was ready for him when his Army stint was over.

Still living in Louisiana, Watson came the farthest distance to the reunion. He, Greene and others often share stories of their high school days playing football for Coach Doug Chalk.

“Doug was just a special person who truly was interested in us,” Greene says.

The 1966-67 school year was the last one for R.A. Clement School before full integration took place. Not long after she graduated from West Rowan High, Essie Deese Hogue went to the U-Stop-In in Cooleemee, a place that served some of the best hot dogs.

“I always had to go to the back to get a sandwich,” Hogue says, recalling that particular day. “I said, ‘I’m not going to the back anymore. I’m going inside to order my food.'”

When Essie walked in the front restaurant door, the white customers and staff looked up and stopped talking. Hogue sat down at the counter and said she would like to order something to carry out.

After a pause, the waitress at the counter said, “OK, what would you like?”

Hogue knows it was a small victory, but she never went to the back door again.

By Shavonne Walker shavonne.walker@salisburypost.com SALISBURY — In the early 1990s, the veterans at the Hudson-Miller-Tatum VFW Post 3006 were working... read more