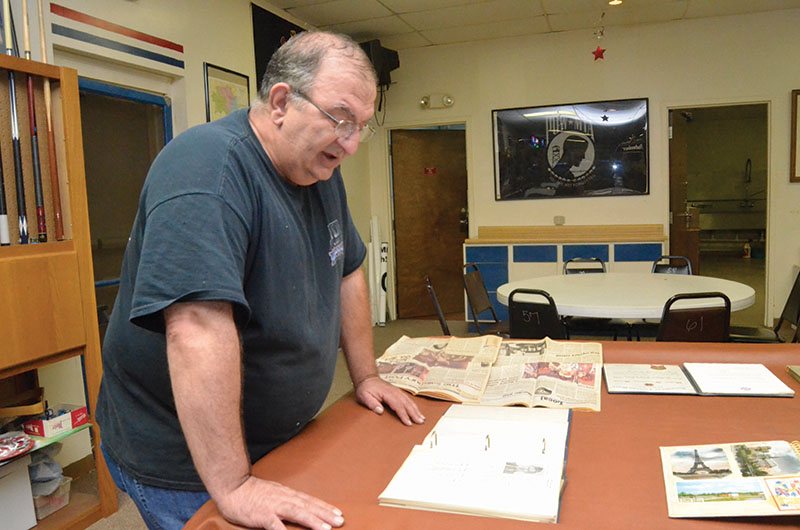 Jim Fox, post commander of Miller-Hudson-Tatum VFW Post 3006, has been pouring through old photo albums and closets searching for any history of the post, which will celebrate its 75th anniversary later this month. The Post is located on Brenner Avenue. Shavonne Walker/Salisbury Post

SALISBURY — In the early 1990s, the veterans at the Hudson-Miller-Tatum VFW Post 3006 were working to solve a mystery — the mystery of the organizations’ namesake. The Post was started Oct. 22, 1941, as the Hudson VFW Post. Later this month, the members will celebrate the Post’s 75th anniversary.

The event will take place Saturday, Oct. 22, from 11 a.m. to 5 p.m. and will also include activities for family and children, food and informational tables from area veterans’ organizations and political candidates.

“We want the community to help us celebrate the anniversary and find a way we can work with the community better,” said current Post Commander Jim Fox.

All veterans of any war and their families are invited to the anniversary celebration event.

He said there will be bounce houses for the children, hot dogs and other food and political candidates are invited to talk to the veterans and share their various platforms.

The veterans had always known who the Post was originally named after — Alexander “Happy” Hudson, a WWI veteran who was aptly nicknamed because of his surprising optimism despite suffering wounds during the war.

Sometime around 1944 or 1945, the Post changed its name to Hudson-Miller, but in the decades after no one could recall who Miller was, Fox said.

Fox said they’d had a picture of a man whose last name was Miller. After some research and a 1945 newspaper article, the mystery was solved. The name change was to honor Pfc. Charles Henry Miller, a VFW member killed in war during an explosion in the Philippines.

Tatum was added between October 1945 and March 1946 for Dr. Walter Tatum, a well-known Rowan County physician and county coroner. Tatum was in charge of field hospitals in WWII in Alaska. Buddy Kyles and Jim Arnold are shown in this 1991 photo with pictures of the founding members of the Hudson-Miller-Tatum Veterans of Foreign Wars Post 3006. The Post is celebrating its 75th anniversary later this month. File photo by Wayne Hinshaw

In 2002, the Post received a 1966 Huey helicopter that saw service in Vietnam. It was reconditioned to resemble its appearance in Vietnam.

Fox said over the years the membership has dwindled from around 500 to 200 or 250, so this event is also a way to draw interest from area veterans.

He said they would like to be able to provide the veterans, both of wars past and those who’ve served early 1990s with the Gulf War and the early 2000s in Iraq or Afghanistan and any wars in between, with referrals to other organizations.

“We want to reach out to help those that need our help,” Fox said.

Fox said they especially want to extend an invitation to the descendants of the namesake of the Post.

He said the WWII, Vietnam and Korean veterans are dying and they want the younger veterans to know “we can help them help themselves.”

The Post wants to be a support system for the younger veterans and their families. He pointed to the suicide rate, number of homeless veterans and divorce rate among veterans climbing.

“We want to be able to do things to help not only the community, but the veterans,” Fox said.