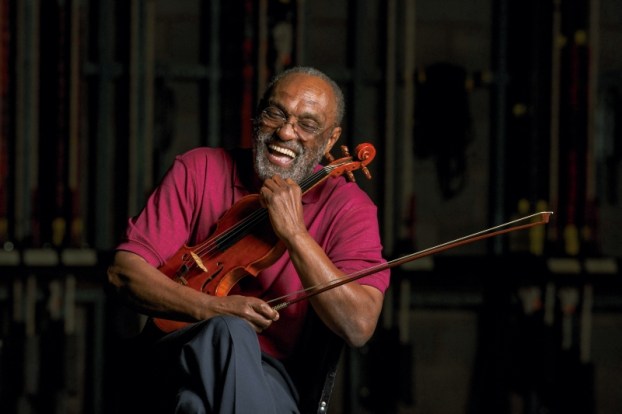 JON C. LAKEY / SALISBURY POST The Salisbury Symphony is celebrating its 50th Anniversary with the 2016-2017 season. Violinist Leroy Sellers has been playing with the symphony ever since the beginning.

Ode to joy: Violinist Leroy Sellers has been playing with Salisbury Symphony for 50 years

Leroy Sellers sits alone on the darkened stage at Keppel Auditorium. He’s holding a violin, and he’s shaking his head and smiling.

“It passes by so quickly,” he says, chuckling.

Sellers has been part of the Salisbury Symphony’s 50-year history — all 50 years. Maestro David Hagy noted recently that the symphony had played some 231 performances over the decades.

That’s a lot of music, but Sellers is quick with an answer when asked to name his favorite composer: Beethoven.

“We played Beethoven’s Ninth Symphony,” Sellers says. “That was a joy to play. I played that last movement at my mom’s funeral.”

Indeed, Sellers has been playing with joy for 70 years.

But the instruments were not of the same quality, Sellers says. They often got cast-offs from the white schools.

“We repaired instruments,” he says. “We’d patch them up and make them playable.”

Sellers was the oldest of three boys, and one of his brothers played violin.

“When the teacher came over to teach my brother, I played too,” Sellers says.

The woman had been a strings teacher in New York, and loved Southern cooking. So Sellers’ grandmother would cook for the woman, bartering food for violin lessons for her grandsons.

Sellers’ father was a tire recapper, and his mother worked for the Fly-Back Co., which made paddle balls.

The family lived in a working-class black neighborhood. The house had no lights, no hot water, and the family cooked on a wood stove. There were holes in the floor, Sellers says. “You couldn’t do any better. You couldn’t move to a white neighborhood.”

Sellers thinks his dad made it to third grade. His mother finished seventh grade.

“Because of what was happening in the colored community, as it was called at the time, Mother and Dad said the only way out was education. They did everything they could to make sure we had education. School was important. You had to have discipline.”

One of Sellers’ brothers was a professional violinist; the other, a professional drummer in New York City. Sellers received a master’s degree in music education from the University of Connecticut.

Sellers’ first teaching job was in Mobile, Ala. He arrived in September 1960, and he had to buy a car. He was riding with a car salesman to test drive a Dodge Rambler when a woman hit them.

Even though Sellers was a passenger in the car, and the salesman was not at fault, the police officer told Sellers, “N—–, I’ll put you so far under the jail you won’t ever get out.”

Sellers stops a moment and considers the memory. You can look into his eyes and tell he’s back in that car again. Then he smiles and shakes his head.

“It was crazy. They burned a cross on the street when I was growing up.”

He stops again for a moment. Smiles again.

“I just want to talk about being a music teacher.”

September of 1960 found Sellers as an itinerant music teacher. He worked in six or seven elementary schools. He struck up a friendship with the arts director, Dr. Broadus, a white man.

“I will never forget his name,” Sellers says. “Nice fella.”

The man told him to come and see him for anything he needed. Sellers formed an all-black city orchestra, and Broadus attended every concert.

He was asked to play with the Mobile Symphony. But his supervisor, a black woman, said to him, “Don’t do that. They’ll think you’re starting something.”

Sellers stayed in Mobile for one year, then moved to Charlotte, where he’s been ever since. He and his wife, Dorothy, live in Harrisburg.

When Sellers started work in Charlotte, integration had begun. There were no incidents at his school, he said. “But the high school kids were smart. They found out if they could start something, they could go home. But it wasn’t about integration. They just wanted to go home!”

He met Samuel C. Davis, a cellist from Salisbury. The two of them were asked to play with the Charlotte Symphony. The conductor had to talk with the board. They agreed, and likewise, the musicians all agreed.

“There was an older white man, a cello player, who said he would never play beside a colored man,” Sellers says. “He didn’t because he died before the season began.”

But the night of the first rehearsal, he says, “Everybody came to us and welcomed us to the symphony.”

Because Sellers and Davis had played at the installation of Dr. Samuel Duncan, Livingstone College’s president, they were invited by Dr. Albert Chaffoo to play in the Salisbury Symphony in 1967. The year before, Duncan had approached Catawba’s president, Dr. Donald Dearborn, about the idea of forming a symphony. Again, Sellers and Davis were welcomed by their colleagues.

Linda Jones, the symphony’s executive director, notes that the symphony typically numbers about 70, depending on its needs for each concert. Of that number, usually 5 players are black.

The symphony absolutely wants to increase that number, Jones says. “That’s why we go to Livingstone every year. That was how the symphony began.”

Still, Sellers says, “This audience goes out of its way to make sure I’m welcome. The kids don’t understand about the old stuff.”

The “kids,” to which he refers are not only black youth, but his symphony colleagues. He, Dr. Ron Smith, a fellow violinist, and John Kolpitke, who plays viola, are the group’s elder statesmen. Again, he chuckles. But he’s clearly energized by the opportunity to perform with younger players.

Sellers retired about four years ago from the Western Piedmont Symphony. Over the years, he’s played with the symphonies in Savannah and Asheville, and in South Carolina cities of Greenville, Florence and Augusta.

“He was a great fella,” Sellers says, “but you really didn’t get a chance to spend a lot of time with him.”

About eight years ago, Sellers taught for two weeks in Pretoria, South Africa, one of three musicians sent by The Juilliard School in New York City. He taught in the building in which Mandela was inaugurated, in a building where no blacks were once allowed.

“Those kids did not want a break,” he remembers. “I found out later that some of them had been walking since 5:30 that morning to get there.”

In the years before Hagy arrived, Sellers says, “the symphony just moped along.” A couple of conductors only stayed a short time, providing no continuity for personnel.

“When David came here, this symphony took wing,” Sellers says. “He brought in better musicians and got more support from the board. There may be conductors who are flashier, but they couldn’t do a better job. In terms of being qualified and knowing his stuff, you’re not going to get any better. He’s a great person to work with, and the musicians like to play for him. It just keeps getting better.”

Hagy and Sellers have developed a professional and personal relationship over the years. They served as one another’s sounding boards when their mothers were ill.

“It gave us a chance to bounce ideas off each other, but with a little humor, too,” Hagy says.

Hagy says that many of the orchestra members were surprised when he introduced Sellers at the season’s first concert as having played for the symphony’s entire history.

“He doesn’t in any way flaunt it,” Hagy says. “He has been a stalwart civil rights leader in many organizations. Leroy has been steadily connected all this time. He drives in from Harrisburg, and that’s a true sign of commitment.”

Like Hagy, Sellers is an ardent supporter of arts in the public schools. He gives free lessons now, and encourages younger players however he can.

“Leroy has that special ability to be fresh and new while carrying the history and background of the Salisbury Symphony with him,” Jones says. “While he is an excellent professional musician, he is also loved and respected by his students for his exceptional teaching ability. The Salisbury Symphony is lucky to include him in our strings section all these 50 years.”

When he’s not playing, you can typically find Sellers taking pictures. During the interview, he gets into a long conversation with Post photographer Jon Lakey about cameras, lenses and equipment.

Before that, however, he’s asked to play. He chuckles, one last time, then puts the bow to his violin and plays a haunting melody, the notes floating above the darkened stage.

SALISBURY — It was called volunteer integration then. Carolyn Steele Snipes was a rising senior who was offered the chance... read more