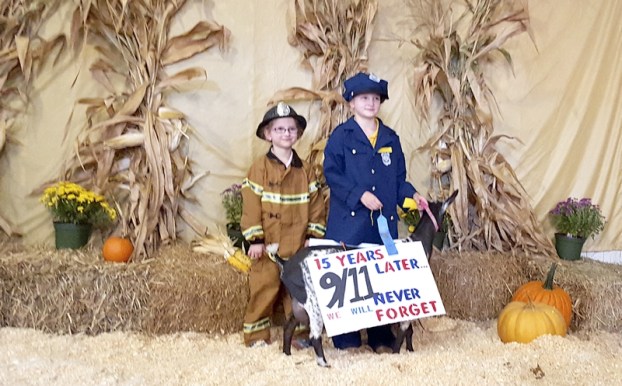 Cooperative Extension Grayce and Katlyn Moore showed their support for our 9-11 heros in the Dairy Goat Dress Up Show at the Rowan County Fair.

Morgan Watts: Livestock shows at the fair were a blast

The Rowan County Fair has come and gone for another year, but boy, was it one to remember. With over 500 head of livestock being shown in a week’s time, it was busy but worth it.

All of these kids’ hard work paid off. We definitely have a great group of livestock kids in Rowan County. No fair would be complete without a little recognition for all of their hard work. Below are some placing and highlights of the fair for the livestock shows.

The Dairy Goat show kicked off the fair. We had close to 200 dairy goats shown. We started with showmanship. We had a peewee, junior, intermediate and senior division. Winning those divisions, respectively, was Austin Seitz, Madison Seitz, Maddie Noble and Casey Bright. We also had a dress-up/costume division.

The next round of shows was the Breeding Ewe, Market Goat and Market Lamb. We had more than 150 animals exhibited for this show. Winning Supreme ewe in the ewe show was Lydia Wilson, and Winning Reserve Supreme ewe was Matthew Connolly. Cooperative Extension Jonathan Luther and Coby Kivet display their showmanship skills in the Supreme Showmanship division of the Dairy Show at the Rowan County Fair.

The last show of the fair was the Dairy Cattle show. We had close to 150 head exhibited. La Foster Farms from here in Rowan County had Supreme Champion and Reserve Supreme Champion. In the costume/dress-up division, winners were Owen and Ansley Hoffner with their “milk rolls like the tide” costume and Katie Hoffner with her “Ms. Dianna gets married to milks” costume.

Even though it was a long and tiring week, the fair was a blast and I can’t wait for next year! Congratulations to all of the winners and participants.

By Amy-Lynn Albertson Rowan County Extension Director Managing your forestland can be an excellent long-term investment. Over the years, income... read more