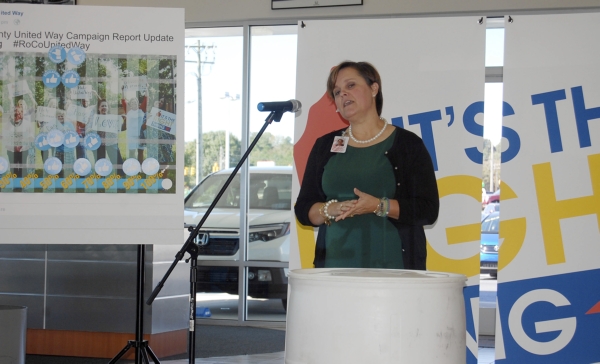 Amanda Raymond/Salisbury Post Katherine Bryant, principal of North Rowan Elementary School, shared her story surviving of domestic abuse to encourage the community to give to the Rowan County United Way's campaign. So far, about 65 percent of the $1.5 million goal has been raised.

SALISBURY — Penny Greer-Link, campaign chair for the Rowan County United Way, set a goal for this point of the campaign and the divisions met it.

The United Way’s annual campaign has raised about $975,554, which is almost 65 percent of its $1.5 million goal, as reported at Wednesday’s report meeting at Gerry Wood Honda.

The divisions raised about 31 percent by the first report meeting, and Greer-Link tasked them with raising 60 percent or more by this one.

For the next meeting, Greer-Link challenged the divisions to raise at least 90 percent of the goal.

“Some of you think we’re going to have a hard time doing that,” she said, “because we know that we start out of the gate fast and we know we pick up speed, but then what happens? We slow down.”

Greer-Link said the agencies need the community to dig deep.

“They don’t care how much you give, they just care that you give. That’s what matters,” she said.

The chairmans, commercial 1 and special gifts divisions all exceeded the 60 percent goal, with many other divisions close behind.

One way more funds are being raised is through a partnership with Belk. The United Way supported agencies are selling $10 tickets for early admission to Belk’s annual charity sale.

On Oct. 30, a week earlier than the regular sale, ticket holders will be able to shop for items with 20-70 percent lower prices. There will also be music from a Dixieland band, wine and sweets.

The event is closed to the public and only those with tickets will be allowed to enter. Those who buy tickets will also get a $5 off coupon.

One of the agencies the United Way helps support is the Family Crisis Council of Rowan County. The organization assists individuals who have experienced family violence and sexual assault.

“The scars and all that heals, the bruises go away, but you see, what was the hardest part are the invisible scars, the emotional (scars),” she said.

She said she was living in Winston-Salem at the time, so she went to Safe on Seven, the Forsyth County domestic violence center.

“There they introduced me to legal aid and family crisis,” she said. “And to this day I believe in that because they helped me with the emotional part, not only for me but for my children.”

Bryant said tragedy can strike anyone, so it is important to support the agencies that help.

“You’re talking to an upper middle class, educated woman, and it happened. Domestic violence happens. … It can happen to anyone,” she said.

Renee Bradshaw, executive director of the Family Crisis Center, said the organization gets 25 percent of its budget from the United Way.

The next report meeting will be on Oct. 26 at Team Chevrolet at 404 Jake Alexander Blvd. S. at noon.