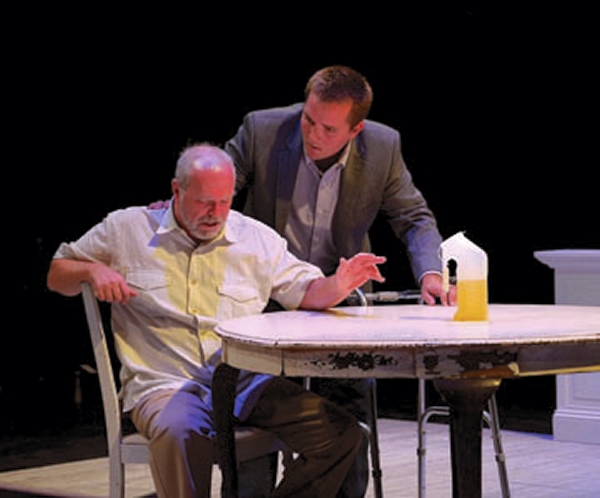 The script is written by Jeffrey Hatcher and Mitch Albom, based on Albom’s best-selling book. Lee Street theatre’s production is directed by Brian Daye and sponsored by Cloninger Ford.

“Tuesdays with Morrie” is the autobiographical story of Mitch, a journalist driven solely by his career, and Morrie, his former college professor. Sixteen years after graduation, Mitch happens to catch Morrie’s appearance on a television news program and learns that his old professor is battling Lou Gehrig’s Disease. Mitch is reunited with Morrie, and what starts as a simple visit becomes a weekly pilgrimage and one last class in the meaning of life.

“I remember reading the book many years ago and recalled what a touching story it was,” says Bob Paolino, who plays Morrie. “The challenges with Morrie are simply the fact that he is dying of ALS … so I want to keep it as real as possible without over emphasizing or over simplifying.”

Daye’s work has been seen at Lee Street theatre before. He co-wrote and directed “Voices from the Margin” in 2014 and appeared as Hoke Coleburn in “Driving Miss Daisy.” He calls the script a beautiful story that he is thrilled to be working on. “I hope the audience comes away with an understanding of how men at various stages of their lives can come together and give to each other without being concerned with pride or masculinity,” Daye says.

“The relationship and the reigniting of who these men are as human beings is what’s key to enjoying ‘Tuesdays.’”

And what has Paolino learned in his lessons with Morrie? “We should always be ‘human,’” he says, “with all the frailties and sensibilities that that entails, and remember to always forgive: ‘forgive everybody everything.’ After all, ‘without love, we are birds with broken wings.’”