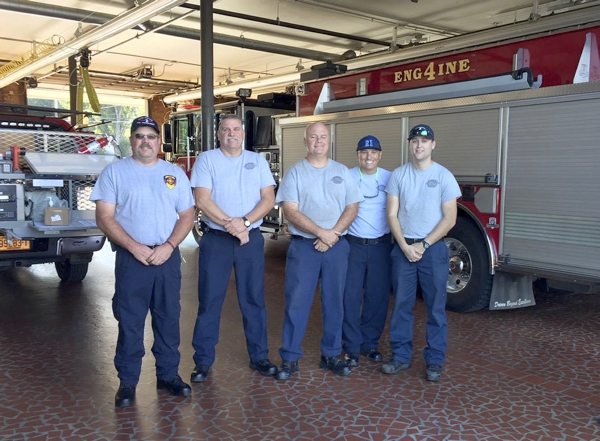 Salisbury and Locke fire departments have each sent fire crews to Allenton, just outside of Lumberton in Robeson County, to help that town’s fire district. The Rowan County Salvation Army has sent two volunteers to Goldsboro to provide daily meals.

A Salisbury crew of four and one driver from Locke Fire Department left Tuesday afternoon for the 130-mile trip.

He said the request came from the state office of emergency management. He said the men who went will start by removing trees so they can open up the roadway and then provide any needed fire services.

The firefighters took with them all the supplies they may need while there, including bottled water, a generator and fire/rescue tools.

If needed, another crew is on standby to respond, Morris said.

The state is still monitoring and expected some rivers to crest late Wednesday or today.

“Our thoughts and prayers are with the people of Lumberton,” Morris said.

Locke Fire Department sent not only McKnight, but its pumper tanker, which holds 2,500 gallons of water.

Locke Fire Chief Rusty Alexander said the water system is out in Allenton and they had a need for large tanker trucks that could haul water if needed.

The truck can act as a primary response apparatus or be used to haul water, Alexander said.

“It means a lot,” he said of helping a fellow fire department.

Alexander said a number of Locke firefighters wanted to go, but work commitments prevented them from volunteering. McKnight is full time with Locke and another part-time firefighter has moved up to fill in while he’s gone.

Another firefighter, Tim Sipes, volunteers with Locke and was deployed with a station in Union County.

“It shows how well the fire services in Rowan County work together to make one crew,” Alexander said of the joint department response.

He said he hopes that perhaps the local firefighters can help provide relief to the Allenton firefighters, even if it’s so they can get some needed rest or check on their own families and property.

The Salisbury area Salvation Army is also sending help. The local agency received a call from the Salvation Army’s divisional headquarters for the North and South Carolina division asking if Salisbury could help with the recovery, said Salisbury Capt. Bobby Carr.

Carr said within two hours of being asked to go, Daisy and Melissa Cline had to make arrangements for their spouses and children and found someone to cover their daily tasks. The two loaded a van and headed for Goldsboro.

He said the women are assigned to help prepare and serve meals to those displaced by flooding at Carver Heights Elementary School, where they will serve over 600 meals a day.

The pair will also help with loading and preparing the mobile feeding unit, which can serve more than 1,000 meals daily. The two will be deployed for 14 days, Carr said, unless operations cease earlier.

Daisy and Melissa served last year in Georgetown, S.C., after flooding there.

“They enjoy serving others and they also pray and minister to people that are heartbroken during their time serving in the recovery,” Carr said.

This very deployment is a calling for both women and both have said they feel blessed to be able to serve others.