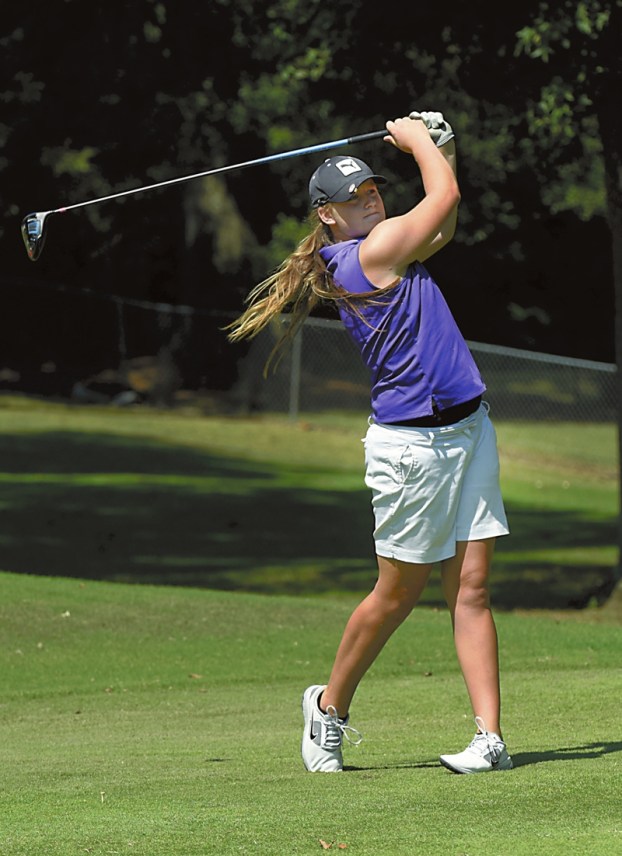 Furr did just that, shooting an 81, but her effort also paved the way for Carson’s first-ever county team championship. The Cougars got surprising scores from freshmen Kaiya Addison and Sophia Brown to defeat East Rowan for the championship, 297-306.

Carson’s title came as a surprise since on Tuesday at Warrior Golf Club, East defeated the Cougars by 24 strokes in the SPC event, but Brown did not play. The Mustangs were third that day behind Cox Mill and Hickory Ridge while Carson was fifth.

“It’s great to win that first county golf championship for Carson,” said Cougars’ coach Ryan Chandler. “Micah played very well today even though I know she wasn’t happy with her finish. But 81 is still a solid score and with regionals on Monday, we’re looking for her to qualify for the state tournament for a fourth time. It’s been fun to coach her for these four years.”

While Furr gave Carson a great cushion by finishing 17 strokes ahead of anyone else, Chandler acknowledged that Addison and Brown made winning the title a reality.

“Yes, the other girls played well too,” said Chandler. “Kaiya was seven strokes better than she was on Tuesday Sophia was a huge factor as well with a 110. One thing that I’ve stressed a lot — just get better every day — and they have. I’m really pleased to have three of the four coming back next year.”

Furr, who teamed with Allison Adams to win the prestigious Crowder-Dorsett Labor Day tournament last month at the Country Club, said that she felt more pressure then than she did yesterday.

“There was a lot more pressure at the Labor Day, because I didn’t want to be the one who ended Allison’s streak,” said Furr, speaking of Adams’ previous titles with Grace Yatawara as her partner.

“Based on the conference tournament the other day, I knew that I was the favorite (Thursday) but I didn’t take anything for granted,” Furr  continued. “Someone could have a great day and sneak up on me, so I just tried to play myself and the course and tried to break 80.”

Furr had a 41 on the front nine but a bogey-bogey-double bogey finish put her at 81 yesterday, well ahead of second place — East Rowan’s Carmen Fraley, a sophomore who shot a 98.

“Winning the team championship for Carson is really cool,” added Furr. “I’m so proud of my teammates. Sophia’s scores have been coming down almost each time out and Kaiya has so much potential if she works hard.”

Furr also shot an 81 on Tuesday and was runner-up in the SPC Tournament to Cox Mill’s Jaidan Rubinstein’s 80. However, by stroke average for the year, Furr was still the SPC’s top player.

Fraley is a first-year golfer, not just on the East team, but a beginner, period. According to her father, Bill, Carmen gave up travel team softball and dove right into golf. She still plans to play softball for the Mustangs next Spring.

“This is Carmen’s first year playing golf and she has come a long way in five months,” said East coach Rhett Teems. “She works at it every day. She is out playing rounds and tries to go see courses before we play them — little things like that which serious golfers do. She wants to be great.”

Teems is also excited about the future with Fraley and two other returnees, Hailey Fesperman and Camryn Corriher. All three earned all-county honors on Thursday, along with senior Micah Loper.

“It was sort of Carson’s year, with Micah Furr being a senior, but East is looking at big things for the next two years,” added Teems. “With Carmen, Hailey and Camryn, we have a good chance to win this thing next year.”

At this time, Furr is saying that golf in college is probably not an option as she hopes to attend N.C. State for academics. After the upcoming regional and state tournaments, Furr will focus on basketball as a returning member of the Cougars’ squad.