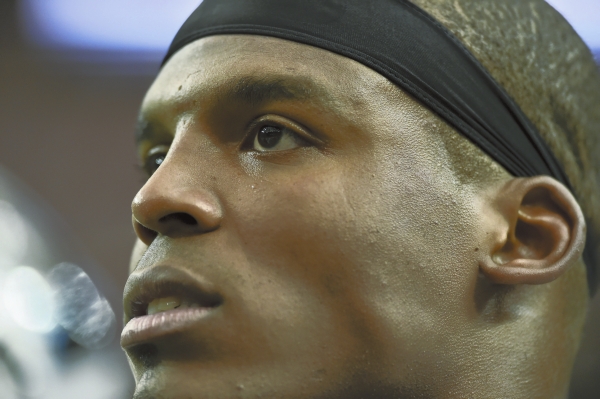 CHARLOTTE (AP) — Panthers quarterback Cam Newton returned to practice Wednesday, although it remains unclear if the league’s MVP will play Sunday against the New Orleans Saints.

Newton took reps with the first-team offense after missing Monday night’s game against Tampa Bay with a concussion.

Panthers coach Ron Rivera said Newton remains in the league’s concussion protocol and it’s too early to know his status for this week’s game at the Superdome.

“He looked good and threw the ball pretty doggone well,” Rivera said. “He was involved in the plays that we had scripted for him and handled those very well.”

Rivera said now the team is waiting “with bated breath” to find out how Newton responds on Thursday when he reports to work following his first day of practice in nearly two weeks.

“It’s all part of the concussion protocol,” Rivera said.

Newton, who usually talks publicly on Wednesdays, was not available after practice.

Wearing a helmet and his red No. 1 practice jersey, Newton threw passes and joked with teammates in the huddle before taking snaps during the first 20 minutes of action that were open to the media. Newton threw the ball around and jogged during the half-speed portion of practice.

Carolina (1-4) is marred in a three-game losing streak.

But teammates said Newton’s return — and the energy he brings with him to work — gave everyone a lift.

“Having the MVP back in your offense is a big deal,” All-Pro center Ryan Kalil said. “It’s tough especially the way that he’s not been around here with the head injury. So anytime someone like that is able to come back you are very excited.”

Added tight end Greg Olsen: “I think it was a good step for him. It’s good to see him back and feeling good. Obviously we know how important he is to this team.”

Panthers running back Jonathan Stewart, who has missed the last three games with a hamstring injury, also was back at practice on a limited basis. Like Newton, it’s still too early in the week to know if he will play this week.

Newton has struggled in his four starts, completing just 57.9 percent of his passes with six touchdowns and five interceptions. His quarterback rating of 80.2 ranks 32nd in the league.

However, he has played well in the past against the Saints.

Last season Newton completed 48 of 72 passes for 646 yards and seven touchdowns with only one interception in two wins against New Orleans. He threw five touchdowns in a 41-38 win at the Superdome in 2015.

“We’re not preparing for anybody but Cam,” Saints said Kenny Vaccaro said Wednesday. “When you get a concussion and you practice, how many times are you out the next day? Never. It’s not like it’s a lingering issue where it’s an ankle where they tried to let him practice. If you’re cleared from a concussion, you’re cleared.”

Vaccarro said he doesn’t anticipate Newton will be more tentative if he plays Sunday.

“I think he’s such a competitor that it’s not going to change much,” Vaccaro said. “… He’s not going to be sitting there like Peyton Manning or Tom Brady in the pocket; I don’t believe that. He’ll still be trying to score touchdowns just like he always does.”

Newton has only missed three starts during his six-year NFL career.

He was knocked out of the fourth quarter of Carolina’s Week 4 loss to the Atlanta Falcons when he slowed down on a 2-point conversion run and was hit near the goal line by linebacker Deion Jones.

Rivera said Newton told him he never saw Jones coming from the outside until it was too late.

If Newton is unable to play Sunday, the Panthers will again turn to Derek Anderson. The 33-year-old Anderson started against the Buccaneers and had three turnovers in a 17-14 loss, including a costly turnover on a first-and-2 at the Bucs 2-yard line in the fourth quarter.

Brett Martel in New Orleans contributed to this report.

By Mike Duprez Lexington Dispatch LEXINGTON — Sometimes the ball doesn’t — or does depending on what side you’re on... read more