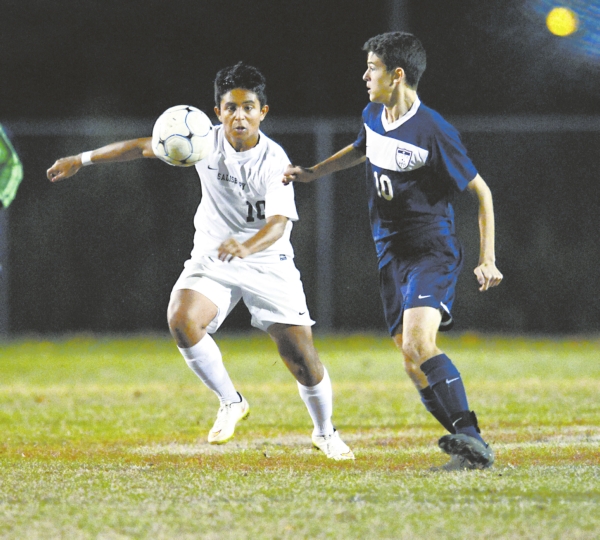 LEXINGTON — Sometimes the ball doesn’t — or does depending on what side you’re on — bounce your way.

Salisbury’s Melvin Bonilla scored into an empty net with 46.8 seconds left in the first overtime period as the Hornets dealt Lexington a heartbreaking, 3-2 loss in a battle for first place in the Central Carolina Conference on Wednesday night at Philpott Memorial Stadium.

Lexington goalkeeper Marc Anderson came out of the net to try and snag a ball sent in by Salisbury’s Luke Holland. But the ball bounced over Anderson’s head and Bonilla, as he was going down, booted the ball into the empty net to give Salisbury the lead.

“I think he got a little awkward in the air and couldn’t get his hands on it,” said Lexington coach Tim DeZego. “Unfortunately, that one bit us. That was a tough one to lose on.”

The teams played a scoreless second overtime period, leaving Salisbury the victor and on a clear path to what would be its 13th consecutive CCC championship.

Given that Lexington (10-6-3 overall, 3-1-1 CCC) played Salisbury to a storm-shortened 2-2 tie on Sept. 26 in Salisbury, the Yellow Jackets are right up there with the Hornets.

“Another tough loss, man,” DeZego said. “I’ll tell you, I thought this could be the year we knock them off. But they always bring a good team. They always come out strong. They had just enough to get us tonight.”

Salisbury coach Matt Parrish, whose team is now 12-2-4 overall and 5-0-1 in the CCC, pretty much agreed.

“Let’s just say the last time we played them, it left a bad taste in our mouth,” Parrish said. “I thought we had the game secured and we got a little tentative. We got back in our heels. And Lexington just brought the house and we had no answer for them. In fact, if that game doesn’t get rained out, I would argue they would have won that match.

“And I challenged our guys tonight to not have a repeat of that performance again. Then it was 1-0, 1-1, 2-1, then 2-2. At the end of the first overtime session, I said, look, ‘this is the last time the game is going to be level.’ After this, we’re holding on to this lead. We were not going to fold. … Two very evenly matched teams. Somebody had to win and somebody had to lose. It was one heck of a game.”

Tony Figueroa scored two goals for the Hornets, the first one off a rebound with 23:55 left in the first half after Anderson saved Andrew Kalogeromitros’ direct kick.

Lexington got the equalizer with 47.3 seconds left in the first half. Preston Shoaf ran around to the left of Amiel Cervantes, who then played a through ball in the 18-yard box. Shoaf directed it into the back of the net for his team-leading 19th goal of the season.

The Hornets reclaimed the lead at 2-1 with 28:59 left in the game when Figueroa shot past several Lexington defenders and redirected Santiago Caballero’s cross past Anderson.

Lexington once again produced some late magic when Shoaf sent a very long through ball to JR Ruiz down the right side. Ruiz got fouled in the box, earning a penalty kick with 1:29 left in regulation. Ruiz took the shot and scored near post past Salisbury keeper Jack Fisher to make it a 2-2 game.

Mike Duprez can be reached at sports@the-dispatch.com. Follow Mike on Twitter@LexDispatch_md.