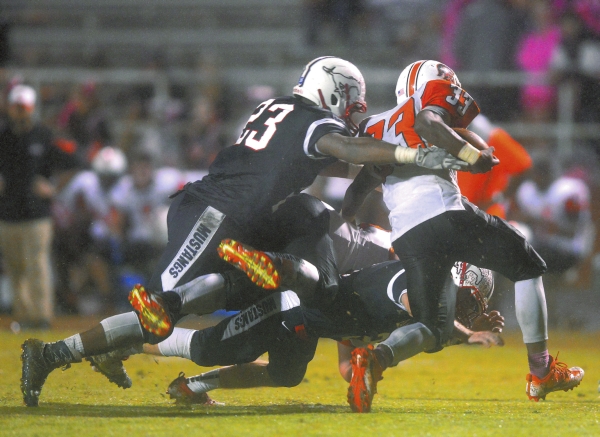 Prep football notebook …
Davie County is off to a 7-1 start for the first time since 2006 and is 3-0 in the Central Piedmont Conference for the first time since 2004, but a breakout season took an unexpected turn on Wednesday when Devore Holman resigned as head coach.
Holman resigned for “personal reasons.” He’s expected to remain at Davie in his role as an in-school suspension teacher. No other details were available on Wednesday evening.
Holman is a 1984 Davie graduate and is a nephew of the late Baxter Holman, head coach at Livingstone College during some glory days in the 1970s.
Tim Devericks will take over as interim head coach of the War Eagles.
Davie was 4-7, 6-6 and 5-7 in Holman’s first three seasons as head coach after 14 seasons as defensive coordinator, but the War Eagles are in the middle of a five-game winning streak since losing to No. 1 Greensboro Dudley.
•••
Davie plays North Davidson in its homecoming game on Friday in Mocksville.
•••
Through eight games last season, Davie had surrendered 269 points. This season, Davie has allowed 96 and has held three straight CPC opponents under 10.
Davie got double-figure tackles from James Boyle, Cody Hendrix, Broc Barnette and Spencer Wilson in Friday’s 20-3 win at West Forsyth. Boyle had 16 stops.

South Rowan
Austin Chrismon rushed for 164 yards on 27 carries in Friday’s 19-16 win against Carson that ended a lot of streaks, including a six-game skid against Carson.
It was the most rushing yards in a game for a South QB since Mark McDaniel, who went on to star at Catawba as a cornerback, rolled for 200 yards on 12 carries in a 2010 win against Central Cabarrus.
South has had nine 100-yard rushing games from quarterbacks in the last 20 years, with Blake Houston accounting for four in the 2008 and 2009 seasons. McDaniel had three in 2010. Hoke Shirley had one in a playoff win against McDowell in 2003. That performance by Shirley keyed South’s most recent playoff victory.
Chrismon’s previous career high for rushing yards was 77 in the one-point loss to Northwest Cabarrus earlier this season.
•••
South had, by far, its best rushing game of the season against Carson with 260 yards. It was the most rushing yards for the Raiders since they plowed East Rowan for 296 yards in the upset win that finished South’s 2014 season.
Coaches said that South (1-6, 14 SPC) kept the ball so long on a 19-play march at the start of the third quarter that South’s defense, which had just gotten loose at halftime, had to start warming up again.
“It was all really good to see,” South coach Daniel Yow said. “That’s the kind of team we can be, and we can do that consistently if we put our minds to doing it. We aren’t a big-play offense. We don’t have guys that are going give us 60-yard touchdowns, but we can move the ball, and there’s nothing wrong with plays that gain 3, 4 or 5 yards.”
•••
Chrismon hurt an ankle on that long drive and backup Frankie Caraccio kept the ball moving until he returned.
“Frankie was in for six or seven plays and we got about 30 yards,” Yow said.
•••
Yow’s message to the team on Monday was simple: “It’s a great win, enjoy it, but don’t be satisfied with winning a ballgame. Let’s get back to work, get better, and win some more.”

West Rowan
Jovon Quarles scored two touchdowns in Monday’s 41-14 win against Central Cabarrus and now leads the county with nine TDs. He’s second in rushing with 872 yards.
Quarles has pushed his career rushing total to 2,243 rushing yards.
•••
Kortez Weeks is right behind Quarles in county scoring with eight TDs. Weeks has had at least one TD in each of West’s five games since he moved back to receiver. He played quarterback in the first two games.
Weeks is making a major impact on the county’s all-time receiving chart. He’s now fifth with 134 career catches, and he’ll soon pass East Rowan legend Johnny Yarbrough (136) and North Rowan’s Dre Byrd (142) for third place. That will only leave Lamont Savage, who had 158 catches in a career split between North and West, and record-holder Seth Wyrick (189 catches at East Rowan) in front of Weeks.
Weeks has 2,140 career receiving yards to rank sixth in county history.
•••
When free safety Malcolm Ingram went down with a knee injury, there was concern that he was lost for the season, but he returned to action Monday and immediately picked off two passes.
West has 11 interceptions in its last five games and has held six of its seven opponents under 100 passing yards. Davie had 159.
•••
After a slow start, the Falcons (6-1, 5-0 SPC) now are leading the county in yards gained per game and fewest yards allowed per game. North Rowan is second in both categories.

East Rowan
Senior cornerback Wesley Porter already has made two all-county teams and he continues to make game-changing plays for the Mustangs (3-4, 2-3 SPC), whether it’s on kickoff returns, forcing fumbles or making interceptions.
Porter’s pick-six decided East’s 8-0 win against Northwest Cabarrus on Friday, and he also had a sack.
“He does it in the games because he also does it in practice every single day,” East coach Kenneth McClamrock. “He makes plays. That’s just what he does.”
•••
The Mustangs logged their first shutout in a league game since they blanked North Iredell in 2012 in the North Piedmont Conference.
•••
Northwest Cabarrus did a fine job against Max Wall, holding him to 67 rushing yards, but Wall still went over 1,000 yards for the second straight season. He has 1,038.
•••
Penalties crippled East’s offense on Friday, wiping out, among other things, a long run by David Broaddus and a nice completion from Justin Smith to Steven Hardin.
•••
Tate Houpe was a bright spot. Five of his six punts were strong, and he got off a 52-yarder in the first half.
•••
East has given up 300-plus rushing yards twice, but East’s pass defense has been good.
East hasn’t allowed an opponent to throw for more than 65 yards in any of the past four games. That stat will be challenged by Weeks and West Rowan QB Payne Stolsworth this Friday.
•••
One of the receivers East contained on Friday was Ben Coates III, the son of Ben Coates, the Livingstone star who went on to be a Super Bowl champion and a five-time Pro Bowler. Coates had 50 receiving TDs in the NFL.

North Rowan
North Rowan will be heading back to the 1A ranks next season, but it’s been a good run in the 2A Central Carolina Conference for the Cavaliers. North is 15-1 in the CCC the last four seasons with the only loss so far coming to Thomasville in 2015.
North takes on West Davidson on Friday. That’s a program that North demolished in 2013 and 2014, but the Cavaliers had to fight for a 13-0 win last season.
•••
A 20-14 win against Lexington established the Cavaliers (5-2, 1-0 CCC) as one of the favorites in the CCC, but East Davidson continues to play well and is 6-1.
•••
North has improved tremendously — offensively and defensively — from 2015.
North has scored 171 points. Last year through seven games, North scored 126.
North has cut its points allowed through the first seven games from 208 in 2015 to 117.
North was 2-5 at this point last season.

Salisbury
The Hornets got rushing touchdowns from Trell Baker and Marcus Corry but lost 24-14 to East Davidson, largely due to special-teams breakdowns.
Salisbury had a punt blocked, was the victim of a surprise onside kick to start the second half, and had a holding penalty that wiped out a long kickoff return by Tyvion Wood.
•••
On the positive side, the Hornets (1-6, 0-1 CCC) fought back after trailing 24-0.
Quarterback Tyquan Jones returned for his first action since the Sept. 2 loss to Carson and provided a spark with 127 passing yards and 48 rushing yards.
•••
Jones and Griffin Myers combined for 171 passing yards for, by far, the Hornets’ biggest aerial assault of the season. Joe Steinman (six catches, 103 yards) and Will Taylor (five catches, 45 yards) had career games.
•••
Salisbury allowed zero passing yards (on four attempts) to East Davidson, but the Hornets gave up a season-high 286 rushing yards.
•••
Friday’s game with Lexington is homecoming for the Hornets.

Carson
Filling in at quarterback, fullback Cole Sifford had 96 rushing yards, but Carson (3-4, 2-3 SPC) dropped its third game in a row when it fell to South Rowan, 19-16, on Friday.
Concord is next, so it’s not going to get easier for the Cougars.
•••
Sifford was playing quarterback because this was a week when Owen White had a baseball commitment.
White is a good football player and a good basketball player, but there’s no doubt baseball will be his long-term sport.
White, a junior who is 6-foot-3 and throws in the low 90s, is ranked as the No. 16 prospect nationally in his class and is ranked No. 5 among right-handed pitchers.
White starred for the South Charlotte Panthers at the WWBA Underclassman World Championships in Florida. He threw only 30 pitches but struck out five of the six hitters he faced from Team Mississippi. At the plate, White contributed a two-run triple in a 10-0 victory.
•••
Carson is proficient at two-point conversions and went 2-for-2 against South Rowan. Carson’s standard two-point play is a pass to Isaac Bell, and he caught his fourth conversion of the season. Cameron Rayfield, normally on the defensive side of the ball, got his second two-pointer.
Bell stays busy. The all-county long snapper last year, he’s also the student body president.
•••
Brenden Westbrook picked off his fourth pass for Carson. He’s second in the county behind West cornerback Deyquan Byrd, who has five.
The school record is in reach for Westbrook. Derrick Sewell had six picks in 2009 to set the Carson mark.
•••
Safety Andrew Jerman, a track sprinter, played some offense for the first time on Friday — and scored a touchdown.

A.L. Brown
The Wonders (6-1, 2-0 MECKA) have won two straight tough games by a field goal. They beat Robinson, 17-14, last Thursday night.
•••
The Wonders had their most productive passing night of the season against Robinson with 150 yards, including a dramatic Zac Williamson-to-Lewis Harris pass that pulled the game out in the final minute.
Williamson, a backup when Cordarius Butler was hurt on opening night, continues to be a fine leader and he’s thrown eight TD passes and only two interceptions.
•••
The Wonders have never lost to Robinson in 12 meetings, a string that includes wins in the state playoffs in 2004 and 2009.
•••
Not surprisingly, A.L. Brown’s offense hasn’t scored as many points as last year when it had Damon Johnson, Jayln Cagle and Sandon McCoy, but the defense has been even better, improving from 86 points allowed through the first seven games of 2015 to 82 this year.
Eligah Hall has 17 tackles for loss, including nine sacks. Najee Williams has 15 tackles for loss, including seven sacks. Kalil Tate has 12 tackles for loss.