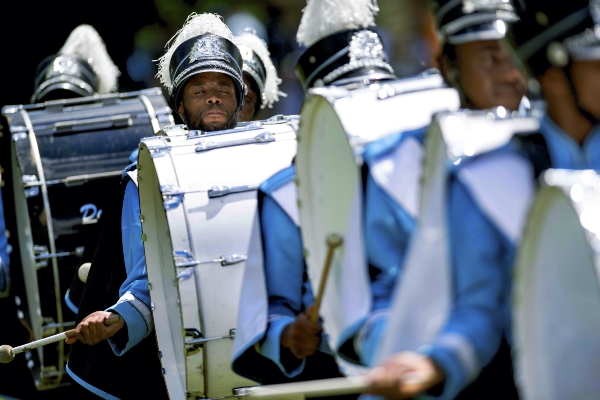 SALISBURY – When Bishop Dennis V. Proctor was a student in high school, he excelled in football, basketball and track and field. But when he got to Livingstone College, instead of running over opponents on the gridiron, he did his work in the stands and on the field at halftime as drum major for the Blue Bear Marching Band from 1972 to 1976.

Proctor will be among hundreds of Livingstone alumni who return to campus this weekend for homecoming and to celebrate the 50th anniversary of the marching band. When Proctor served as field general, the name was Blue Bear Marching Band. Today, under the direction of Anthony Jones, they’re called Blue Thunder.

“I was a percussionist but I didn’t play,” Proctor recalled in a telephone interview. “I just came in and started choreographing the moves that a good drum major is expected to have. I jokingly tell people I danced my way through college. I didn’t enter the ministry until law school.”

Proctor said he’s excited about seeing former classmates with whom he played in the band under director James Evans and later Henry Duncombe. Many of them, including Dr. Jylla Moore Tearte, a former head majorette, have remained close since they graduated from Livingstone, There was some chatter about the former band members getting together this weekend to perform as a “reunion band,” however, that was never formally organized, Proctor said. Even so, he said he can’t wait to hear the Blue Thunder band under Jones, and he’s committed to doing everything he can to support current band students.

“I don’t know what the vision of the band director is, but I just want to be supportive of his vision and the current program,” said Proctor, a member of Livingstone’s board of trustees and this year’s homecoming parade grand marshal. “All of us need to be supportive with our presence and our dollars.”

Jones said he plans to recognize Proctor and other former band members in attendance at this Saturday’s game against CIAA rival Shaw University, which begins at 1:30 p.m. inside Alumni Memorial Stadium. There will also be a “Battle of the Bands” immediately following the game inside the stadium. That event, always popular at any college, will feature at least nine high school bands from the Carolinas and Georgia who will strut their stuff on the field in hopes of being crowned the best.

Among the North Carolina bands to compete are Salisbury, North Rowan, High Point Central, High Point Andrews, Independence, Harding and Vance high schools. From neighboring South Carolina, Fairfield Central High School’s band will perform. And from Georgia, South Gwinnett High School will try its hand at winning the coveted title of best band. Not only will those high school bands vie for bragging rights after the game; they’ll perform that morning in Livingstone’s homecoming parade, which begins at 10 a.m. at Soldiers Memorial African Methodist Episcopal Zion Church at 306 N. Church St. and culminates on campus.

“I’m honored to be director of Livingstone’s Blue Thunder Marching Band during its 50th anniversary year, which is quite historic,” Jones said. “We’re hoping for great weather and are very excited about all of the high school bands that have accepted our invitation to perform in our parade and to compete in the battle of the bands after the game. Of course, I’m also excited about the opportunity for Livingstone’s band students to showcase their talent and the dynamic sound we’ve worked so hard this season to produce.

“Additionally, I’m grateful to Bishop Proctor and all of the other former band members who will be here this weekend to support us,” Jones continued. “And I’m extremely grateful to Dr. Jimmy R. Jenkins Sr. for his continuous support. Anyone who loves and appreciates good bands, great music and the significance of HBCU marching bands shouldn’t miss the opportunity to attend our parade and game on Saturday. It promises to be a musical extravaganza.”

Jones said as his way of honoring the former band members, he plans to ask them to stand during halftime of the Blue Bears’ game against Shaw. He said he’s appreciative of former leaders like Evans and Duncombe, who led the band for several years after Evans, for laying the foundation that has allowed him to continue the proud tradition that has become Blue Thunder.

Duncombe, who passed away last year, will be honored at halftime of Saturday’s contest. From Alabama, Duncombe came to Livingstone and helped put its marching band on the map. Under his direction, Livingstone’s band marched and performed at halftime of a Washington Redskins football game, Jones said.

“When Mr. Duncombe came to Livingstone, I was already the drum major,” Proctor recalled. “He had graduated from Alabama State University in historic Montgomery, Alabama, where his brother was the band director, so we did a lot of recruiting from Alabama, Charleston, South Carolina, and Cleveland. The school honored me to be one of the recruiters traveling the country to attract students. I think we had about 150 students in the band at our pinnacle.”

In addition to his bachelor’s degree in political science from Livingstone, Proctor has a law degree from The Ohio State University, a master of theology from Ashland Theological Seminary in Ashland, Ohio, and a doctorate of ministry from United Theological Seminary in Dayton, Ohio. His wife, Diane, earned her undergraduate degree in intermediate education from Johnson C. Smith University in Charlotte and the two often banter about whose band is best – Livingstone’s or JCSU’s.

On Saturday, Cal Walker, Proctor’s childhood friend and a former SGA president at Livingstone, will ride with him in the parade. “Normally I’d ask my wife to ride with me, but Cal just successfully completed a stem cell transplant, and he overcame T-cell Lymphoma cancer. He was a cymbal player in the band and later became our band announcer, so I think having him ride with me is a great way to celebrate him.”

Jones said all of that is music to his ears.

“I’m so happy that Bishop Proctor, Mr. Walker, Dr. Moore Tearte and other former band members are excited about returning to their alma mater this weekend and about commemorating the 50th anniversary of the band,” Jones said. “My goal here at Livingstone is for Blue Thunder to become a household name just as other HBCU marching bands across the country have become. I’m confident that with Dr. Jenkins’ strong backing, my goal will come to fruition and the people of Salisbury, the people of North Carolina and indeed people all across our great nation will benefit from getting the chance to hear the excellence of Blue Thunder.”