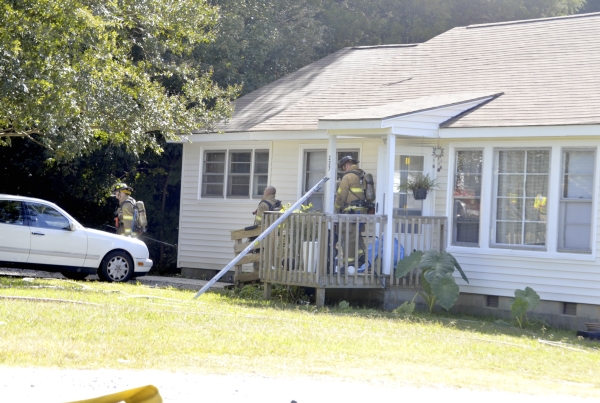 Firefighters leave a home at 227 Clancy St. Wednesday after the homeowner believed they saw smoke from the heating unit that turned on for the first time this season. Fire officials confirmed the smoke actually came from an electrical unit. No fire was visible. Shavonne Walker/Salisbury Post

SALISBURY — Salisbury firefighters responded to a Clancy Street home when the homeowner spotted smoke after turning on the heating unit for the first time this season. Fire officials say the cause was actually an electrical issue.

Smoke was spotted just before 11:30 a.m. Wednesday at 227 Clancy St., a block from Clancy Hills Apartments.

Fire Battalion Chief David Morris said fire crews initially believed the heating unit was causing the smoke since the homeowner told them she’d just turned the heat on for the first time this fall. The smoke was the result of a malfunctioning electrical outlet.

“She said she saw a haze in the house,” Morris said.

She contacted the fire department, and he said it was good that she did.

Morris said oftentimes when the seasons change and homeowners turn on their heating units for the first time there can be a burning smell and sometimes light smoke. He said the smoke and burning smell comes from the dust heating up on the coils of the unit.

He advises anyone who sees or smells any smoke to call the fire department if they are concerned. He said it’s better that a fire crew responds and it be nothing than it develop int a potential house fire.