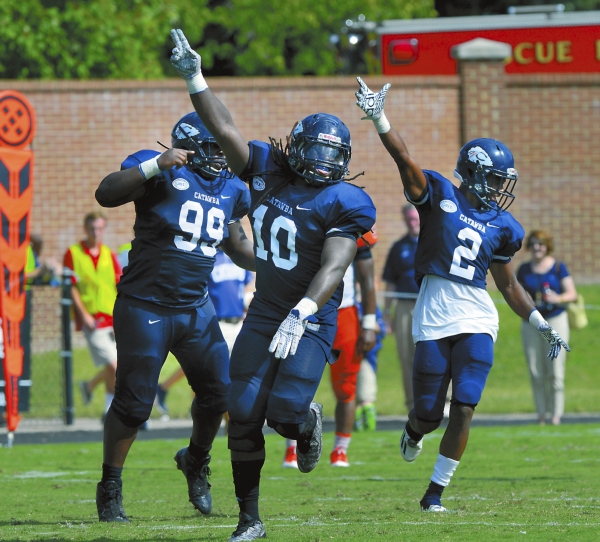 Wayne Hinshaw/for the SalIsbury Post... Jordan Hemingway (99) joines in the celebration of a fumble recovery against Carson-Newman with Trey Evans (10) and Case Woodard (2). Hemingway, a nose guard from Loris, S.C., is called “Bull” by his teammates.

SALISBURY — “Bull” is what his teammates call Catawba nose guard Jordan Hemingway, and it’s not because he likes to shoot the breeze after practice.
It’s a complimentary nickname that Hemingway hauled with him to Catawba from Loris, S.C., a community about 30 miles north of Myrtle Beach. Playing for the Loris High Lions, Hemingway demonstrated bullish traits.
Like a bull, Hemingway was powerful, strong-willed and unbending, and Loris defensive coordinator Adrian Grady dubbed his prize pupil with a moniker that stuck.
“I think the name came mostly from the way I would bull-rush offensive linemen,” Hemingway said.
Hemingway was a fierce high school player at Loris where his head coach was Jamie Snider.
Snider spent nearly two decades coaching with David Bennett, first at Catawba, and then at Coastal Carolina, so Loris has links to Catawba.
Grady, Hemingway’s mentor, also has firm ties to Catawba, as he starred on Coastal Carolina defenses coordinated by Curtis Walker, now Catawba’s head coach.
Hemingway had offers from Newberry and Catawba prior to his senior year, but then his final prep season was so spectacular — Loris player of the week five times, 28 tackles for loss, region defensive player of the year — that more schools got involved in recruiting Hemingway, who was a fine student. Loris lost only twice Hemingway’s senior year, with both losses coming to state champ Dillon.
“When you play at a small school, you play with a chip on your shoulder,” Hemingway said. “Especially my senior year.”
The only knock on Hemingway was his lack of height. He’s 5-foot-11, and that labeled him as a D-II player. So ultimately it came down to Catawba and South Atlantic Conference rival Newberry.
“Even with the ties the Loris coaches had with Catawba, I was still leaning toward Newberry,” Hemingway said. “But that was before I gave Catawba a chance. Once I visited Catawba, there wasn’t any way I was going anywhere else.”
So “Bull” unpacked his bags in Salisbury. He didn’t get to redshirt in 2015 as a true freshman, as Catawba needed him for depth behind starting nose guard Jonathan Jean, a senior.
Hemingway played in nine games. He was only credited with two tackles — Jean had 55 — but he had an opportunity to make adjustments while he learned from Jean and the coaching staff.
“I got a lot of words of encouragement from Jean,” Hemingway said. “It made me feel good when he told me he wouldn’t want anyone else following him at his position. He told me that if I kept putting in the work I could be better than he was.”
The Indians returned nine defensive starters this season, but one of the two new faces in the normal lineup, along with cornerback Cris Page, is Hemingway at nose guard.
“He played quite a bit as a freshman, but he was still learning, and when you’re a freshman you’re still not always confident that you can play at this level,” Walker said. “But his high school coaches told me that once he gets comfortable, he’s going to be very good. Once he gets comfortable, you can yell at him all you want to, he’s still going to be very good. Right now, he’s comfortable. He’s having a really good year.”
Hemingway’s best game of the season came in the muck and mire in Saturday’s ugly, 6-0 loss to Limestone. Three of his six tackles were for loss. He commanded double teams, and if he wasn’t doubled, he was showing up in the Limestone backfield. For “Bull” it was his most impactful game since high school.
Hemingway generally got double-teamed when Catawba (2-4, 2-1 SAC) was in its 3-4 base defense, but when Catawba went to its 4-2-5 nickel package, Hemingway was single-blocked (or unblocked) and did some damage.
“He’s a great football player, very strong,” Catawba guard Quinzavious Sands said. “And a good guy. Like a little brother to the older players.”
Hemingway wears jersey No. 99, which makes him the last name on the roster. He did not play well early against Limestone.
“I missed two tackles right at the start,” Hemingway said. “When we came off the field, the defensive ends (Trevor Bembry and C.J. Barksdale) encouraged me. They told me I could do it. They had confidence in me, and after that I made some plays.”
Hemingway is listed at 285 pounds, but he’s been working out since the summer months, and he’s playing now at a sleek 265 pounds, the slimmest he’s been since coming to Catawba.
That’s not ideal size for a nose, but Hemingway feels light on his feet, he feels comfortable, and he’s performing at a high level.
“He’s a big dude and he’s strong,” Catawba safety Jeremy Addison said. “I don’t have to worry about the middle of the field much. Nothing is coming through him.”
And that’s no bull.
Catawba will be on the bus Saturday morning at 8 a.m. for a 1 p.m. kickoff at Mars Hill. The Indians are eager to prove that this season can still be positive. No one expected a 2-4 start, but the goal is to finish strong.
Walker said there was a serious “pow wow” on Sunday and the team had an excellent practice on Monday.
“Right now the mindset is to get a win,” Hemingway said. “We need this win.”