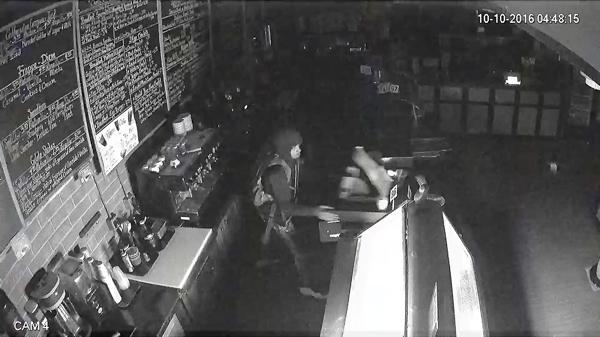 A surveillance camera still of one of the men police say broke into several restaurants.

SALISBURY — Salisbury Police detectives are working to identify two men who they say broke into three local restaurants within several minutes of each other early Monday. The men used a brick to break glass doors at Cici’s Pizza, Outback Steakhouse and the Palms Cafe.

Police Capt. Shelia Lingle said an SUV, possibly a Tahoe, was spotted in surveillance video at the scene of at least one of the break-ins. A Rowan County Sheriff’s deputy, unaware of the break-ins, attempted to stop a white Tahoe speeding out of town. The deputy was not able to catch the vehicle.

Lingle said detectives believe the same two men are responsible for all three break-ins. It appears these are the only three businesses that were broken into, officials said.

Anyone with information is asked to contact Salisbury Police at 704-638-5333 or Salisbury-Rowan Crime Stoppers at 1-866-639-5245 or online at http://tips.salisburyrowancrimestoppers.org to leave a tip. Calls can be made anonymously.