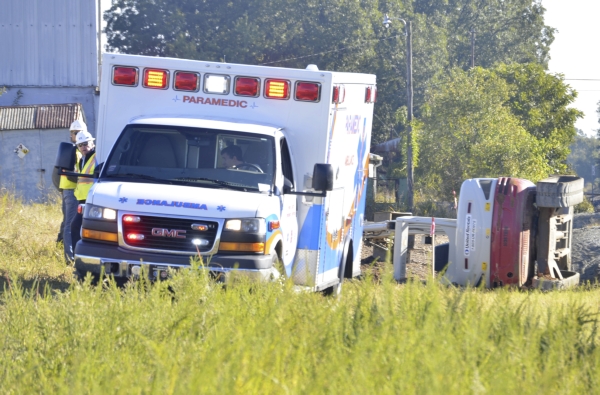 Salisbury Firefighters rescued a Blythe Construction employee Tuesday morning after this backhoe overturned in soft mud. He was unable to get himself out. He was placed into a waiting ambulance and taken to the hospital. The incident occurred at Klumac Road and Old South Main Street where there has been ongoing construction. Shavonne Walker/Salisbury Post

SALISBURY — A worker with Blythe Construction was rescued this morning when the backhoe he was operating overturned.

The employee was working in an area where the ground was soft because of mud and the equipment sank. He had a pre-existing back condition and just wasn’t able to get himself out, said Salisbury Fire Battalion Chief Jay Baker.

The man was freed in minutes by firefighters who placed him on a backboard and put him into a waiting ambulance. The incident occurred just before 9:30 a.m. at Klumac Road and Old South Main Street, the site of ongoing construction.