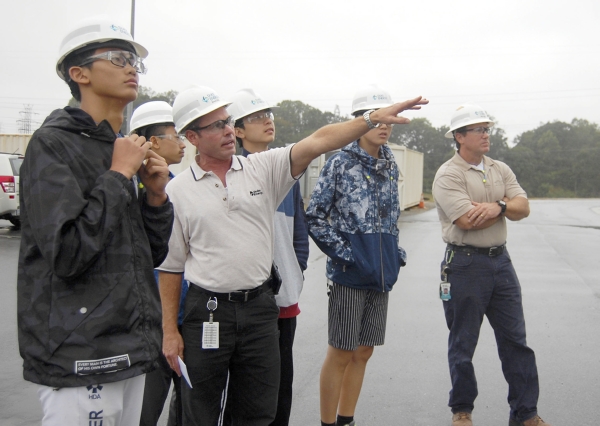 About 19 of the 35 students from Beijing #4 High School in China explored the Duke Energy site on Friday.

The tour started with a presentation on safety, the history of the site and how the company moved from using coal to natural gas.

The students were then broken up into groups and taken around the facility to see the site’s functions in action.

Thornton said 300 of the 3,000 applicants were chosen to participate in the exchange student program. Thirty-five of those students are in schools in Iredell County, including Lake Norman and South Iredell high schools.

“They are expected to be the top of the top,” Thornton said.

The students paid a visit to the Buck site to gather information for an urban research project. They are studying local history, economy and ecology and comparing it all to China.

Thornton said the students were researching things like renewable energy and the daily costs of operating a facility like the Buck site. The students will end up compiling their findings and creating PowerPoint presentations, which will be recorded and sent back to Beijing.

Students said they learned a lot about the site’s combined cycle process.

David Yang said he enjoyed seeing the technology used at the site and learning about how it produced less pollution.

Kevin Yang said he found it interesting that the site used water from the Yadkin River in its cooling tower.

“I learned about how they use water here,” he said.

Other students were impressed with the facility itself.

“Before today, I’ve never been to a place like that,” student Charles Ji said.

Phillip Yang said he didn’t know how a combined cycle station worked or what the machinery looked like, so the tour was eye-opening.

Duke Energy employees served as tour guides for the students and were impressed by how inquisitive the students were.

“I’m just very pleased that they have an interest in it,” Randy Welch, government and community relations district manager, said.

Mike Slate, resource coordinator and one of the tour guides, sometimes fell behind his tour group because of the students’ additional questions.

“They were interested and wanting to learn,” he said.

Brent File, operations, maintenance and technical superintendent and another tour guide, said he hoped he was able to show and explain things to the students that they can take back home.

“The kids were very interactive …” he said. “They were interested in what they were seeing and hearing today.”