Evangelicals stand by their man 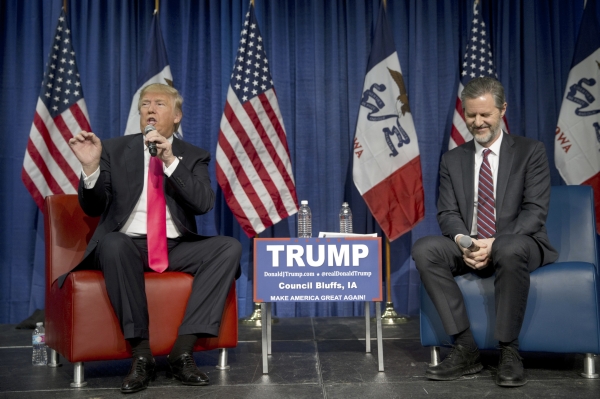 No. 1 among the lessons on display in recent days is the fact that elections are ultimately about enacting, implementing and enforcing public policies. While it’s certainly desirable in a democracy to elect officials who are likeable, honest and morally-centered, the hard truth is that duly elected officials lacking in those qualities get to make policy too.

And so it is that America’s conservative Christian movement is perhaps the most fervent support group for Republican presidential nominee, Donald Trump. If these groups and individuals were to select their candidate of choice from central casting, it’s hard to imagine a more unlikely choice than a thrice-married, casino owning playboy who has bantered with radio “shock jocks” about sexual conquests.

And still, when the chips have been down in recent weeks, the conservative Christian movement has stuck with Trump like glue.

After the first presidential debate, veteran evangelist and former presidential candidate Pat Robertson opined that Trump’s repeated sniffing during the event “may have been a sign of the Holy Spirit coming out of him.”

And this past weekend, after word of Trump’s vulgar 2005 conversation with an entertainment journalist came to light, many Christian conservatives remained stalwart in their support. This is from the Reuters story “Evangelical leaders stick with Trump, focus on defeating Clinton”:

“Gary Bauer, chairman of the Campaign for Working Families, said Trump’s ‘grossly inappropriate language’ does not change the choice facing the country in the Nov. 8 election and that ‘I continue to support the Trump-Pence ticket.’”

Meanwhile, here in North Carolina, we have seen similar stances from prominent conservatives. Here’s the controversial Franklin Graham in a recent interview with the North Carolina Family Policy Council:

What these stances are all about, of course, is the shared belief amongst these groups and individuals that, whatever the nature of his personal peccadilloes, Trump is the candidate most likely to implement policies with which they agree. This is particularly true when it comes to appointing Supreme Court justices, but it appears also to be the case when it comes to foreign policy — an area in which many Christian conservatives find Trump’s rhetoric vis a vis the Muslim world especially appealing.

In other words, what the Christian conservatives in question are about is winning policy battles. They’d undoubtedly love to have a candidate whose personal background is familiar and appealing, but that is way down their list of priorities.

Ultimately, when forced to make a choice, they will always take what they see as the lesser of two evils — all while keeping their eyes fixed on the overarching policy objectives. Sitting out an election and/or rejecting a candidate solely because of his or her personal characteristics is almost never seen as a viable option — no matter how extreme the circumstances.

Schofield is director of research at N.C. Policy Watch.