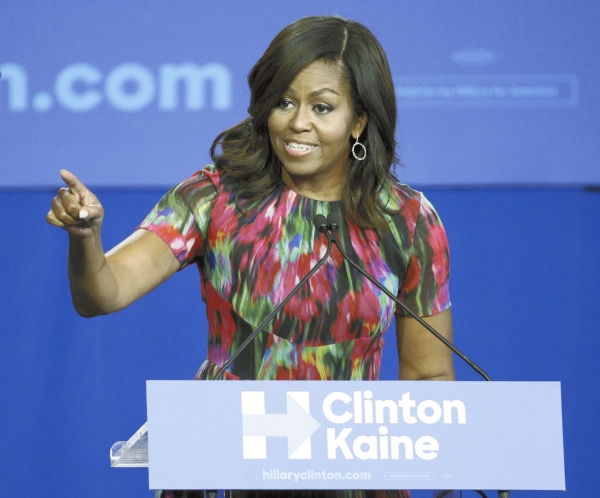 Adam is a young African-American man of our acquaintance who strongly supports Hillary Clinton, but he admits that his friends and contemporaries are far less enthusiastic. A “big, big problem for HRC,” he says, “is the lying. Everyone realizes that she has a habit of bending the truth.”

So can anybody get through to youthful black voters? Yes, he answers quickly. One person.

Unlike her husband, Adam explains, Michelle has not been scarred by eight years of unrelenting political warfare, and she seems to have “little interest in partisan skirmishes, gridlock and empty promises.”

Young blacks particularly appreciate a line Michelle delivered at the Democratic National Convention: “I wake up every morning in a house that was built by slaves.” As Adam puts it, the first lady has “shown young voters of color that she’s not here to play pretend or mince words. She’s the real deal, and can say some of the honest, uncomfortable things the president cannot.”

The Times quoted a survey conducted by Cornell Belcher, a Democratic pollster who specializes in the African-American vote. Seven out of 10 young blacks backed Clinton, a significant drop-off from four years ago, when Obama attracted more than 9 out of 10.

“There’s no Democratic majority without these voters,” said Belcher. “The danger is that if you don’t get those voters out, you’ve got the 2004 John Kerry electorate again.”

Few of these young blacks will vote for Trump; the real threat to the Democrats comes if they stay home, or pick a third option. The Times report captured their sense of resentment against both major candidates — and the whole system.

“What am I supposed to do if I don’t like him and I don’t trust her?” said one millennial woman from Ohio, a key state where Trump holds a small lead in most polls. “Choose between being stabbed and being shot? No way!”

Michelle’s assignment is to convince young voters, especially blacks, that their choice does matter. That there is a real difference between the candidates. That staying home or backing a third-party candidate is a vote for Trump.

She starts from a position of credibility. In the latest Gallup Poll, Michelle’s favorable rating was 64 percent; Hillary averages only about 43 percent.

More importantly, after eight years living in the White House, she is a real expert on the presidency. But she doesn’t carry the baggage of disappointment and defeat that almost always attaches to a two-term president.

“Michelle Obama is the one person that Trump can’t seem to bring himself to attack,” writes Ben Mathis-Lilley in Slate.

Michelle has already made three forays for the Clinton campaign to swing states — Virginia, Pennsylvania and North Carolina — mainly to college campuses. And she often gets a “rock star” reception, reports the Washington Post, a phrase seldom used about the actual candidate.

At George Mason University in suburban Washington, she invoked her experience. “Here’s what I’ve learned about the job,” she told the students. “First and foremost, this job is hard. This is the highest stakes, most 24/7 job you could possibly imagine.”

So get off your duff, Michelle’s saying. To borrow a phrase she used to promote exercise during her husband’s first term, “Let’s move.”

“Elections aren’t just about who votes, but who doesn’t vote,” she told the students at George Mason. “And that is especially true of young voters like you. In fact, in 2012, voters under the age of 30 provided the margin of victory for Barack in four key battleground states: Pennsylvania, Ohio, Florida and right here in Virginia.”

And at North Carolina State, she directly addressed the qualms of young voters like Adam’s friends. “It’s not about the perfect candidate,” she argued. “There’s no such thing.”

The first lady has another target as well: moms like herself. A Fox News poll last month found that 2 out of 3 women have a favorable view of Hillary. In a TV ad promoting Clinton, Michelle uses the words “kids” and “children” a half-dozen times in 30 seconds.

“Hillary will be a president our kids can look up to,” says Michelle, looking straight into the camera. “A president who believes in our kids and will fight for them every day.”

One surrogate cannot decide an election. But in a close contest, Michelle Obama could be Hillary Clinton’s secret weapon.