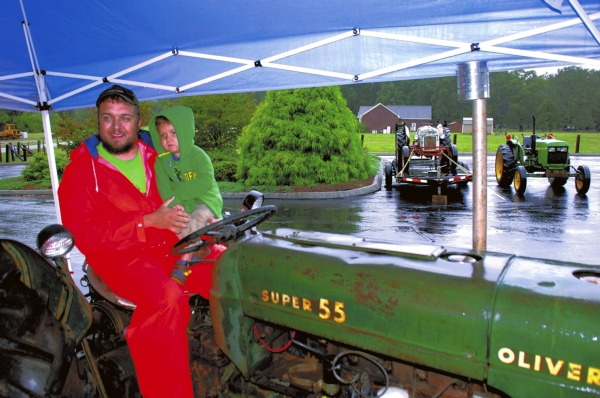 SALISBURY — Austin Mowry, 3, likes tractors the way a lot of boys like fire trucks. He can often look out the windows of his home and watch Chris or Bob Sloop working the adjoining land from a tractor.

It led Sloop to organizing a tractor show Saturday in conjunction with the 8th Annual Fish Fry of Grace Lutheran Church’s Men in Mission. The fish fry benefited Austin and his parents, Allen and Laura Mowry.

Even with the rain-soaked and windy day, thanks to the widespread effects of Hurricane Matthew, the church still sold roughly 1,000 fish plates of the dine-in or carry-out variety.

Austin found time to investigate several of the tractors, including the largest — a monster John Deere 8300 that is used by the father-and-son farming operation of Darrell and Jason Smith.

Austin also enjoyed his time atop the old Oliver Super 55 tractor that once belonged to his great-grandfather, the late Theodore Rector. Theodore was a part-time farmer and full-time rural mail carrier.

The Oliver is still in running condition thanks to some of the mechanical know-how of David Rector and Allen Mowry.

Laura Mowry says her son is currently in a maintenance period with his cancer, but he still faces a long road ahead with treatment. After that, “hopefully, we’ll be in the clear for a very, very long time,” Laura said.

Chris Sloop planned a total of 29 tractors for the show, which was held before the fish fry officially started at 4 p.m. Saturday. Even with the horrible weather, 15 tractors showed up and were on display in a church parking lot.

But the most amazing thing was that all eight tractors that belong or once belonged to the eight Sloop brothers of Grace Lutheran Church were lined up in a row, from the youngest brother to the oldest.

“All of those tractors are still in the community,” said Chris, whose late grandfather Robert was one of those famous Sloop siblings. Robert had a Farmall tractor.

Other models in the row included John Deere, Massey Ferguson, and Allis Chalmers..

For the record, the Sloop brothers, starting with the oldest, were Charlie, Marvin, John, Robert (“Tip”), Albert (“Duck”), Crawford (“Junior”), Otho and Samuel.

Crawford, 92, and Otho, 90, are the surviving brothers. The boys had one sister, Geneva, who was born in between John and Robert. She also has passed away.

Chris Sloop said Charlie was the most serious farmer. He had a dairy operation and was helped on many occasions by his brothers.

But what made the Sloop brothers an interesting lot was how similar their lives played out.

They all worked at Cannon Mills, either in Kannapolis or at the China Grove plant. Geneva did, too. All of their homes were built along Patterson Road, and they ended up living within two miles of each other.

Seven of their eight homes were built from wood cut at their daddy’s saw mill. All eight brothers were life members of Grace Lutheran and filled all kinds of duties at the church.

All but one of the boys served in the U.S. Army. And during World War II, five of the brothers were serving at the same time. Otho became the sixth World War II brother when he was drafted at the war’s end. He served nine months, then later found himself in the Korean War with youngest brother Sam.

All of the boys attended and played baseball at Patterson School. They all worked on their parents’ 300-acre farm as kids and into adulthood.

Their father’s will divided the farm among all the children. He also gave each of the boys two acres on which to build their houses.

The brothers did a lot of gardening, farming, building, hunting and fishing together.

In retirement, the surviving brothers regularly ate at the Blue Bay seafood restaurant on Statesville Boulevard, where they liked to order the Canadian flounder.

Crawford said Saturday he and Otho still go to Blue Bay, about twice a week. In fact, they were there earlier Saturday before the fish fry.

“You can’t have too much fish,” Crawford said.

His Farmall 140 that was on display Saturday is a 1974 model. He used it mostly for preparing his land for a garden.

But Crawford said he gave up on his garden because of all the skunks, groundhogs, deer and raccoons who seemed to be dining on it regularly.

“You couldn’t chase them off hardly,” he said.

But most everything was moved inside this year to the Family Life Center, as the men still fried up 1,500 pounds of whitefish. Rain also cropped up at last year’s fish fry.

“We’re going to be better at rain-feeding than we are at sunshine-feeding,’ said Randy Basinger, one of the cooks.

Beyond the tractor show, the day included live music by The Extraordinaires, raffles for baskets, a 50/50 drawing and hot dogs.

Besides the Sloops, a major family at Grace Lutheran since its founding are the Millers. Chris Sloop says 15 of the 29 tractors he had originally lined up would have represented either the Sloops or Millers.

“The weather situation took a little bit away from that,” Chris said.

But it still was a day for fish and tractors. You can never get enough.