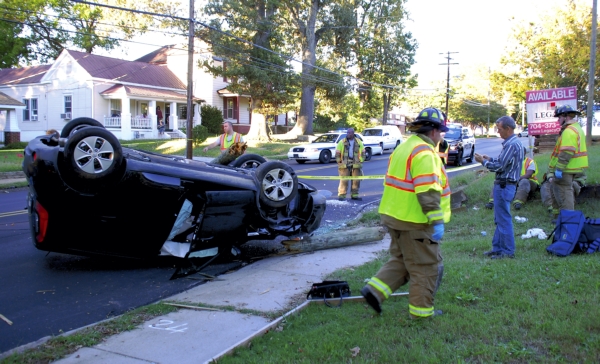 Emergency responders work at the scene of a wreck in which a vehicle overturned Monday. Mark Wineka/Salisbury Post

The car, traveling south, veered across South Main, sideswiped a retaining wall in front of a house, sheared off a utility pole and ended up on its roof. Adam Camacho, an employee at Southeast Beverage, rushed out of the business and reached a back passenger door where the young boy was hanging upside down, still strapped in his seat. Camacho undid the seat belt and easily helped the boy out of the vehicle.

Meanwhile, the couple exited the car from the front. The man was treated on the scene for a cut to his head, but he was up and walking and talking on his cellphone after being bandaged. The boy and woman did not appear to be hurt. Parts of the utility pole ended up under the front of the car and on top of the undercarriage.

Salisbury Police and Fire, along with Rowan County EMS, were on the scene.